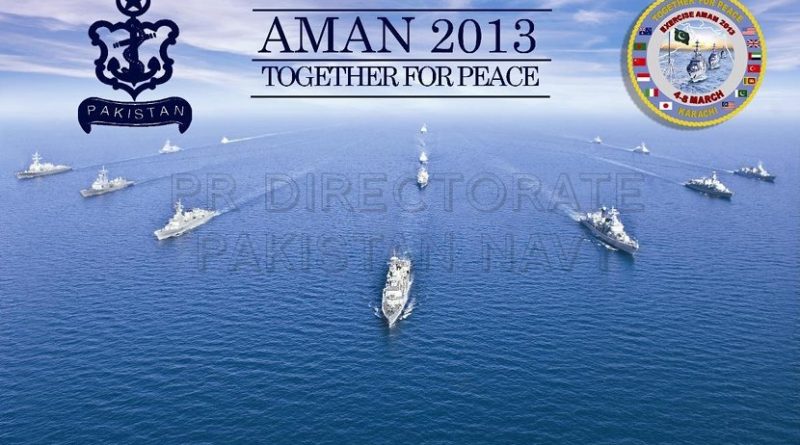 Growing economic potential of the region has increased the maritime challenges for states, like terrorism, piracy, and weapons, drugs and human trafficking. As these challenges are grave and threaten both economic and security interest of all regional states, policymakers seem to be in favour of combined efforts to counter these challenges.

Both regional and global stake holders have realised the significance of real maritime co-operation. Many of them have responded to its significance by resorting to pragmatic ways such as arranging joint naval exercises, highlighting areas of mutual benefits and long term interest. This not only provides a better understanding of maritime domain but also enhances capabilities of the naval forces.

Pakistan, whose dependency on the Arabian Sea route for its trade is over 95 percent, seems vigilant to secure its interests in the Arabian Sea. In addition to the aforementioned maritime challenges, dominance of any regional power can jeopardize other states’ interests and ignite conflict. It is obvious that no power can be able to counter these challenges single-handedly. A multilateral endeavor to overcome all the challenges was the rational demand of maritime security, where states could peacefully cooperate.

This was the prime theme behind launching the series of multinational naval exercise “Aman” in March 2007. Since then Pakistan Navy has been successfully arranging this exercise with a gap of two years between each exercise. Exercise Aman-09 and Exercise Aman-11 were held in March 2009 and 2011 respectively. Aman is basically an Urdu word which means “peace” which clearly reflects the purpose of this exercise i.e., to promote peace among states.

Pakistan hosted the fourth exercise of Aman series, “Aman-2013” from 4th to 8th March, 2013. The exercise was not merely a peaceful show of power or discipline by Pakistan Navy, but it signified the alertness of Pakistan’s naval command to respond timely to the changing geo-strategic realities of maritime domain as well.

In essence the Aman exercise is a demonstration of unified strength against maritime challenges and terrorism. It will not only enhance states’ contribution to regional peace and stability but also bridge up the gap among regional and extra regional naval forces by providing them with a common platform of sharing and learning maritime tactics.

Gradual increase in number of participants in Aman exercise has grown up which shows the growing interest of international community in this series. In the recent one, almost fifty participant states were scheduled; half of them participated with their assets, observers and SOF/EOD teams, whereas the rest were given their consent to participate as observers only. The exercise comprised of two main phases, harbor and sea phase. The harbor phase included flag hoisting ceremony, wreath laying ceremony at Mizar-e-Quaid, maritime conference (IMC-2013), maritime counter terrorism demo by SSGN, cross ship visits, city tours, etc. Moreover, to maintain the interest of observers and intermingling of nations, depiction of their respective cultures through socio-cultural activities like sports events, food gala and international cultural display was also the part of the harbour phase.

The sea phase included purely technical events like go fast exercises, search and rescue exercise, surface firing, anti piracy demonstration, cross deck landings etc. The true significance of these exercises lies in the fact that they would provide equal opportunity to participant navies to find areas of common interests and mutual understanding. Whether it is the blue water navy of United States with a global agenda or Chinese navy aspirant to be blue water navy in near future or regional states which do not have any global or expanding agenda like Pakistan itself, all will be operating on one platform. This would enable them to develop and practice maritime tactics, techniques and procedures against asymmetric and traditional threats during the sea phase of the exercise.

To facilitate the guest navies and observers/scholars during both phases, availability of all necessities had been assured. They could avail mess accommodation with meals and local transport. For guest ships, emergency repair facilities, ferry services, SAR facilities and fresh water during their stay in port were also available.

This endeavor by Pakistan to invite and gather regional and global navies is remarkable. As it would not only set the soft and responsible image of Pakistan as a state, but also give more credibility to Pakistan Navy’s efforts in countering maritime threats. This is especially significant in view of the current critical phase through which the whole Pakistani nation is passing. This peaceful multinational exercise gives an overt message that any effort by miscreants to threaten regional peace and security would be paid in same coin with joint response. Participants from different ethnic backgrounds and geographical locations are together on one platform thus Aman exercise strengthen an old saying “the land divides and the sea unites”.

It is hoped that the exercise Aman will enable participant states to achieve their stated goals. That is, to enhance maritime cooperation among states and help them to maintain regional peace and stability. To counter threats of miscreants, piracy, maritime terrorism, drugs, arms smuggling and human trafficking through a multilateral effort. These threats are common, and countering them requires strong commitment from all states. By resolving to hold this exercise, Pakistan Navy has very well demonstrated its will to counter these challenges in cooperation with other states. Securing sea lines of communication of this region for trade and energy supply is beneficial for all. States have to stand together to gain mutual economic and strategic benefits. That is why, the slogan of Aman exercise states “Together for peace”.