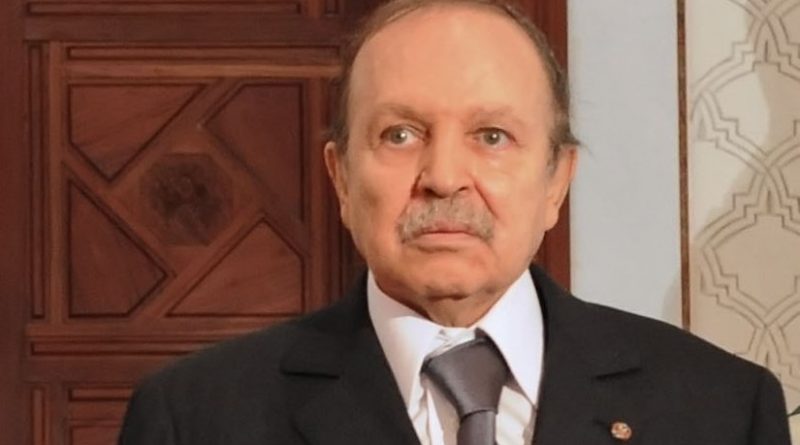 Algerian President Abdelaziz Bouteflika’s campaign manager has formally submitted official papers on Sunday confirming that he will seek re-election, with Ennahar TV saying he had offered to step down after a year if re-elected.

Abdelghani Zaalane submitted the papers at the constitutional council in Algiers responsible for collecting the papers of candidates for the April 18 presidential election. The president also wrote a letter that was read out on state television by Zaalane on his behalf.

The ailing leader vowed in the 11th-hour letter to organize a “national conference” that would set a date for early polls which he would not contest. Ennahar TV said that this would be held within a year.

Zaalane added that Algeria needs to complete its journey towards democracy, development and prosperity.

Bouteflika also vowed to fight all forms of bribery and corruption in his country, and that he would prepare a new constituion that will lay the foundation for the birth of a new Algerian republic.

The president also pledged new policies to redistribute national wealth and end marginalization in his letter. He also called on all Algerians to unite in order to write a new page in Algeria’s history.

“I have heard the pleas of protesters and especially thousands of young people who asked about our nation’s future,” he wrote in his public message.

The comments are likely to be viewed as an attempt to appease those who had taken to the streets for 10 days to protest against the 82-year-old’s plans to remain in office and to allow him an exit on his own terms.

Bouteflika’s statement was his first since the biggest displays of dissent in Algeria since the 2011 Arab Spring uprisings that unseated rulers in neighbouring countries.

In a rare wave of public dissent, Algerians have been taking to the streets since rallies calling on him to step down began 10 days ago. Bouteflika, 82, in shaky health for years, was due to submit his official election papers at the Constitutional Council in Algiers on Sunday, the deadline for candidates.

He need not do so in person, the state news agency APS said. Bouteflika, rarely seen in public since he suffered a stroke in 2013, was at the weekend still in Switzerland for unspecified medical checks, according to Swiss media.

In a sign of a disconnect from the mostly young population, almost 70 percent of which are aged below 30, he communicated via letter, as he has since suffering a stroke in 2013.

Tens of thousands of protesters had been rallying throughout the day in cities around Algeria, calling on Bouteflika not to submit election papers for the April 18 polls, the deadline for which was Sunday.Meanwhile, opposition candidate Ali Benflis announced his withdrawal from the presidential race.

Algeria’s weak and divided opposition and civic groups have called for more protests should Bouteflika, who has been in power for 20 years, confirm his re-election bid.

Opponents say that Bouteflika is no longer fit to lead, citing his poor health and what they call chronic corruption and a lack of economic reforms to tackle unemployment that exceeds 25 percent among people under the age of 30.

But analysts say protesters lack leadership and organization in a country still dominated by veterans, like Bouteflika, of the 1954-62 independence war against France.

Thousands of students gathered at several university faculties, one of them near the Constitutional Council where presidential candidates file their papers, chanting: “No to a fifth term!” or “A free and democratic Algeria!”

There was heavy security around the Constitutional Council, and police prevented restive students from leaving the campus nearby, keeping the main gates shut. But some students were seen later marching outside.

“We will not stop until we get rid of this system,” said Aicha, a 23-year-old student. Many university graduates face joblessness in an economy dominated by the state.