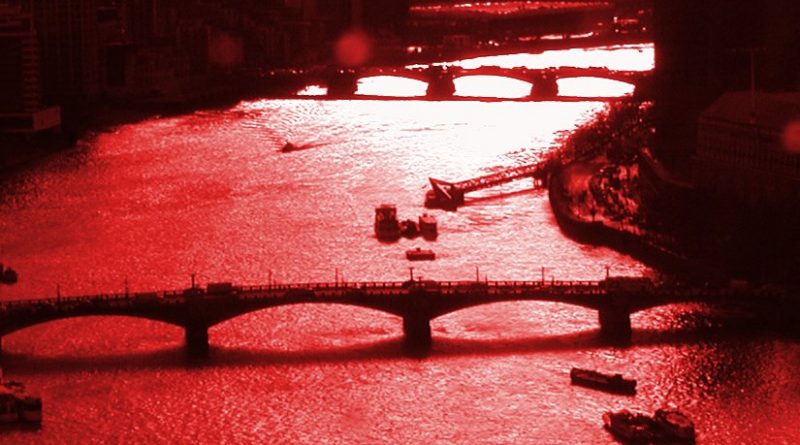 At 10:30 pm on Saturday June 3, London witnessed the latest in a string of jihadi terror attacks that have so far hit Afghanistan, Iraq, and Manchester. ISIS has also taken over the town of Marawi in the southern Philippines, showing that as its central state is rolled back inch by inch it has the potential to expand elsewhere.

The attack on London Bridge saw 7 people killed by being run over by a white van or stabbed by the three terrorists who then went on a stabbing rampage that ended in Borough Market. British armed police arrived on the scene in 8 minutes from the time of the alert, where they shot all 3 men dead, who were wearing what turned out to be fake suicide vests.

The attacks struck at another landmark in the capital of the West’s home to parliamentary democracy; London Bridge is a landmark with deep historical significance, and to launch an attack on it was an attempt to reach the same level of psychological impact as that on Westminster Bridge back in March. Borough Market is a popular tourist and local attraction, and is always full of people. If the attackers had managed to obtain AK-47’s or another similar firearm, or indeed if they’d actually had real suicide vests, the death toll could have been catastrophic. As it was, the country is grateful that they only had a vehicular missile and blades to finish the job. That is what we’ve come to in the West.

What we are seeing is, as Maajid Nawaz and others have described, a full blown global jihadist insurgency. The jihadists have taken their campaign of terror beyond mere terrorism and have elevated it to the levels of highly decentralised, insurgent, Fourth-Generation warfare.

Through the communications networks of the internet they are able to coordinate and contact each other constantly and at speed. If they use anonymising software like VPN’s or Tor, or particularly Telegram, a private messaging service with end to end encryption that is extremely difficult to monitor or hack into, then they can reduce their visibility online, making them harder to track.

This makes it easier to create what Marc Sageman calls ‘leaderless networks’, where groups of jihadists can operate at a level of autonomy and without the need for a central command hierarchy dictating their every move that has never before been seen, and is a boon for the terrorists while proving a nightmare for our security services and governments.

Added to this, recruitment to the insurgency is facilitated by the easy dissemination of radical Islamist propaganda and ideological material via the internet: through jihadi websites and forums, through oil rich Saudi-funded Salafi organisations who spread their puritanical form of Islam to millions in the West through the use of their own websites, YouTube and other video sharing platforms, and through satellite TV channels that host hate preachers who regularly call for the genocide of Jews. ‘heretical’ Muslims and non-Muslims. This gives ideological fuel to those who wish to access it, both online and through the network of Saudi affiliated Salafi and Deobandi mosques that have proliferated across the country; the Didsbury Mosque where Salman Abedi worshipped hosted preachers who called for Sharia Law and the destruction of the West.

As Kenan Malik and Nawaz argue, this has been going on for decades and stretches back to the 1980’s if not earlier. Thanks to the politics of multiculturalism instantiated in the 80’s, there has been a growth in communalism in the UK with each minority group progressively cutting its ties with mainstream society, reverting to cultural norms that might best be left in the middle-ages, while being represented by self-elected speakers who often have ties with organisations who represent the most extreme views present within those communities. This particularly pertains to the Muslim community in Britain, where although not all Muslims buy into this radical form of Islam, many in the younger generation certainly do.

A recent example of how this communalism backfires comes in two forms: the head of the government’s Prevent counter-extremism strategy in Manchester, Samyia Butt has been discovered to be affiliated with Muslim Engagment and Development, (Mend) an organisation that has shown support for extreme Islamist positions and includes ISIS imagery in its campaign posts. In order to avoid confusion, an official in charge of the government run counter-extremism scheme is herself affiliated with an extremist Islamist organisation. And this in the city where the Manchester bomber lived and who attended Salford University whose official policy is to boycott Prevent.

This situation is replicated across the country with Muslim organisations falling prey to the Salafi Islamist ideology that is pumped around the world using Saudi oil money. Seen in this light, the fact that the number of jihadis in Britain that are on the security services’ radar stands at 23,000 is perhaps no longer inexplicable, even while remaining a shockingly high number. By the way, 3,000 of that number apparently pose a high risk, while the rest pose a ‘residual’ risk. Salman Abedi, the Manchester bomber, was a ‘residual’ risk.

This is what we in the West and around the world are dealing with. We are facing a motivated foe which has the means to communicate with each other; the means to operate in a diffuse, decentralised manner with a lack of hierarchy and who operate in small units and sub-networks that makes it harder to get a grip on them; the means to obtain funds to further their campaign against those they deem the infidel; who are able to manipulate the media and online platforms to wage psychological warfare against us; who carry out genocidal attacks on civilians (the Yazidis and Middle-Eastern Christians) in order to further terrify while desensitising us and who attack significant landmarks and public areas and populations to further affect us psychologically, economically and politically.

If we do not wake up, London and the rest of the world will continue to burn.

About the author:
*Henry George studied for a History BA at Royal Holloway, University of London. He then studied for a War Studies MA at King’s College London, focusing on ISIS inspired terrorism and Fourth Generation Warfare for his dissertation. He also blogs here, focusing on issues surrounding identity politics, political philosophy, free speech and cultural issues broadly linked to the West’s decline. He can be reached on Twitter at @intothefuture45.