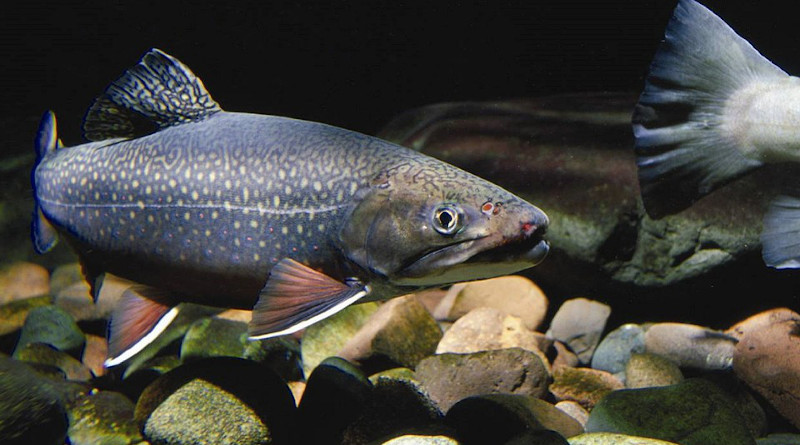 The Latin name for brook trout — Salvelinus fontinalis — means “speckled fish of the fountains,” but a new study by Penn State researchers suggests, for the first time, that the larger streams and rivers those fountains, or headwaters, flow into may be just as important to the brook trout.

With few exceptions, brook trout are found now only in small mountain streams that stay cold enough year-round to meet their biological needs, below 68 degrees Fahrenheit. Because these trout in the United States are threatened by a warming climate, many have assumed those headwater habitats alone are critical for their survival.

But a genetic analysis of brook trout in streams across the 460-square-mile Loyalsock Creek drainage in north-central Pennsylvania shows that the fish are very similar genetically, suggesting close relatedness among populations. The only way that could have happened, according to researcher Shannon White, postdoctoral scholar in the College of Agricultural Sciences, is fish moving between tributaries in the 86-mile-long Loyalsock Creek.

Temperatures in Loyalsock Creek exceed brook trout thermal tolerance from approximately June through September, White pointed out, so fish are believed to inhabit only the bigger river system during the winter. Although the behavior and survival of brook trout in Loyalsock Creek are not well understood, researchers hypothesize that some brook trout move into the mainstem after spawning in a tributary in October or November and stay until late spring, when some swim up new tributaries.

“It’s pretty simple — if widespread populations are related genetically, it indicates that fish are moving around between those populations,” she said. “There’s a high degree of genetic connectivity between populations separated by the mainstem, and that indicates that brook trout are swimming into Loyalsock Creek and using it as a movement corridor to connect populations in other tributaries.”

Understanding patterns of population connectivity is critical for species conservation, White added, because populations that are more connected typically are able to survive and adapt to disturbance and stress.

To build what White called “a family tree” of brook trout in the Loyalsock drainage, researchers collected 1,627 adult brook trout from 33 sites, with an average of 49 individuals collected from each site. They clipped the caudal fins of those fish and conducted genetic analysis on those tissue samples.

To estimate statistically how unique habitat features, such as road culverts and waterfalls found in streams, influence the movement of wild brook trout, researchers developed what they call the “bidirectional geneflow in riverscapes” model as part of a practical framework that uses genetic data to understand patterns and drivers of fish movement.

The novel modeling approach is significant, explained researcher Tyler Wagner, adjunct professor of fisheries ecology, because it shows that brook trout — at least in the Loyalsock Creek watershed — are not confined just to the headwaters. They are using the mainstem as a seasonal, thermally suitable corridor for movement.

There is no reason to expect that the Loyalsock drainage is different from others in the East, Wagner contends, so these results likely have implications for the conservation and management of wild brook trout. Specifically, these results suggest that conservation of larger streams and rivers may be necessary to protect and conserve critical brook-trout movement corridors that keep brook trout populations healthy.

“Some of the most fundamental questions in ecology relate to how organisms move through their environment,” said Wagner, who is assistant leader of the U.S. Geological Survey’s Pennsylvania Cooperative Fish and Wildlife Research Unit at Penn State. “These questions historically have been hard to address in fishes because it can be difficult statistically to estimate how unique habitat features found in streams and rivers influence movement. To address this void, we developed the riverscapes geneflow model.”

The findings of the Penn State study, recently published in Ecological Applications, contrast with other research related to brook trout behavior, White conceded. The consensus has been that trout do not move very far, she said. “But Loyalsock Creek is a fairly big watershed, and we have found that fish are moving quite a bit, and populations on opposite ends of the watershed are connected to one another genetically.”

However, White, who conducted a wide range of research on the brook trout population in the Loyalsock drainage while pursuing her doctoral degree in ecology at Penn State, noted that only a small proportion of the fish travel — and it is not just the young males that branch out. This is different from most wildlife species.

“In a separate study we used telemetry to monitor the movement of 162 fish and found that there is a small proportion of the population that moves,” she said. “It’s only about 20% of fish that get into Loyalsock Creek. In terms of males, females, and the size of fish that are moving, it doesn’t really seem to make a difference. This would suggest that there may be a genetic component to movement, in the sense that some fish have genes that are programmed to make them travel.”