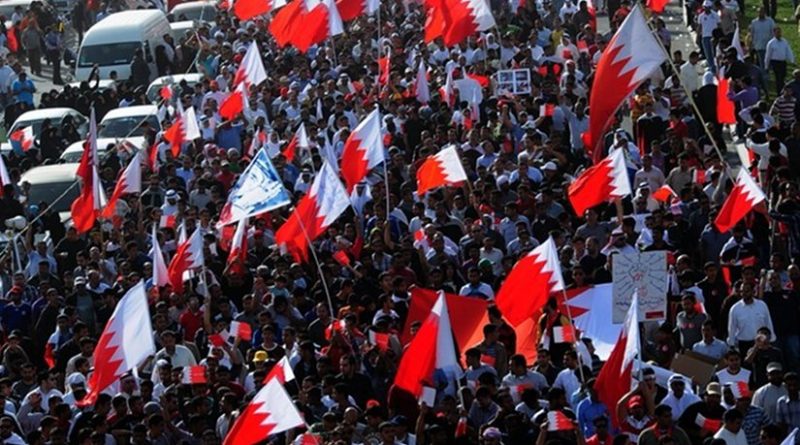 Over 100,000 people in Bahrain taking part in the "March of Loyalty to Martyrs", honoring political dissidents killed by security forces. Photo by Lewa'a Alnasr, Wikipedia Commons.

That is the playing field on which long existing relations between Israel and status quo powers, primarily in the Gulf, as well as in Jordan and Egypt, have grown far closer and more overt. Closer relations are primarily based on perceived common interests in stymying Iran as well as political change. It’s an alliance in emergence, particularly with the Gulf, that irrespective whether it results in formal diplomatic relations as already is the case with Egypt and Jordan or may soon occur with Bahrain, is likely to be fragile, not because the parties view it that way, but because far-reaching change on the Arab side is inevitable.

The parameters and dynamics of what the Middle East is experiencing and the risks Israel runs with the alliances it is cementing centre on five fundamental developments or disputes:

The roll back of the 2011 popular revolts by a UAE-Saudi led counterrevolution has prompted many to write off the chance for democratic change in the Middle East and to refer to the uprisings as the Arab winter. That may prove to be a short-lived analysis. For one, it’s a mistake to see the revolts as a quest for Western-style democracy. Rather, they were a quest for dignity, greater freedoms and liberation from corrupt, nepotistic regimes that, with few exceptions, had failed to deliver in terms of public goods and services. Those revolts may or may not have succeeded in the longer term but ultimately, they were prematurely defeated by domestic status quo forces backed by the UAE and Saudi Arabia, whether it is the 2013 military coup in Egypt, Saudi and UAE intervention in Yemen, or UAE and Egyptian backing of General Khalifa Haftar in Libya. To be clear, Qatar was a player in this too.

The legacy of the revolts is far greater than simply defeat or failure. It has changed mentality and attitudes. The quest for change is alive and kicking. That is not to say that masses of people are about to take to the streets again – despite recent months long protests in the Rif in northern Morocco. Events in Syria, Iraq, Libya and Yemen may by and large have for now chilled the quest for revolutionary change. So has severe repression across the Middle East. The desire for change is however alive and kicking in social media.

It is also alive in kicking in the radicalization of Arab youth, who make up the bulk of jihadists in Syria and Iraq. The Islamic States is on the verge of territorial defeat in Iraq and Syria, but that only means that political violence will no longer have a central address; it will be more decentralised, more amorphous, more spread out, and probably more lethal. Political violence has been a fixture of human history, but blunting its current phase will take a lot more than military might and law enforcement. It will take economic and social policies as well as forms of governance that are inclusive rather than exclusive.

Which leads to the third legacy of the 2011 Arab revolts: the future of Middle Eastern nation states as they were known until now.  Neither Iraq nor Syria will return as nation states in the borders prior to 2011 in Syria or 2003 in Iraq when the United States invaded and toppled the regime of Saddam Hussein. The independence referendum in Iraqi Kurdistan is part of a global battle whose outcome will determine the ability of small states to chart their own course in the shadow of a regional behemoth, whether that is Saudi Arabia in the Middle East or China in Asia. It parallels the efforts by peoples like the Catalans in Spain, the Kurds in Syria, or Ambazonians in Cameroon to secede and form independent small states of their own. It also parallels the dispute in the Gulf between Qatar and various other Gulf states.

Most conflicts in the Middle East have a pot blames the kettle quality, but no one dispute more so than that between Qatar and a UAE-Saudi-led alliance of financially and politically dependent states. At the heart of the crisis are four issues: the ability of small states to chart their own, independent course; diametrically opposed perceptions of national security threats; fundamentally different strategies for regime survival; and radically differing definitions of what constitutes terrorism and who is a terrorist.

Also at the heart of both the Gulf crisis and the Saudi-Iranian rivalry are opposing approaches to political or activist forms of Islam. We can go in question and answers into greater detail about the Gulf crisis. Qatar has the naïve belief that it can support political change anywhere in the Middle East while at the same time ringfencing itself as well as other Gulf states from the fallout. Qatari support as well as its soft power strategy has meant that it has maintained contact and/or supported a host of militant groups, in some cases with the approval of the United States, as well as Islamists. It was a policy that clashed with that of the UAE, first and foremost, which sees any form of political Islam as a threat and under the influence of the UAE with Saudi Arabia’s evolving threat perception.

Fact of the matter is that all the Gulf states have maintained and/or supported militants and Islamists; no country more so than Saudi Arabia, not only in Syria and Iraq. Saudi Arabia and Iran have been involved in a covert war for the past 40 years. It is a war that explains much of Iranian actions today. Yet, Saudi Arabia is fighting an uphill battle. Its future in the Middle East is that of a second fiddle state. There are three major powers in the Middle East, Turkey, Iran and Egypt, and Israel, in certain regards. Turkey, Iran and, Egypt have what Saudi Arabia does not: large populations, huge domestic markets, industrial bases, highly educated populations, and deep-seated identities grounded in histories of empire. Iran, moreover, has resources. Saudi Arabia has oil and Mecca, not enough to compete. Saudi Arabia is a regional power because of past containment policies towards Iran. Once Iran is unfettered, it will unlikely be able to compete for long.

A major aspect of the Saudi-Iranian rivalry is the ideological and religious battle that Saudi Arabia has waged for the past four decades, the fallout of which is being felt across the globe. Saudi Arabia has invested an estimated $100 billion to promote Sunni Muslim ultra-conservatism. To be clear, the bulk of that money did not go to militants, it went to religious, cultural and educational facilities that Saudi Arabia largely did not micro-manage or control. There are only a handful of countries where the Saudis funded violence: Afghanistan, Pakistan, Bosnia, Iraq and Syria. Also to be clear, ultra-conservatism does not by definition breed militancy but it does create an enabling environment in conjunction with other factors, first and foremost lack of social and economic opportunity.

The blowback of ultra-conservatism is felt in the kingdom as is evident in the economic and social transition Gulf states are embarking on. To put the transition in perspective, keep in mind that every person born in the Gulf today is likely to witness the end of oil in his or her lifetime. Economic streamlining and diversification was long overdue but was made unavoidable by the drop in oil prices sparked by Saudi oil policy that focussed on market share rather than price.

Economic reform and limited social change but no political liberalization amounts to ruling families unilaterally rewriting social contracts by rolling back the cradle-to-grave-welfare state. The reforms cater to aspirations of significant segments of the youth who constitute the majority of the region’s citizenry. But they also go against the grain of vested interests and deep-seated ultra-conservatism. With few exceptions, there is little indication that the reform process is being well-managed, certainly not in terms of the gap between expectations and delivery. With other words, the jury on the reform process is still out. Moreover, nowhere in the Gulf is the legacy of the 2011 Arab revolts potentially more potent than in Saudi Arabia given its size and repressed diversity in terms of popular aspirations. It goes without saying, that what happens in the kingdom would ripple across the Gulf.

The short-term silver lining of events in the Middle East may be developments in Palestine with the reconciliation between Hamas in Gaza and the Palestine Authority in the West Bank as a result of engineering by the UAE and Egypt. It will no doubt bring relief to Gaza which has effectively been blockaded by both Egypt and Israel. The decisive factor however will be the ability of the government to provide jobs and services, the outcome of elections and how Hamas fares in those polls,

For sure, in theory the deal removes a major obstacle to peace talks: the division among the Palestinians themselves. Yet, fact of the matter is, even if a peace can be negotiated, it may not be worth the paper it is written on without Hamas being part of it. The good news is that the United States and Israel have been muted in their response to the reconciliation. Nonetheless, fundamental differences between Hamas and the Palestine Authority have not been resolved, including the terms of any peace talks and a unified military command.

The bottom line of all of this is that short-term, opportunistic policies will not provide solutions unless they lead to a tackling of fundamental problems. Without that, they could exacerbate situations, meaning that ultimately the threats and problems mushroom rather than shrink. If that happens, Israel’s alliance with Gulf could shift from an asset to a liability.

The above article is based on remarks at United Hebrew Congregation, Singapore, 3 October 2017

Brazilian soccer great Pelé turns 80 on Friday, but the celebration will have to wait. Pelé is Brazil’s all-time leading