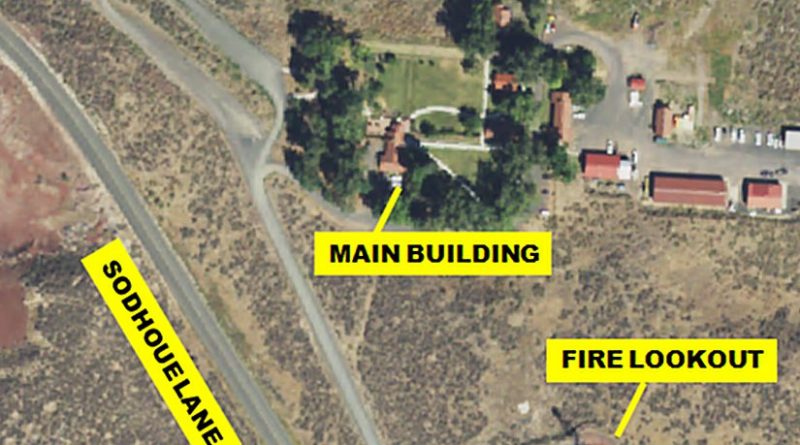 This USGS satellite image of the MNWR headquarters complex is labeled to show key locations referenced in news reports of the militia occupation. Source: Wikipedia Commons.

As the federal authorities gear up to confront the armed militia occupying an Oregon nature preserve, the following article examines the simmering conflict between the ranchers and the federal government over public land use, which lies beneath the current crisis.

On Saturday evening, a group of militiamen took over the management building at the Malheur National Wildlife Refuge, about 30 miles (48 km) south of Burns, Oregon. They are calling themselves “Citizens for Constitutional Freedom,” and argue they are standing up against government abuse of ranchers everywhere. The group is led by Ammon Bundy, whose father Cliven successfully defied the Bureau of Land Management in a 2014 grazing rights dispute.

Much of the United States west of the Mississippi river is outright owned by the federal government, and administered by the Bureau of Land Management (BLM). Until the 1970s, the land was often open to farmers and especially ranchers, who counted on grazing rights to maintain large herds of cattle. Laws adopted in 1976 led to the government closing off much of the land, prompting a backlash in the states dubbed the “Sagebrush rebellion.” It fizzled after the election of President Ronald Reagan, however, as the new administration failed to revoke the laws but promised the BLM would be more sensitive to local concerns.

Since then, Washington has steadily cracked down on private use of public lands, with environmentalist groups pushing for designating much of the government-owned property as protected wilderness.

This has led to many ranchers abandoning their family business. About half the workforce of Harney County, where Burns is located, is now employed with the government in some capacity. One of the few ranching families that have held on are the Hammonds, whose conflict with the BLM helped spark the latest conflagration.

One of the reasons cited by the militia for their occupation of the wildlife refuge was a court order demanding that two members of the Hammond family report to federal prison in California for lengthy jail sentences. Dwight Hammond, 73 and his son Steven, 46, were convicted in 2012 over two fires that affected a combined area of 140 acres of BLM-owned land.

The two fires, in 2001 and 2006 respectively, were deliberately started on the Hammond property in an effort to clear the juniper and sagebrush and prevent the spread of forest fires from government land, the ranchers said. The government charged the Hammonds with arson on federal lands, however, an offense that carries a mandatory minimum sentence of five years in prison under the Antiterrorism and Effective Death Penalty Act of 1996.

As part of a plea bargain with the government, the Hammonds admitted to starting the fire and agreed to give the BLM the right of first refusal on their ranch. Judge Michael Hogan rejected the five-year sentence, calling it “grossly disproportionate” to the crime. Dwight served three months in prison while Steven was released after 11 months. Anything more than that would “shock his conscience,” Judge Hogan said.

The government decided to appeal the sentence. Last year, District Chief Judge Ann Aiken of the Ninth Circuit Court of Appeals ruled that the Hammonds would have to serve the full sentence. With both men required to turn themselves in by January 4, the armed protesters stepped in.

Armed protesters first assembled in downtown Burns on Saturday afternoon, before setting off for the refuge later in the day. Supporters and militia members sympathetic to the ranchers had come from all over the western US. While Ammon Bundy has attracted the most attention thanks to his family name, several other notable characters are involved in the occupation.

Jon Ritzheimer is a former US Marine from Arizona. Last May, he called for a massive anti-Islam rally outside a Phoenix mosque once attended by the two men who tried to attack a “draw Mohammed” cartoonist competition in Garland, Texas. Event security gunned down the attackers before they could do anything, however. Ritzheimer’s rally drew far fewer than 3,000 people he hoped for.

Blaine Cooper, who can be seen in a video with Ritzheimer asking for more citizens to join the militia and “avoid bloodshed,” was enlisted in the US Marine Corps but never went to boot camp, according to the Washington Post.

Another prominent member of the militia at Malheur is Ryan Payne, an electrician from Montana who had taken part in the 2014 Bundy standoff. According to the Washington Post, Payne had told reporters at the time that he served as an Army Ranger. His records, however, show him serving in military intelligence instead.

Some of the groups critical of the government view Payne with suspicion. Writing at the Oathkeepers website, a novelist by the name of Shorty Dawkins even said that Payne might be a government provocateur, and rejected Bundy’s stand at Malheur as “the wrong action at the wrong time” that “serves no useful purpose.”

Since Bundy and some of his followers are members of the Church of Jesus Christ of Latter-day Saints, commonly known as the Mormons, some reporters have been digging into the possible religious background of their actions.

While the Mormon Church has a long history of resistance to government persecution, in a statement released Monday the church condemned the occupation in no uncertain terms.

“While the disagreement occurring in Oregon about the use of federal lands is not a Church matter, Church leaders strongly condemn the armed seizure of the facility and are deeply troubled by the reports that those who have seized the facility suggest that they are doing so based on scriptural principles. This armed occupation can in no way be justified on a scriptural basis. We are privileged to live in a nation where conflicts with government or private groups can — and should — be settled using peaceful means, according to the laws of the land,” the statement reads.

At a press conference on Monday afternoon, Bundy said that he felt confident the federal authorities would not seek an armed confrontation with the militia. The FBI, which is leading the government response, has declined to comment publicly on what they might do. There are still hopes the standoff may be resolved peacefully.

Meanwhile, Dwight and Steven Hammond have turned themselves in to the authorities in Los Angeles. Their attorney, W. Alan Schroeder, announced he would be asking President Obama for an executive pardon. That would be one way to diffuse the situation.