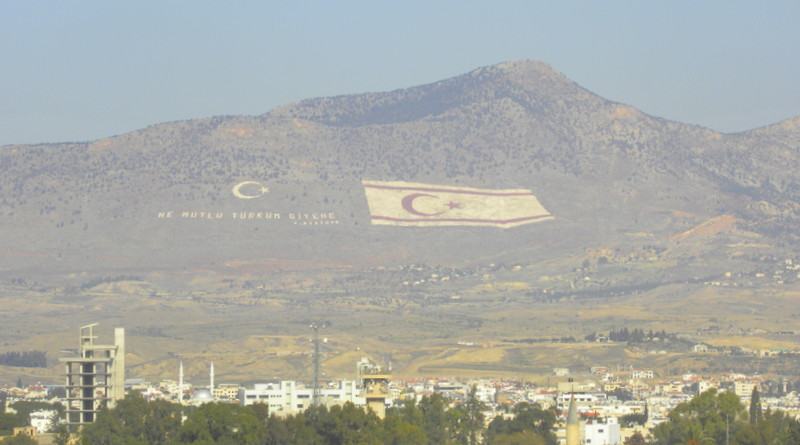 The Turkish flag and the motto of the Republic of Turkey, “How happy is the one who says I am a Turk!” painted in Pentadaktylos/Beşparmak mountains in the occupied area of Cyprus. (Licence: Creative Commons Attribution 2.0 Generic license)

“We always see anti-Turkish rhetoric in election campaigns in Europe. But it is unacceptable to see this happening in Turkish Cypriot politics as well”. “We hear words from Turkish Cypriots even Greek Cypriots cannot dare to say against Turkey”. These are the statements of the Turkish Foreign Minister Mevlut Cavusoglu and spokesperson of the AKP, the ruling party of Turkey, Omer Celik about the interview given by the Turkish Cypriot leader Mustafa Akinci to the Guardian newspaper.

Anybody who knows a little bit of the Cyprus problem and the positions of the Cypriot communities is aware of the fact that using “anti-Turkism” and “Turkish Cypriots” terms in one sentence is not an oxymoron but the shocking reality.

The reason behind it relies on the fact that Turkish Cypriots are a community that is not ethnically Turkish but people of Cyprus who were forced to accept that identity, first under the Ottoman rule due to oppression and later under the British rule as a product of divide and rule policy. Today, despite the fact that they use the Turkish language after the campaigns of Brits inviting teachers from the young Republic of Turkey, Turkish Cypriots protect their Cypriot culture and social values which are totally different from mainland Turks. And these differences trigger the tension in the unwilling and forced marriage between the Turkish Cypriot community and the Turkish State.

Turkish Cypriots are considered as the most unfortunate side in the Cyprus game. After Cyprus got its independence from the United Kingdom, they were left out from their constitutional rights in the Republic of Cyprus by Greek Cypriots. And the never-ending mistakes of the Greek Cypriots and their aim to annex Cyprus with Greece resulted in Turkey’s occupation of the northern parts of the island. This made Greek Cypriots to hold on what they have, a republic which has Turkish and Greek as official languages, a constitution that begins with pointing that Turkish Cypriots equally own the state with Greek Cypriots and the national flag was drawn by a Turkish Cypriot. But the only problem is that today the vast majority of the Turkish Cypriot population lives in the northern occupied area of Cyprus under the Turkish authority and oppression. Basically, while the island got occupied, the biggest loser was the community that nobody cared to ask anything before causing all the trauma. Nor their compatriots or the so-called “motherland”.

The current leader of the Turkish Cypriot community, Mustafa Akinci’s long history of fighting against Turkey’s national policies towards Cyprus made him one of the most hated people in Turkey. But his popularity and support in the Cypriot and international community is undisputable. Despite the small population of Turkish Cypriots, he and his party are not the only ones who share a similar vision and perspective within the community. The “Union of Cypriots” is one of the leading organizations that structured the ideology of Cypriotism and blends it with the unitary Cypriot state objective. They are left-wing nationalists and progressives who believe that dividing this small island nation to zones and communities is the very plan of the imperialists. The organization’s president Oz Karahan was an MEP (Member of the European Parliament) candidate in 2019 and also writes in another important anti-Turkey figure’s newspaper, Şener Levent’s “Afrika”.

Unlike the Union of Cypriots that believes in a short cut way for liberation with by advocating unitarism -the current system of the Republic of Cyprus-, many other Turkish Cypriot political parties and NGOs believe in a “bizonal bicommunal federal” republic. Even though this idea is less realistic as well as less popular within Greek Cypriots, it is also the solution that the United Nations support.

In 2004, a referendum took place on the island for a united federal Cyprus and got rejected by Greek Cypriots while it was accepted by Turkish Cypriots. After this incident, the international community, including the European Union, started pouring money to the Turkish Cypriot community. And it is mostly an unwritten rule that as a civil society organization who wants to get funding for your activities for a united Cyprus, you have to advocate for the infamous bizonal bicommunal federation (BBF). This created an enormous “industry of federalism” and an inflation of ineffective so-called civil society organizations whose life lasts only as long as their projects are financed. Nevertheless, these are the places where young Turkish Cypriots got paid since they were not able to get “governmental” jobs in the occupied area because of their Cypriot origin.

It is important to underline that until a few years ago these federalist organizations were tolerated by Turkey because they were originally supporting the BBF, which was a Turkish solution thesis for Cyprus, today, they also become a target because of the Turkish President Recep Tayyip Erdogan’s Neo-Ottomanist dreams.

Now, the Turkish Cypriot society is divided by their beliefs of the way to survive from the bloodless genocide they are facing. Forces like Union of Cypriots, Jasmine Movement, and Afrika newspaper represent the unitarist and Cypriotist front that gains the most sympathy within Greek Cypriots and is getting more and more popular between Turkish Cypriots. The bizonal bicommunal federalist organizations, political parties and individuals gather around the current Turkish Cypriot leader Mustafa Akinci or the Turkish Cypriot MEP Niyazi Kizilyurek. And there is also a small portion of Turkish Cypriots who are normally secularist but collaborate with Turkey’s Islamofascist Erdogan regime for their personal interest, like “trojan horses”. Even though this last group is extremely unpopular within Turkish Cypriots, they are staying alive by the support of illegal Turkish settlers who outnumber Turkish Cypriots by around ten to one in the occupied area of the island.

Anti-Turkism and resistance against Turkey will exist in Cyprus as long as Turkish Cypriots manage to continue existing in their homeland against all the oppression they face from Turkey and their Greek Cypriot compatriots. When we look at the current positions and mindsets of the Cypriot communities, it is obvious that sooner or later, the Greek Cypriots who are enjoying the status-quo for 45 years because of Turkey’s busyness of handling Turkish Cypriots, will be the next target of Turkey. Will Greek Cypriots be able to resist today’s strong Turkey’s actions like how Turkish Cypriots do for almost 46 years? This looks unlikely when we look at the 1974’s weak Turkey’s smooth operation of Attila.

*Monica Gillan is an independent conflict researcher specialized in Eastern and Southern Europe.

Home » What Is Happening In Cyprus: Anti-Turkism Within Turkish Cypriots – OpEd

6 thoughts on “What Is Happening In Cyprus: Anti-Turkism Within Turkish Cypriots – OpEd”