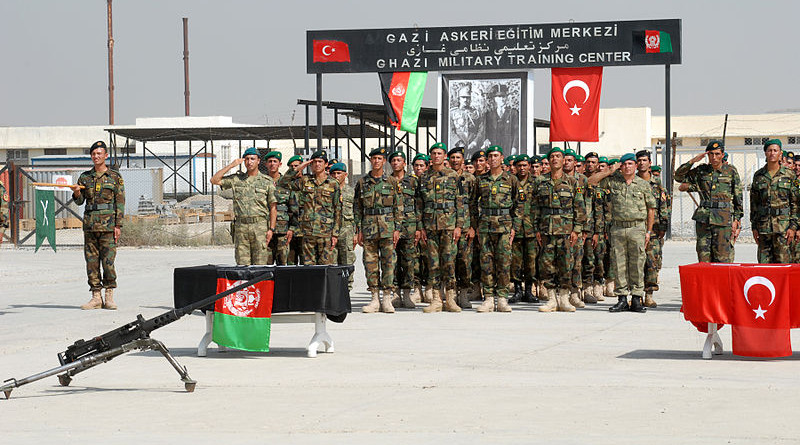 According to the Afghan government figures reported on 4 April 2020, there are now 2704 confirmed cases of  COVID-19 with 85 deaths in Afghanistan. The 40 of these cases are employees and security officers of the Office of the President of Afghanistan and dead of 5 medical staff fighting this pandemic.

While these numbers appear to be very low compared to Turkey, but the country has extremely limited access to testing and the health system has suffered under decades of conflict in the country. There are also fears that the virus could have spread after more than 150,000 Afghans returned from virus-stricken Iran during March, while tens of thousands of others returned from Pakistan.

The dead of 6 people from COVID-19 lying on Kabul streets suggests that many Afghans still do not trust the Afghan health system as they believe the system is not prepared to treat them. Thier view is supported with many reports of lacking testing kits, and patients’ simple caring medicines and medical equipment including insufficient number of PPE for medical staff.

COVID-19 reached Afghanistan when a major  aid event with the potential to change the gloomy outlook of the economy were around the corner. The country’s $11 billion in public expenditure each year is a far cry from its modest revenues, which even after recent improvements barely reach $2.5 billion, officials and analysts say. The difference, about 75 percent of expenses, is footed by grants from international partners, particularly the United States. The pledging conference on Afghanistan set to be held in 2020, as the current year marks the fourth and final year of aid pledged at the Brussels Conference on Afghanistan in 2016. This would help Afghanistan secure pledges from the international community for the next four years. Unfortunately, the outbreak of COVID-19 has shifted all the attention from this event, giving birth to more uncertainties on how Afghanistan is going to this pandemic.

The news of Turkey’s medical aid to more than 57 countries and in particular, the provision of free mask to the citizens of Turkey have created  debate in Afghanistan blaming the government of Afghanistan for not being able to get a share of medical aids Turkey has provided to so many countries while there is a great history of a brotherly relationship between these two nations.

While Turkey itself is ranked world’s 8th hardly hit by the  COVID-19 with its number of  cases rapidly rising to over 126,000 on this day, however, the facts suggests that Turkey not only has the capacity to remain at top of the COVID-19 crises, but also has the resources to help other countries with medical aids and lead by example like no other country in the world.

What is special about the Afghans and Turks relationship

According to the embassy of Turkey in Kabul, the relationship between the people of Turkey and the Afghanistan has a prolonged history. This brotherly relationship is based on the historical and modern time facts. The bond is not limited to one or two spheres only.

The famous poet, scholar, theologian and sufi mystic Mawlana Jelaluddin Belkh-i Rumi in the 13th century (1207-1273) and famous poet, writer and politician, Ali-Shir Nava’i in the 15th century (1441-1501) provided the initial solid basis for start of relationship between the peoples of these two brotherly nations.

The relationship was continuing during the Ottoman era too. Some Ottoman officials were in close contact with Afghan leaders up until early 20th century. An Ottoman administrator, namely Ahmad Jamal Pacha, was sent to Afghanistan to modernizing the Afghan armed forces.

During the Turkish War of Independence and the 1920s, this relationship had been deepened and diversified. The sacrifices of the Afghan nation and the personal friendship of the founders of the two countries, namely Gazi Mustafa Kemal Ataturk and Ghazi Amanullah Khan. Afghan students who were studying at that time in the universities in Damascus, Beirut and Istanbul, joined the armies of the Ataturk, and fought in the Turkish War of Independence. There are narratives that Afghan women sold their jewelry and sent the money to Ataturk.

The government of Turkey’s second ever diplomatic mission abroad were opened in Kabul Afghanistan in 1920 after Baku Azerbaijan. Grateful for the sacrifices of Afghans, the late Ataturk did not reject a militarily support request he received from Amanullah Khan in 1921 even though late Ataturk himself was in dire need of each and every soldier under his command. So, Gazi Ataturk sent the first Turkish military delegation in 1921 to train their Afghan brothers. In the same year, Afghanistan has become the first country to recognize the Government of Ankara, and to sign a political agreement, was known as the Treaty of Alliance. It was also in 1921 when Afghanistan opened its Embassy in Ankara. Gazi Ataturk attended the opening ceremony and raised the Afghan flag to the pole himself. Also, King Gazi Amanullah Khan was the only foreign dignitary to congratulate Ataturk for the signature of the Lausanne Peace Treaty in 1923.

Afghanistan was the second country to recognize the republic of Turkey in 1923, after the Soviet Union. Following the visit of the Afghan Foreign Minister (Mahmoud Tarzi) to Turkey in 1927, Amanullah Khan paid a state visit to Turkey in 1928 as the last leg of a long European tour. Indeed, this was the first state visit by a foreign Head of State to Turkey. During this visit, Turkey signed its first technical assistant agreement with Afghanistan (Friendship and Cooperation Agreement, 25 May 1928).

Turkish military delegations kept coming to Afghanistan till the Second World War. One of those delegations led by Dr. Kamil Rıfkı Urga founded the Kabul Medical University in 1932. The middle section of the Afghan-Iran border was drawn up by a Turkish committee in 1934-35, upon the referral by the two countries.

When Gazi Ataturk passed away in 1938, Afghanistan was the only country that kept its flag half-mast to initiate a week of mourning.

Since 2001, Turkey has also been part of the role of framework nation for Kabul under NATO flag and has been consistently building the capacities of Afghan national defense and security forces. Till now, Turkey has trained more than 12,000 Afghan military and security personnel. Turkey has also been providing development assistance to Afghanistan, mostly in the fields of education, infrastructure and health-care. During this period, Turkey has completed more than 1000 projects valuing more than one billion USD. Indeed, Afghanistan is the biggest recipient of Turkey’s development aid for the last 18 years. The Turkish Cooperation and Development Agency, TİKA has been operating through its three offices in Kabul, Herat and Mazar-ı Sharif, which is a unique case since TİKA does not have more than one office in any other single country.

*Shokrullah Amiri is a private sector development specialist with more than 10 years of work experience. He is currently working as Head of Private Sector Development and Outreach Department at the Administrative Office of the President of Afghanistan (AoP).