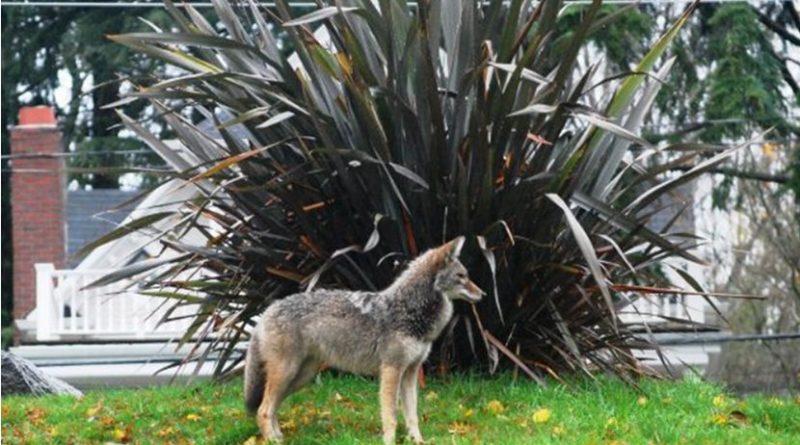 A coyote near homes.

n a world first, researchers at ZSL and UCL compared changes in bird and mammal populations with socio-economic trends in low- and lower-middle income countries over the past 20 years. Their results suggest that national-level economic growth and more gender-balanced governments enhance wildlife populations and provide support for linking the UN’s human development and conservation targets.

In 2015, the 2030 Agenda for Sustainable Development was formally adopted by all United Nations Member States to provide “a shared blueprint for peace and prosperity for people and the planet, now and into the future.” At its core are the 17 Sustainable Development Goals (SDGs) which call for world-wide collaboration to reduce inequality, improve human health and education, promote economic growth, tackle climate change and conserve biodiversity.

This blend of demographic and environmental development is complex, and the SDGs are not the only agenda the international community is working to. Evidence of continuing biodiversity loss has led to a succession of conservation-focussed policies too, chief of which are the Convention on Biological Diversity (CBD) Aichi targets, set for 2020. With potentially competing priorities, the team at ZSL’s Institute of Zoology and UCL’s Centre for Biodiversity and Environment Research, wanted to understand whether progress towards socio-economic targets might limit the likelihood of meeting conservation ones.

To explore these links, researchers cross-referenced data from the Living Planet Index on 298 bird and mammal populations – recorded outside protected reserves – with indicators of social, economic and political progress towards the SDGs in 33 low- and lower-middle income countries obtained from the World Bank. Their analysis, published today in the journal People and Nature, found consistently positive relationships between economic growth and wildlife abundance – so the richer the people, the safer the biodiversity. Similar relationships were found for more gender-equal societies, lower levels of government corruption and longer human lifespans too.

Lead author Judith Ament, PhD researcher at ZSL and UCL, said: “Our study suggests that at a national level, it is possible to work towards conservation and economic development at the same time and underlines the need for further integration of sustainable development strategies. We think this might be because as standards of living rise, people become less dependent on local natural resources for income and food, and environmental regulation becomes tighter. We are concerned that this could lead to more importing however, the impact of which would fall on wildlife elsewhere. This certainly merits further research.”

Researchers also found that denser and faster-growing human populations reduced wildlife numbers and that there is evidence for national-level environmental benefits of urbanisation.

Dr Chris Carbone, Senior Research Fellow in ZSL’s Institute of Zoology, said: “This is consistent with other studies that have shown how humans compete with animals for space and resources and if more people are concentrated in one place, more areas are open to wildlife. It wasn’t all good news though and we did find that aspects of human development had a negative impact on some species. Numbers of water-birds, for example, fell as wider water sanitation and treatment processes were implemented. It’s only by understanding these relationships that we can mitigate them and put forward policies that are good for people and for the natural world. This paper provides the first empirical evidence that simultaneous progress for both international development and conservation is possible and, should further research uphold our findings, could revolutionise UN target setting in the future.”

ZSL’s research was essential to establishing major global monitoring and prioritisation programmes, such as the IUCN Red List and Living Planet Index, as well as setting and evaluating the UN’s biodiversity targets. The next CBD targets, to replace the Aichi targets, will be set at the convention in Beijing, October 2020, where ZSL data on global biodiversity trends will again be key.