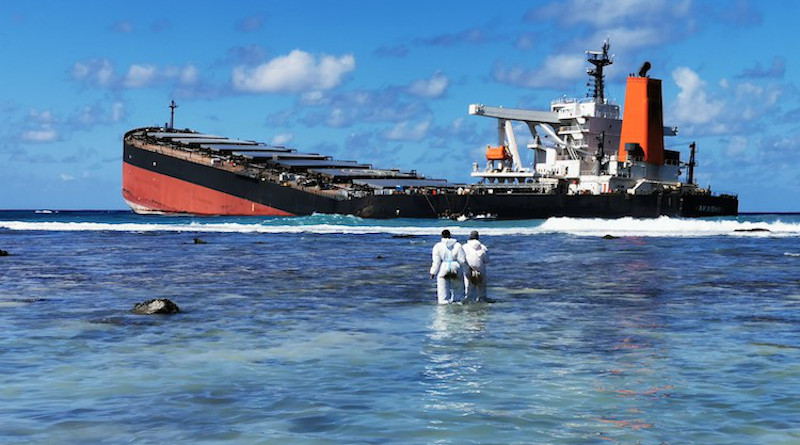 By Christian Bueger and Timothy Edmunds

At the end of July 2020, the Japanese-owned bulk carrier MV Wakashio got stranded on coral reef off the Mauritian coast. By 10 August, around 1,000 tonnes of fuel had spilled from the ship, threatening the Blue Bay marine park, one of the marine treasures of Mauritius and a sensitive ecology site.

The oil spill is an environmental catastrophe for Mauritius, with Greenpeace Africa warning that thousands of animal species were “at risk of drowning in a sea of pollution, with dire consequences for Mauritius’ economy, food security and health.”

This catastrophe demonstrates the importance of maritime security and disaster response capacities in the Indian Ocean region – home to one of the busiest waterways in the world. It should also alert us to how weak the response mechanisms in the region are, despite millions being spent on capacity building.

The MV Wakashio got stranded on the Mauritian shore on 25 July 2020. Two weeks later, on 7 August, a plan to re-float the vessel and pump out its 4,000 tonnes of diesel and oil failed, leading to an oil spill.

What at first appeared to be a containable emergency quickly outstripped the Mauritian government’s capacity to cope. On 10 August, Prime Minister Pravind Jugnauth declared a state of environmental emergency and appealed for international assistance.

Hundreds of ordinary Mauritians scrambled to improvise barriers from straw stuffed sacks and other materials in an effort to contain the spill. The French navy sent a reconnaissance plane and the Champlain, an overseas support and assistance vessel, from nearby La Reunion. India sent experts, as did Japan and the International Maritime Organisation (IMO). The United Nations organisations resident in Mauritius offered assistance, as did other donor entities, such as the European Union.

As a result of these efforts, only around a quarter of the toxic fuel on the vessel leaked. Although this was enough to cause an environmental catastrophe, the worst-case scenario of the vessel breaking up and releasing all of its fuel was avoided.

The Mauritian authorities knew about the risk of such a disaster. Indeed, it was not the first time that a ship got stranded at this location, which is only a few miles from where thousands of ships pass by on their voyage between Asia and the Cape of Good Hope.

Mauritius has a National Oil Spill Contingency plan in place, drafted with the help of the IMO and the UN Environmental Programme. The country has also been the beneficiary of several large-scale capacity building projects that aimed to develop a regional oil spill response and advance national preparedness for environmental disasters at sea.

These include a US$ 4.9 million project called Western Indian Ocean Island Oil Spill Contingency Planning which ran between 1998 and 2006. It aimed to build appropriate national and regional oil response capacities in Comoros, Seychelles, Madagascar and Mauritius, and highlighted that the Indian Ocean Islands were at risk of a spill occurring and causing an environmental disaster.

While this project mainly addressed national level responses, its successor project was more ambitious. The US$ 26.7 million Western Indian Ocean Marine Highway Development and Coastal and Marine Contamination Prevention project ran from 2007-2012 with the goal of developing and implementing a regional strategy. Kenya, Tanzania and South Africa were included in the project.

Capacity building work continued under the auspices of the UNEP’s Regional Seas Programme and the Nairobi Convention. Only a few months ago, the programme held a workshop on oil spill prevention where Mauritius gave an update on its national preparedness status. Today we know that all of the capacity building efforts and the national planning were insufficient to enable the country to cope with a disaster of such scale.

Three large scale capacity building projects are currently underway in the region. These address maritime security from different angles. Tackling Somali piracy and other forms of blue crime have been the core drivers, but also concerns over the conservation of the ocean. None of the centres and agreements set up in these projects, played any significant role in the disaster response.

The Djibouti Code of Conduct is a regional maritime security cooperation agreement initiated by the IMO in 2008. Initially focused on piracy, it was extended to cover environmental issues, amongst others, in 2017.  Its programme implementation unit was established in 2010 with a budget of US$ 13.8 million. The IMO budget for technical cooperation and capacity building was US$ 13 million in 2018-19 alone.

A second major initiative is the MASE project funded by the European Union. Its main goal is to enable states in the region to develop an accurate picture of the maritime domain and to develop coordinated rapid responses. Between 2013 and 2020 more than US$ 30 million was spent here.

The third pillar is under the Nairobi Convention, a major focus of which is the prevention of pollution and oil spills. Its sea programme is called SAPPHIRE and has a budget of US$ 8.8 million for 2016-22. Unfortunately, it appears that none of these expensive endeavours were capable to respond in any substantive manner to the Mauritian disaster.

It does not require too much imagination to envisage how these mechanisms could have worked. The MV Wakashio was on a collision course that clearly deviated from the routes that transit traffic usually takes and hence, it could have been detected. Having seen that the Mauritius coast guard did not react, the Regional Maritime Information Fusion Center in Madagascar could have issued an instant alert. This implies that the grounding could have been avoided.

The procedures established under the Djibouti Code, Nairobi Convention or the regional cooperation agreements could also have played major roles once the ship ran aground, including assisting with risk assessment during the early days of the crisis.

Mauritius could have used these mechanisms to call for assistance from the region, whether that is regional experts, or additional containment equipment. None of this happened. Why?

In Mauritius’s case, significant efforts had been made to prepare for an oil spill emergency under the programmes above and on paper sufficient capacities and contingency plans appear to have been in place. What seems to have caught everybody by surprise was how swiftly an apparently containable incident escalated into a full scale environmental emergency.

Further investigations will provide details of where, when, and how mistakes were made, including by the Mauritian government, the MV Wakashio’s owners and the industry experts that were brought in to respond. However, the disaster also points to some of the difficulties of capacity building more generally, despite the millions spent on it. As we show in a forthcoming book, capacity building programmes can be short lived and technical in nature, with an emphasis on outside expertise and consultants.

Key questions to ask include:

a) Why was the escalatory potential of the disaster apparently missed? Were the right people in the right roles at the right time, and were their voices heard by decision makers?

b) Did the right training go to the right people? An earlier report by World Bank on the Oil Spill Contingency Programme suggested that “[participating] countries sometimes nominated high-level officials rather than front-line staff for training.”

c) Had sufficient stockpiles of oil spill containment equipment been maintained by the Mauritian National Coast Guard and Special Mobile Force? Concerns had earlier been raised about appropriate storage facilities for this equipment, but these were thought to have been resolved.

d) How effectively were oil spill capacities and training sustained over time? Programmes may be judged successful at the time, but often face sustainability problems and their longer-term impact can be less clear.

Critically, regional maritime security mechanisms appear to have been largely absent during the emergency. One reason for this may be that there are simply too many projects, organisations and platforms that deal in one way or the other with maritime security in the region.

Above we have introduced three of them, but as we show in a research project as part of the SafeSeas network on maritime security, these are only a few samples of the various initiatives under way in the region. Fragmentation and the resulting problems of overlap and coordination can cause problems of action and commitment. The question of which organisation should act, when and how, and who if anybody should lead a regional response all remain pressing.

These kinds of problems are not easily addressed, not least since the region is far from a collective identity or a joint regional plan. Yet, countries such as India, Kenya, or France have the power to steer the region into more organised waters. Forums such as the Indian Ocean Rim Association or the Indian Ocean Naval Symposium could provide the platform for that discussion.

Will regional maritime security ever succeed?

The fact that none of the regional mechanisms was capable to respond to the oil spill, and that Mauritius did not consider turning to them casts doubt on their effectiveness. Capacity building failures and fragmentation will not be easily addressed.

Regional powers, such as India and France responded rapidly to the incident and provided assistance. Their contribution will be needed for a long time to come, not just to cope with environmental disasters but also piracy and other forms of blue crime. There is an urgent need to tailor capacity building for the long term, in ways that recognise local country circumstances, constraints and priorities, and that can develop sustainable solutions over time.