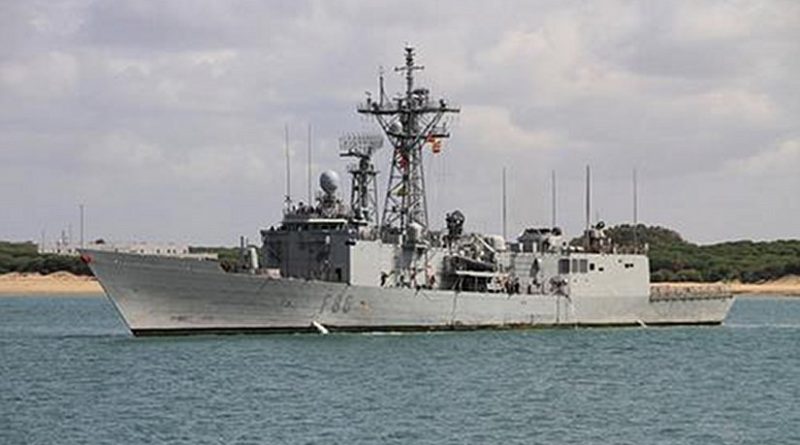 The Spanish Navy frigate “Canarias”, currently deployed on the European Union EUNAVFOR SOPHIA mission, rescued 286 people trying to reach Europe on board a wooden vessel of only 15 meters in length.

In the early hours of December 3, the frigate “Canarias” received a call from the Maritime Rescue Centre in Rome reporting the reception of a mayday call referring to a vessel fully laden with people that was adrift. Shortly afterwards, the European command of the operation also reported another vessel with a large number of migrants on board. This situation was repeated up to a total of seven times.

The “Canarias” dispatched its two inflatable boats and began to help the migrants. In a little over three hours, all the migrants – from various countries, including Somalia, Eritrea, Ethiopia, Morocco, Libya, Mauritania, Yemen and Mali – were rescued.

Following this operation, the evidence team from the “Canarias” boarded the vessel to collect evidence and subsequently sank the boat after deciding it was no longer fit for service. The lower deck was almost entirely flooded and it was a hazard to other boats in the area. Sinking this boat also contributes to weakening the business model adopted by people traffickers as it denies them the opportunity to reuse it in the future.

By collecting evidence, the servicemen who comprise Operation SOPHIA gain more precise knowledge of the modus operandi adopted by the mafias engaged in people trafficking on boats that are poorly equipped to deal with the harsh weather conditions that can be experienced in the Mediterranean.

This action brings the total number of people rescued by the “Canarias” in the Mediterranean since it joined Operation SOPHIA on October 5 to 915.