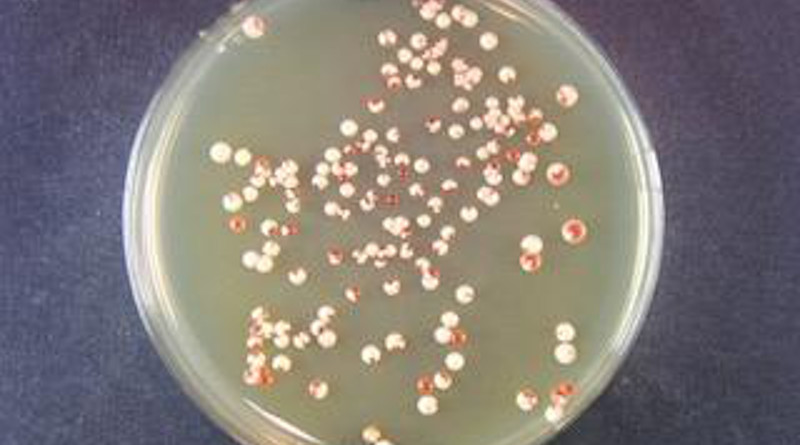 Yeast colonies with the prion in a shape with a larger nucleation seed (white) than can be cured (red). CREDIT: UMass Amherst/Serio lab

A molecular biologist at the University of Massachusetts Amherst who has for decades studied the nightmarish group of fatal diseases caused by prions – chronic wasting disease in deer, mad cow in cattle and its human analog – credits a middle-of-the-night dream for a crucial insight, a breakthrough she hopes could lead to a cure.

In a new paper in Nature Structural and Molecular Biology by Tricia Serio, dean of the College of Natural Sciences and professor of biochemistry and molecular biology at UMass Amherst, and others, report an unanticipated role for prion nucleation seeds that enhances their ability to appear and resist curing. Nucleation seeds are molecule clusters that form when prions attach to one another and change shape. “Once that change occurs, it creates a very stable aggregate known as amyloid that was thought to be impossible to inactivate by normal means,” Serio notes.

The infectious prion is an unusual pathogen, a protein without nucleic acid, she explains. Prion diseases were first described in the 1800s, and include scrapie in sheep and other neurodegenerative diseases such as mad cow disease and in humans, Creutzfeldt-Jakob disease, fatal familial insomnia and kuru from ritual cannibalism in Papua, New Guinea.

Serio says, “These diseases are always fatal,” but she and colleagues including first author Janice Villali work with natural yeast prions that can’t be transmitted to humans or cause disease. “It’s a good model system that is not infectious, and it grows really fast.”

It has been known for decades that prion protein (PrP) misfolding is a key part of the disease process, she adds. In these diseases, proteins fold into 3D shapes that cause disease. In mammals, the protein quality control system responds to folding mistakes with “chaperone” molecules that seek out misfolds and try to refold and correct mistakes.

But prions misfold so quickly that chaperones can’t keep up, Serio says. “That part was known,” she adds, but scientists still could not figure out what was limiting the chaperone system, allowing prions to persist. “One key factor controlling the transition from harmless protein to invincible disease menace was so hidden and obscure that it had not been previously proposed,” she says.

Then, after a conference where she had talked intensely all day about prions, Serio had the crucial dream. “It came to me that the size of the aggregate nucleation seed mattered,” she recalls. “So we went back and designed experiments to test the minimum size idea by mathematical modeling with co-first author Jason Dark, and it worked. That led to this investigation and why we’re really excited about this paper.”

The first revelation was a surprise, Serio recalls – prion aggregates come in different sizes. “Everybody knew of the nucleation seed, but no one knew they could be different sizes for the same protein.” As prion proteins physically attach and the complex switches from one state to another, this minimum size is really important – but why?

It turns out, Serio says, that the seed complex must double in size for the disease to persist. It it starts with four molecules, it must reach eight. “This minimum size determines whether the chaperone can win. Four has to get to eight, but if you catch it early enough, if you pull out one side of the square, the amyloid structure can’t double. Chaperones prevent the disease by preventing it from doubling in that first round.”

Another discovery is that if the minimum nucleation seed starting size is 10 and it must reach 20 to create two amyloids, that complex is an easier problem for chaperones to nip, Serio points out. “In yeast, the bigger the initial seed, the more difficult it is for the disease to resist chaperones and take hold because these protein quality controls have more time to act; the smaller seed is harder to cure because it doubles more quickly.”

She adds, “We realized that if we could control this transformation, we could stop the disease from arising, but we also realized that the same barrier would control going backwards and unfolding an established amyloid. The literature says that’s a silly idea because prions survive and resist killing so well. But once we figured out this minimum size, we showed that it could also predict the frequency of prion curing under different growth conditions. Looking back, we can’t figure out how we missed it.”

Serio says she and her team now know there are at least three nucleation sizes possible, and, “I suspect that it will turn out to be an infinite number,” she adds. “In fact, we have shown that we can shift the nucleation size by changing the shape of the prion or by expressing a mutant form of the protein, opening the door to therapeutic intervention to reverse this process.”

A Year In Kazakhstan: Some Observations – OpEd

As the world comes to terms with the coronavirus effect, I’ve been sitting at home, juggling my time between conducting

Bioplastics No Safer Than Other Plastics