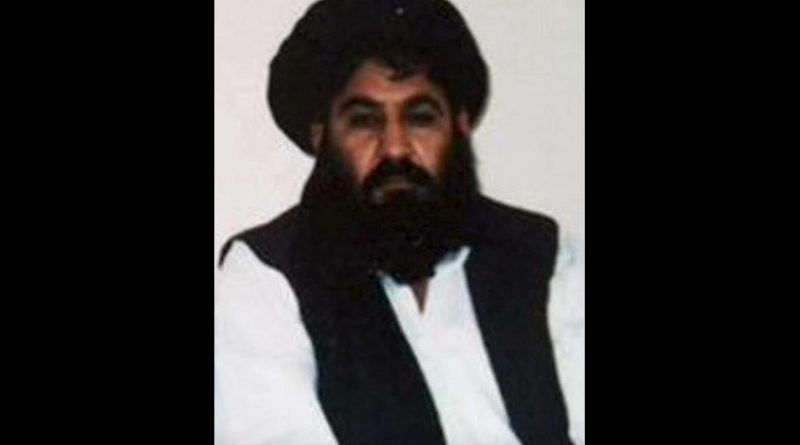 Leader of the Taliban, Mullah Akhtar Mansoor, as seen in this undated handout photograph by the Taliban. Source: Wikipedia Commons.

The constant efforts for an enduring peace in Afghanistan essential for the long term and plausible peace for the people has always been a collective effort of the Afghan government and the international community. The chaos and the conflict in Afghanistan has tried to be overcome through a political process by engaging the Afghan Taliban and the government in a series of negotiations. Previously, the regional powers as well as the United States backed the peace talks with the Afghan Taliban However, with the sudden revelation of Mullah Omar’s death, the over-delayed peace process between the two parties once again have fuelled the persistent tension in the country and encouraged other militant groups to make their place.

Pakistan had mediated a few rounds of peace talks, but after the Mullah Omar’s death the peace talks were halted.

Through a mediatory role Pakistan twice endeavored to engage the Afghan government and the Taliban in a process of peace talks. Further supported by China and the US, both parties were urged to reach at a consensus about a ceasefire and eventually engage in the confidence building measures (CBMs). However, the recent news of the killing of the Afghan Taliban’s supreme leader has once again put the goal of bringing peace in Afghanistan on the stakes. Under the leadership of Mullah Mansoor, the peace talks between the two parties were obscure, but yet there was a ray of hope that could move forward. The demands of Mullah Mansoor for a complete withdrawal of foreign troops from Afghanistan was considered as an obstruction point since the US and its allies could not agree to a complete withdrawal of the ISAF forces therefore, the drag-on policy was never allowed toward a successful peace process for Afghanistan.

Many pretend that the death of Mullah Mansoor may lead to temporary gains such as a division amongs different groups of the Taliban. However, the selection of Mullah Haibatullah and his declaration about following his predecessor’s policies may seem difficult for bringing-up an option where the two sides find a face-saving option. Mullah Haibatullah was former chief justice and head of Ulema Council of Taliban, therefore, his word and fatwa is largely acknowledged — yet many still believe that his attitude unlike to Mullah Akhter Mansoor is amenable with the possibility to join the peace process to bring an end to the Afghan civil war.

The regional countries’ role always holds a significant position while mediating the peace talks of Afghanistan. Since Pakistan has already played the mediator’s role, therefore at the recent meeting of Afghan Ambassador Dr. Hazrat Omar Zakhilwal with Prime Minister Nawaz Sharif’s aide Sartaj Aziz in Islamabad the main focus remained about the prospects of the Afghan peace process after the death of Taliban leader Mullah Akhtar Mansour and the assumption of leadership by Mullah Haibatullah.

Nevertheless, Pakistan considers the killing of Mullah Mansoor a major reason that scuttled the peace efforts particularly at the time when all the parties, along with China and the US, have further added to the complexities of the Afghan conflict and only undermines the peace process. The implications are already manifold and the killing of Mullah Akhter Mansoor badly affects the efforts of those seeking a possible political solution essential to ending the enduring turmoil in the war-torn country. All the regional countries and the US advocate a politically negotiated settlement as most viable option that could compel the two sides to move forward on the issue of Afghan peace and stability.