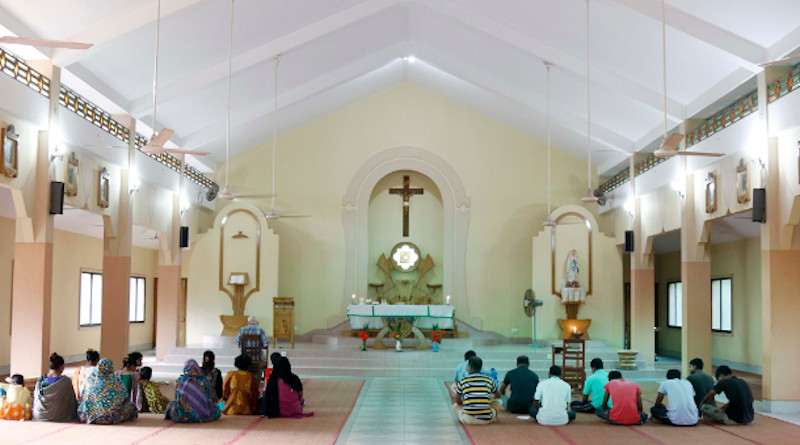 “I always take pride in calling myself a Dalit,” declares Atul Francis Sarker, a Catholic and executive director of Caritas Bangladesh, the Church’s social service agency and one of the country’s largest charities.

His journey from the marginalized and discriminated Dalit group to climbing to the top position of Caritas is a story of defying odds with resilience and dedication.

“I owe this much to missionaries and the Church’s comprehensive development approach for all people,” Sarker, a 62-year-old father of two, told UCA News.

Originally one of the faithful at St. Xavier’s Catholic Church in Baradal in Satkhira district, covered by Khulna Diocese, Sarker is based in Dhaka and visits his village home occasionally.

Most of the parish’s more than 3,200 Catholics are former Dalits.Dalits are excluded from the four-tier Hindu caste system and are discriminated against as “untouchables” by caste Hindus.

They are denied social mixing including gatherings and marriage, entry to schools, restaurants, markets and temples, and so on.

“I remember people refused to buy milk from me in the market. Once I touched the earthen pot of a woman mistakenly while collecting water from the pond, so it was smashed. I was surprised and only realized how humiliating it was when I grew up,” said the former seminarian.

Catholic missionaries have played a vital role in transforming the lives of thousands of Dalits, Christians and non-Christians alike, he noted.

“They emphasized social values such as accepting people as they are and how to diminish social stigma. Their priority on education, development and empowerment has turned the tables for Dalits,” he said.

Shyamuyel Mondol, 26, is a Catholic and social worker from Mary, Queen of the Poor Catholic Church in Chuknagar of Khulna district. It has 300 Dalit Catholics.

Since the late 1970s, the church has been a base for missionaries from the Society of St. Francis Xavier for Foreign Missions (Xaverians) serving Dalit-majority areas in Satkhira, Khulna and Jessore districts.

“They believed that without changing faith freedom was not possible. With the support of the Church, many of them got an education, found respectable jobs and live with dignity,” Mondol told UCA News.

Mondol’s Catholic mother married a Hindu man who later became a Christian. Despite endemic poverty, the couple offered education to seven children with support from the Church.

Mondol entered a seminary to become a missionary priest but left after graduating in 2018. During his schooling and religious formation, he gained English language and computer skills that proved to be vital resources for his future life.

“Who I am today or I can become in the future could not be possible if my parents didn’t convert. Christian values and church support changed our lives forever,” he added.

The story of Swapon Das, executive director of Dalit, a social organization in Satkhira district, is slightly different.

Das, 57, became a Catholic in 1985 after working with Xaverian Father Pierluigi Lupi on various socioeconomic projects for Dalits for two years.

“Father Lupi was angry when I first appealed to become a Christian and told me to stick to my religion. He agreed after several requests,” Das told UCA News.

He is the only family member who changed faith and, even after he entered a seminary to become a priest, his Hindu mother vehemently resisted.

“She wrote to me: ‘I have accepted your conversion to Christianity but I will commit suicide if you become a priest.’ So I left,” he recalled.

After becoming Christian, most Dalits abandoned old professions and became farmhands, fishermen, fish farm workers and daily wagers. Those who got a better education even became doctors and engineers.With the increase in literacy and social awareness, malpractices such as the dowry system and child marriages have dropped.

“We have been promoting education and vocational training such as handicrafts and computer training because many Dalits, especially Hindus, are still poor and discriminated against,” he added.

There are about 3.5 million Dalits in rural and urban Bangladesh, according to Banglapedia, the national encyclopedia. The southern coastal region is home to about 500,000 Dalits, activists say.

Starting from the 17th century, Catholic missionary groups — Jesuits, PIME and Salesians — had activities among Dalits in areas now covered by southern Khulna Diocese, with both success and failure, according to Xaverian Father Sergio Targa, a researcher and social activist.

Dalits, driven by a need for “security and protection” from social oppression, offered the only front for evangelization as caste Hindus and Muslims were skeptical of Christianity.

The relation between Dalits and early missionaries was topsy-turvy for various reasons including lack of support from church authorities, inadequate human resources and rigidity on both sides, the priest noted.

Dalits moved back and forth between Catholicism and Hinduism over issues like unlawful marriage, power struggles between priests and village leaders, and constant quarrels among villagers.

Xaverian missionaries termed the Dalits “Rishi” (wise or sage) to dignify their professions and started their Rishi Mission in 1952. They shifted priority from conversion to social development.

Xaverians faced also face challenges as non-Rishi Christians didn’t want to mix with Rishi converts. For example, two buildings for liturgy for two groups existed in a parish until a Xaverian priest pulled one down in 1959.

“Rishi people became Christian mainly to have dignity and to get services from the Church. They believed their traditional faith would not allow them freedom from untouchability,” Xaverian Father Luigi Paggi, who worked among Rishis for 25 years, told UCA News.

Today, about half of Khulna Diocese’s Catholics are Dalits and three parishes — Satkhira, Shimulia and Baradal — are entirely comprised of Dalit Catholics. There are also some priests from Rishi families.

Father Paggi lamented that Rishi people should have prospered even more. “Those who prospered in life could support the community better. There is a lack of unity and motivation as if they are in a slumber,” the priest said.

Daud Jibon Das, 44, secretary of the Justice and Peace Commission in Khulna Diocese, credited Christianity with changing the lives of Dalits.

“Christianity played a revolutionary role in my village [in Satkhira] as education and better livelihoods improved the lives of people. All children go to school, which was unthinkable one day,” Das, regional director of Caritas Khulna, told UCA News.

Das, a Dalit himself, noted that many Dalits still need support as they don’t have land apart from their ancestral home and lack better livelihoods to have a decent life.

“We are trying to help those still in need. We are grateful to the missionaries for helping improve our lives and we keep in mind their lesson that we must not forget our community no matter what,” he added.