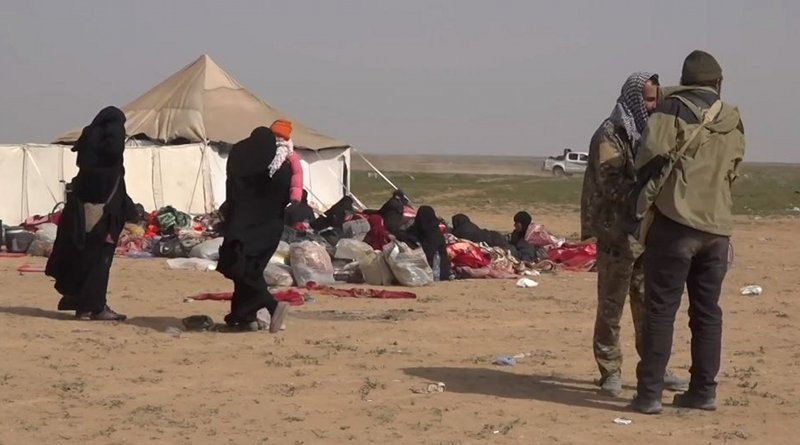 Tens of thousands of Syrians, many connected to the Islamic State terror group, could soon be free under a plan to start clearing out the overcrowded al-Hol displaced persons camp in northeast Syria.

Officials with the Kurdish-led Syrian Democratic Council, the political arm of the U.S.-backed Syrian Democratic Forces (SDF), and Autonomous Administration for North and East Syria (AANES) have for months been clamoring for help to care for the women and children who packed al-Hol and similar camps following the collapse IS’ self-declared caliphate in Syria in March 2019.

Now, they say the situation in al-Hol, in particular, is no longer sustainable.

“We aim to release all Syrians held in Hol – first, all those from North and East Syria,” Arin Sheikhmous, an official with the Kurdish administration responsible for refugees and camps, said Monday in a statement shared by the Rojava Information Center, a pro-Kurdish research organization.

“For those from regime and Turkish-controlled regions, we are still discussing the mechanism, but we aim to find guarantors and release these people, too,” Sheikhmous said. “For the Iraqis, our aim is to return them home, but the Iraqi government is dragging out the process.”

He did not give a timeline of when the detainees will be released.

Al-Hol, which at times has been home to more than 70,000 people, currently houses at least 64,000 displaced persons, according to the U.N. Office for the Coordination of Humanitarian Affairs (OCHA).

“Hol Camp is a heavy burden on the shoulders of the AANES,” said SDC Executive Committee President Ilham Ahmed in a statement last Saturday.

“The AANES is not obliged to pay exorbitant sums in order to provide these people with food and other things, let alone [deal with] the problems that arise daily including assassinations, rape, and so on,” Ahmed added.

Kurdish officials have been getting some support from the international community and from aid groups that have worked in the camps.

The United States has also helped, using some of its $200 million anti-IS budget for fiscal 2020 to help secure detention camps and prisons in the region. In April, the U.S. also sent $1.2 million worth of medical supplies to help prevent a potential coronavirus outbreak in the camps.

But security for the camps has fallen largely to the SDF, which has also been asked to continue targeting IS cells still entrenched in the region.

U.S. officials have warned the situation is not sustainable.

“It’s not a good place to live,” the commander of U.S. Central Command, Gen. Kenneth “Frank” McKenzie, told an online forum this past August.

U.S. intelligence estimates have also described al-Hol as a “relatively permissive environment” for IS supporters, noting that the terror group has used the camps to recruit followers.

It is not clear whether the AANES or SDC consulted with U.S. officials before making the decision to release all Syrian nationals from al-Hol.

The U.S. State Department did not have any information to share when contacted Monday by VOA, and the Pentagon and the U.S.-led coalition have not yet responded to requests for comment.

In her statement Saturday, Ahmed said officials have requested the SDC’s legislative council “issue a general amnesty” to many of the Syrians slated to be released, provided they have not committed any major crimes.

A United Nations official also said there would likely be some additional security precautions.

“It is the U.N.’s present understanding that announcement is part of the ongoing gradual departure of Syrian IDP families to areas of origin under tribal sponsorship arrangements,” U.N. OCHA spokesperson Danielle Moylan told VOA.

Moylan said more than 2,000 Syrians have been released so far this year, including a group of just more than 200 late last month, under tribal sponsorships, part of an effort dating back to 2019.

But officials say more is needed, not just to address the displaced Syrians and Iraqis, but the estimated 10,000 foreigners, as well.

“Durable solutions for all of the current 64,000 residents at al-Hol – whether Syrian, Iraqi, or from another country – are needed for people living at al-Hol,” Moylan said.  “Any departures must be voluntary, safe, fully informed and dignified.”

The U.S. has been pressing for Western countries, especially, to repatriate any citizens who left to join IS in Syria, though many have been reluctant to do so.

Last week, the U.S. announced it had repatriated a total of 27 Americans from SDF custody in Syria, 10 of whom have been charged with various crimes because of their support of IS.

Home » Islamic State Families To Be Cleared From Al-Hol Camp