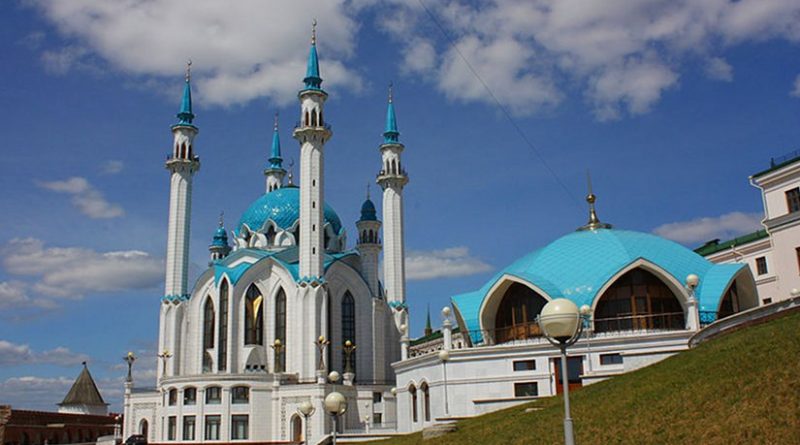 Qolşärif Mosque in Kazan, belonging to Hanafite version of Sunni Islam is one of the largest mosques in Russia. Photo by Gontzal86, Wikipedia Commons.

The Russian authorities do not understand that the Muslim Spiritual Directorates (MSDs) they have created not only are not part of the Islamic tradition but are completely incapable of reaching the new generation of Muslims in the Russian Federation or of interacting usefully with Muslims abroad, according to Ruslan Kurbanov.

Kurbanov, a senior researcher at Moscow’s Institute of Oriental Studies, says that “Russian bureaucrats, who are accustomed to the idea that society doesn’t decide anything ignore the interests of the Muslim community even more than they do other groups” (onkavkaz.com/posts/105-moskva-i-mudzhtahidy-mira-situacija-kriticheskaja.html).

That may have worked in Soviet times, but “over the course of the post-Soviet years, a new generation of educated Muslim youth has grown up which has its own independent opinions and positions relative to key events in the country and in the world arena,” opinions that reflect its close links with Muslim communities and Muslim scholars abroad.

That means, Kurbanov continues, “this educated Muslim youth of Russia at one and the same time alongside its Russian citizenship and identity is already an inalienable part of the global 1.5 billion-strong Muslim war.” That is something Russian officials must understand and act accordingly.

“Attempts to drive this independent thinking youth under the propaganda of Russian television just like attempts to drive it into a vertical of MSDs, on the example of the vertical of the Russian Orthodox Church are condemned to failure in advance,” he argues. Officials must recognize that the way Muslim groups are run is very different from the way Christian ones are.

“Muslims have never had a single vertical of administration or a single center for the adoption of decisions of a kind like the Orthodox patriarchate or the Catholic papal throne.” But more than that, the centers where decisions are made for Muslims in Russia are beyond the borders of Russia.

As Kurbanov points out, “historically inside Islam has been formed an absolutely different structure of administration of the community of believers,” one that takes the form of “a numerous corporation of scholarly theologians, fahids, and mujtahids.” They and not any patriarch or pope make the key decisions.

The most important of these groups today and the one Russia should reach out to but hasn’t is the World Union of Muslim Scholars. The reason Moscow hasn’t is that the group frequently takes independent positions the Russian government doesn’t like, and instead of interacting, Moscow has isolated itself.

One of the leaders of the World Union, Sheikh Ali al-Karadahi hs even proposed creating a Russian council which “would develop norms of Muslim law” appropriate for “the specific conditions of the life of Russia’s Muslims.” Such groups have existed in other countries for decades, but Russia has refused al-Karadahi’s offer.

Unless Russia acquires its own major Muslim scholars and unless they enter into active dialogue with Muslim scholars abroad, the dialogue between Moscow and its own Muslims will be a dialogue of the deaf. And that will be an increasing tragedy for the Russian government and for Russia’s Muslims, Kurbanova says.

As Russia becomes ever more deeply involved in the conflicti n Syria, “which is viewed by the majority of Muslims of the world as a Sunni-Shiia clash,” failure to develop “direct dialogue between Moscow and the World Council” will have the most negative consequences all around.