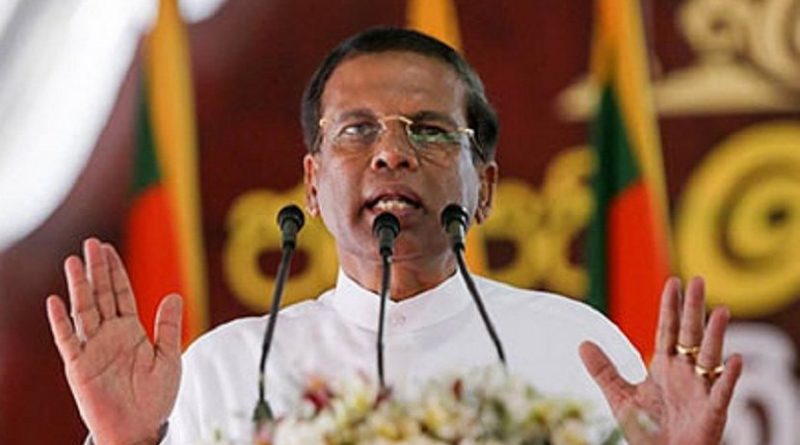 Sri Lanka’s President Maithripala Sirisena said this week that the death sentence would be implemented within the next two months for those who have been convicted of drug offences.

“The death penalty is operative in countries such as India, the US and Singapore. Some of them have the electric chair while some use injections for that purpose,” Sirisena said, adding, “We need stringent laws to make a law abiding and spiritual society. I have been requesting a list of those sentenced to the death penalty for over one and half years now, but it was delayed.”

Sirisena said that, “There is a Pakistani national whom we can easily execute, but I do not want to hang a foreign national. I requested Pakistan to take him back, but this Pakistani national is reluctant to go. He knows that the law will be implemented against him expeditiously in his own country unlike in Sri Lanka.”

Anticipating foreign push-back, Sirisena said, “I request Human Rights Organizations not to object to the move to implement the death penalty as it is done to control the drug menace and underworld activities in Sri Lanka.”

“The country is now proliferated with various drugs including marijuana, cocaine, heroin and Ice. Come what may I would put into practice the decision I took to implement the death penalty within next two-three months,” Sirisena said.

Speaking in parliament, Sirisena said the Welikada Prison had become the head quarters of distributing drugs around the country. “A decision has been taken to transfer all prisoners to the Angunakolapalassea Prison,” he said.

Sirisena also said the truth regarding the plot to assassinate him would be revealed in two weeks.The President who made a statement in parliament said he too had given a statement to the CID on the assassination plot.

“The CID recorded a statement from me a few days ago. The CID will hand over its report in two week’s time to the Attorney General and then the people will get to know the truth regarding the plot to assassinate me,” he said

Rhythm Of Change: What A Drum-Beat Experiment Reveals About Cultural Evolution

Living organisms aren’t the only things that evolve over time. Cultural practices change, too, and in recent years social scientists