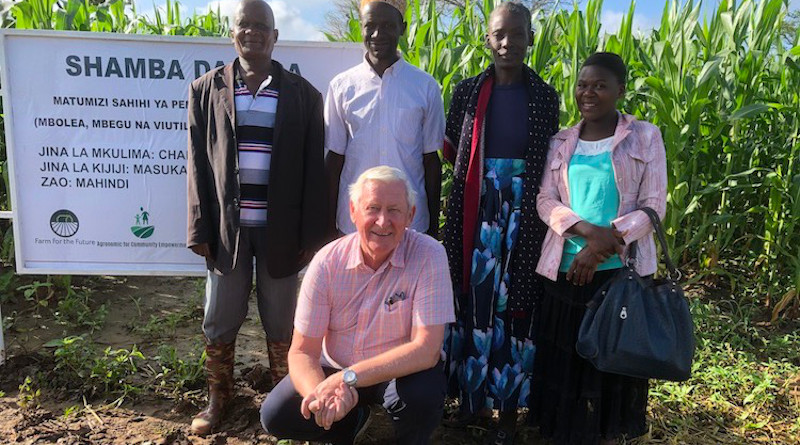 When Osmund Ueland met a group of farmers to pitch his idea about starting a goat milk project at a village in Tanzania’s southern highlands to help poor families improve nutrition and boost incomes, he elicited loud applause from the crowd.

“I congratulate him. This is a grace we need to embrace. We cannot let it slip away,” said Damian Muhomwa. “Whoever doesn’t use this opportunity, will remain poor forever.”

Ueland, a 72-year-old Norwegian entrepreneur, is a chairperson and project manager for Farm for the Future – a regional development project company striving to increase agricultural productivity and improve nutrition and food security with the ultimate goal of reduce poverty in line with the country’s 2025 development vision, and the United Nations Sustainable Development Goals (SDGs).

Under the proposed project dubbed, “Goat milk for nutrition programme”, to be implemented by the company in conjunction with ASAS Dairies and experts from Tanzania’s Sokoine University of Agriculture, 20 families will be given two milk goats each to keep so that when the goats reproduce, after three years, they can sell the offspring and collect approximately four litres of milk to feed their malnourished children and give some to the company.

“The milk will mean a lot to the families,” said Ueland.

Under a similar initiative, known as F-20, the company has sought a 90,000-dollar loan to purchase equipment to support a group of medium farmers in the village increase efficiency and crop productivity.

“We want them to be good ambassadors for others,” added Ueland with a grin.

The criteria for selecting beneficiaries is simple. Farmers should have at least five hectares of land close to the commercial farm run by Farm for the Future. The selected farmers would use the equipment free of charge for two years, and enjoy unlimited access subsidised inputs including seeds, fertilisers and chemicals provided by the company.

“We give smallholder and medium farmers the highest priority,” said Ueland, explaining that when the farmers learn new skills and start reaping better yields and generate profit, they will subsequently pay for the service.

“I think it is quite fair,” says Constancia Kisegendo, a lead farmer in the village. “With all that help we should be able to pay something in return.”

Agriculture is the backbone of Tanzania’s economy, accounting for more than one-quarter of gross domestic product (GDP), providing 85 percent of exports and employing about 80 percent of the workforce. Despite playing a pivotal role, analysts say the country still lacks successful models to inspire smallholder farmers.

However, Farm for the Future, which is committed to helping farmers reach their potential, has positioned itself as a beacon of best agricultural practice in the east African country.

Partly owned by Ilula Orphanage Program (IOP) – a community-based service organisation working to change the lives of children and their families in rural Tanzania, the company leases swathes of land on which it runs a commercial farm and a training centre. They offer vocational training courses in agriculture for youths, farmers and young single mothers who are socially excluded.

Since its inception in 2017, the company has trained more than 500 people and, according to Ueland, about 20 percent use their skills.

“This is a business model to stop poverty,” he stressed.

Looking at the farm from a high vantage point and seeing its rolling beauty gives a glimpse of why the Norwegian entrepreneur chose a career in farming as opposed to comfortable retirement back.

“I want to demonstrate I have done something for the community,” he says.

The Ilula Township nestled at the foot of Udzungwa Mountain range is badly affected by a combination of poverty, HIV/AIDS, unemployment, malnutrition and dismal crop yields.

“We want to change that by helping farmers, youths and young mothers to be financially successfully,” the entrepreneur said.

The emerging agribusiness, which employs 50 people, 11 of them on a permanent basis, has invested 1.1 million dollars of private capital. Last year the company harvested 750 tonnes of maize – an average of 3.5 tonnes per hectare, three times the local average.

“We are not very happy with that, but we learned a lot,” Ueland said.

A dozen of socially and economically excluded young mothers in the impoverished village have stories to tell about Farm for the Future.

Habiba Abula Mtati, a 24-year-old single mother, who was trained a year ago, now runs a successful poultry business at Ilula Sokoni village.

“The training has helped me to innovate this business. I get enough money to support my family,” she said.

In just a few months Mtati’s capital has doubled. She has recently earned Tanzanian 225,000 shillings (100 dollars) after supplying chicken to a local kitchen.

“I am very happy because I am now standing on my own feet,” she said.

Farm for the Future plans to expand its business by erecting a modern headquarters building and a milking station.

As part of its expansion plan the company will team up with Kibebe farm – a leading milk supplier in the region to establish a dairy farm with the capacity to keep 200 cows.

In order to diversify crop production, the company is considering building a reservoir and irrigation system to control the planting of high value crops including seed maize and macadamia trees. The company currently grows only 16 hectares of seed maize and plans to expand production to 40 hectares next year.

The organisation is also planning to build three maize storage silos each with the capacity to hold 500 tonnes.

“The silos will help us to keep the maize and sell it later at a very good price,” Ueland said.

Edward Mbembe, Ilula Township Executive Officer, says the company has the potential to accomplish its mission since it produces on a large scale.

Ali Hapi, Iringa Regional Commissioner, who has commended the company for its commitment to fighting poverty, says: “I have personally visited their farm, I was very much inspired with what they are growing.”