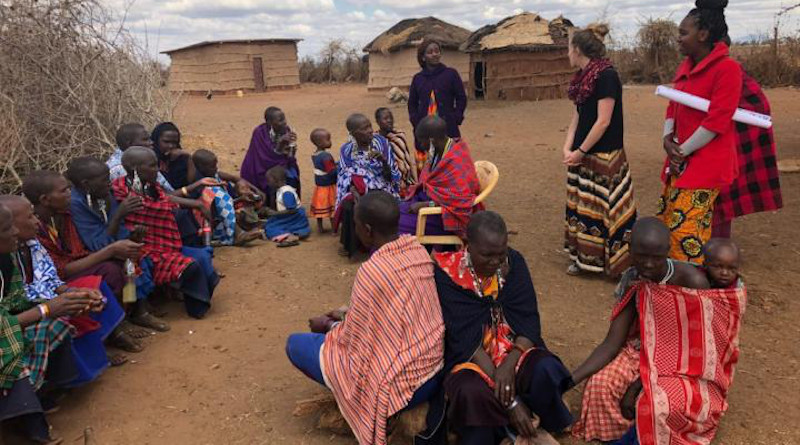 Mobile phones have the power to change the lives of women living in remote communities by reducing barriers to information and increasing access to local economies. However, the introduction of new technologies can hamper efforts to empower women by increasing disparities in power dynamics.

Associate Professor Timothy Baird of the College of Natural Resources and Environment and Kelly Summers, who earned a master’s degree in geography from Virginia Tech in 2019, led a National Science Foundation-funded study examining the impact that mobile phones are having in Maasai communities in Tanzania. Their findings, published in the Journal of Rural Studies, reveal crucial insights into the ways that technology impacts social dynamics in a distinct community in Africa.

A nomadic people adapt to a changing world

The Maasai are an ethnic group of approximately 2 million people, living primarily in Kenya and Tanzania. As one of a number of indigenous groups in Africa to practice pastoralism, which involves the rearing of livestock, the Maasai have traditionally been nomadic, traversing the continent’s Great Rift Valley to find grazing land for their animals.

This way of life, which has sustained Maasai for centuries, is evolving rapidly with the widespread expansion of western society and the ideas and technologies that come with it.

“Maasai are moving into a world some might call ‘modern,'” noted Baird, a faculty member in the Department of Geography who has been researching Maasai communities since 2005. “Already there are aspects of our own ‘western’ lives that are evident in their lives. For example, several developments in Maasai society, from the growth of formal education to the spread of organized religion, have led to changes in the traditional structures that shape Maasai lives. From my vantage, mobile phones have been a kind of steroid for accelerating those changes.”

For a population that herds livestock across wide stretches of wild savanna, mobile phones are a boon to their economy and life. But few studies have investigated how this new technology is impacting the lives of women in Maasai communities, which are traditionally patriarchal. In family units where men exert significant control, often over multiple wives, it is important to understand how phones have impacted gender dynamics.

“As a man, it’s difficult — and really not appropriate — for me to have meetings with individual women or groups of women,” Baird explained. “Maasai men may be quite uncomfortable with such a setup, and Maasai women may have no experience engaging with a man who is not a relative. So I needed help.”

Enter Kelly Summers, who received bachelor’s degrees in natural resources conservation and in forestry from Virginia Tech in 2014.

“While I was serving as an agriculture Extension agent with the Peace Corps in Tanzania, I read an article about Tim’s research and reached out to him about doing graduate work in Tanzania,” said Summers, who is currently working as an environmental protection specialist for the U.S. Environmental Protection Agency. “Because I had experience interacting with women while living in and traveling to remote communities in Tanzania, it was a good fit.”

Summers, working with collaborators, including Maria Elisa Christie, director of women and gender in international development for Virginia Tech’s Center for International Research, Education, and Development, was able to conduct interviews with Maasai women, trying to puzzle out the difficult question of what women’s empowerment might look like in a cultural context bounded by traditions but also stimulated by an expanding world.

“I don’t want to paint a monolithic picture of a whole group of people,” Summers said. “All of the women I spoke with had multiple identities within their communities: some women owned businesses, and some took on the work of tending to livestock. They were mothers and wives. Some were teachers and some were active in churches. There are a range of identities, and phones impact those identities for better or worse, or both.”

Understanding the contexts of empowerment

To understand how a new technology like mobile phones could potentially support women’s empowerment, it was important for researchers to understand what empowerment would look like within the specific contexts of Maasai life.

“To unpack this idea of empowerment, we had to characterize our terms and then look for examples of those characterizations,” Baird said. “We had to ask: what are the aspects of your social world, what are the physical materials, and what are your own personal assets that allow you to make decisions and then act on those decisions. From that, we could develop more targeted questions about issues that embody empowerment and the factors that promote or obstruct it.”

For Maasai women, the barriers to using mobile phones to gain empowerment vary: from access to reliable electricity to technological fluency and literacy, to having the financial resources to pay for data, their ability to use phones is shaped by a broad array of issues that are themselves in a state of radical flux. The study results show that some concerns are unique to Maasai communities, while others seem universal.

“One observation we made was that Maasai women are very much addicted to their phones,” Summers explained. “If they can’t get a charge or they can’t purchase minutes, the feeling they have is very similar to our own anxiety when our phones lose power. We all want to communicate, we all want to be in a community, and phones are becoming a major tool to do that among Maasai women. Those who don’t have access to a phone very much feel that they’re missing out.”

To work around some of the challenges pertaining to access, Maasai women have found cooperative solutions. Baird and Summers cite the important role that informal village community banks play in allowing women to develop business relationships with other women outside their family units, increasing the women’s economic autonomy.

While mobile phones are a positive motivator in seeking these burgeoning opportunities, the authors stressed that mobile phones can also reinforce inequalities. For Maasai women, who typically have multiple roles within family and community structures, mobile phones can simultaneously empower an individual in one role while disempowering her in another.

“The same power dynamics that already existed are now playing out with phones,” Baird said. “We found that men, the traditional gatekeepers in this society, are the ones who often control women’s phones. They can use them as a reward or a punishment, a carrot or a stick.”

Summers added that one of their findings is that Maasai men and women used phones differently: “Men will use their phones to talk to people outside their immediate social circle, but women will primarily talk to people they already know: mothers and sisters and other people in their family unit. They are rarely using their phones to reach out to new people.”

While mobile phones can be used in ways that empower women, the researchers stress that it is more realistic to view this technology as a new arena where tensions between traditional cultural norms and the growing aspirations to engage in a broadly interconnected world continue to play out. Future efforts aimed at using mobile technologies to advance women’s empowerment need to better understand what empowerment would look like within the specific contexts of a distinct culture, and what consequences — positive and negative — are risked when new technologies take root.