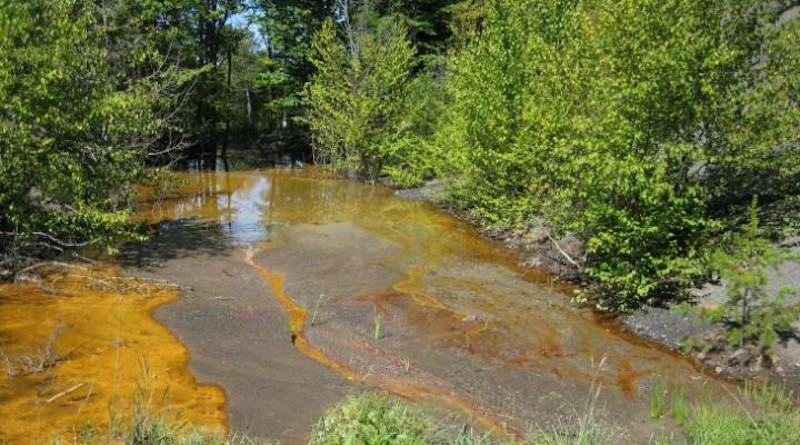 A new way to treat acid mine drainage (AMD) could help transform the environmental pollution problem into an important domestic source of the critical rare earth elements needed to produce technology ranging from smart phones to fighter jets, according to Penn State scientists.

“Acid mine drainage has been a significant environmental concern for many decades,” said Mohammad Rezaee, assistant professor of mining engineering in the College of Earth and Mineral Sciences at Penn State. “This research shows we can modify existing treatment processes in a way that not only addresses environmental concerns, but at the same time recovers valuable elements and actually decreases the cost of treatment.”

A team of Penn State scientists developed a two-stage treatment process that enabled them to recover higher concentrations of rare earth elements using smaller amounts of chemicals than previously possible, the scientists said.

“This technique represents an efficient, low-cost and environmentally friendly method to extract these valuable minerals that are used in a wide variety of consumer and industrial products,” said Sarma Pisupati, professor of energy and mineral engineering and director of the Center for Critical Minerals at Penn State.

Rare earth elements are a group of 17 minerals widely used in advanced technologies and designated by the U.S. as critical to the country’s economic and national security. The U.S. currently imports nearly 100% of these materials, with China producing about 85% of the world supply.

AMD from coal mining operations in Appalachia represents a promising domestic source of rare earth elements because it often contains high concentrations of the minerals, and because it is already being collected and treated due to environmental concerns, the scientists said.

“We are currently incurring costs just to treat the water, and in many cases, we are not even collecting all these minerals,” Pisupati said. “Now we are able to turn what had been considered a waste product into a valuable resource.”

AMD occurs when pyrite rock — iron sulfide — unearthed by mining activity interacts with water and air and then oxidizes, creating sulfuric acid. The acid then breaks down surrounding rocks, causing toxic metals to dissolve into the water, the scientists said.

Traditional treatment methods involve collecting the AMD in retention ponds and adding chemicals to neutralize the pH — an indicator of how acidic or basic a substance is. This causes the dissolved metals to precipitate, or form into solids, and settle out of the water. Up to 70% of rare earth elements can be extracted as a sludge using this process, and the rest are released along with the treated water, according to researchers.

The scientists found they could extract a higher concentration of rare earth elements and other critical minerals by adding carbon dioxide to the AMD and then bringing it to a neutral pH of 7, the target for environmental remediation, in two separate steps.

Using this method, 90% of aluminum was recovered at a pH of 5 and 85% of rare earth elements were recovered by pH 7, the scientists reported in Chemical Engineering Journal.

Adding carbon dioxide to AMD produces chemical reactions that result in the formation of solid minerals called carbonites, the scientists said. The rare earth elements bond with the extra carbonites and precipitate out of the water at lower pH values.

The process, called carbon dioxide mineralization, is an emerging technology being used to remove excess carbon dioxide from the atmosphere. This study represents the first time it has been used to recover large concentrations of rare earth elements from AMD, the scientists said.

“With a simple modification of existing treatment processes, industry could use less chemicals and get more value out of AMD waste,” Rezaee said. “This is the beauty of this research.”