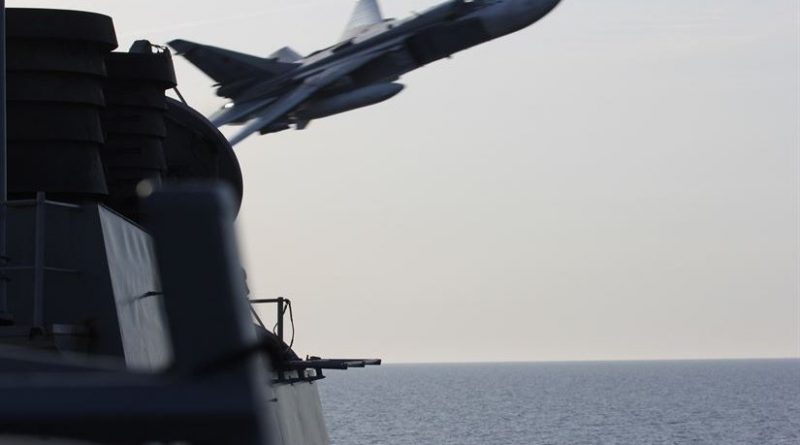 An important part of Russia’s grand strategy in terms of foreign policy is its purposeful creation and management of conflict zones across the post-Soviet space. This has to do with the battle Russia is fighting with the West over the borderlands—i.e., the regions that adjoin Russia from the west and south.

Maintaining the 11 buffer states around Russia (excluding the Baltic states of Estonia, Latvia, and Lithuania) is a cornerstone of the Kremlin’s foreign policy against Western military and economic encroachment. The Russians knew that because of their country’s low economic attractiveness, the South Caucasus states would inevitably turn to Europe. The same was likely to occur with Moldova and Ukraine on Russia’s western frontier, as their geographical proximity to and historical interconnections with Europe render them particularly susceptible to the West’s economic and military potential.

To prevent Western economic and military penetration, the Kremlin has deliberately fomented various separatist conflicts. This policy has been successful so far, as the EU and NATO have refrained from extending membership to Ukraine, Georgia, and Moldova.

However, Russia now faces a different problem: its long-term vision for the separatist regions is becoming increasingly unrealistic. While in the first years following the collapse of the Soviet Union, Russia had to manage breakaway conflicts only in small and poor Georgia and Moldova, Moscow’s responsibilities had increased significantly by the late 2010s.

Following the Ukraine crisis, Donetsk and Luhansk became part of Russia’s “separatist empire.” One could also add Syria to the list. The latter’s inclusion might be surprising, but considering the level of Russian influence there and the stripping away of many of Damascus’s international contacts, the war-torn country is essentially now fully dependent on Russia.

With Syria and Donbas on the roster, the Kremlin now has to manage a range of territories that rely almost entirely, in both the military and the economic senses, on Russia—but that are also geographically dispersed, economically disadvantageous, and geopolitically vulnerable. Even the conflict around Nagorno Karabakh, in which Russia is not militarily involved, is under the geopolitical influence of the Kremlin.

This means that at a time when economic problems resulting from the pandemic, Western sanctions, and the lack of reforms are looming large on the Russian home front, Moscow has to pour yet more money into multiple separatist actors spread across the former Soviet space, as well as Syria. Moscow’s broader strategy of managing separatist conflicts is therefore under increasing stress.

It is more and more difficult for the Kremlin to maneuver across so many diverse conflicts simultaneously. At times, participants have tried to play their own game independently from Moscow. Kyiv and Chisinau, for example, have considered constraining the breakaway territory of Transnistria, and Moscow—which has no direct land or air route (Kyiv would likely block the latter)—can do little about it. In Georgia’s Abkhazia and South Ossetia, Russian forces stand by and watch as NATO exercises take place on Georgian soil—an indication that despite Russia’s military presence, the West is continuing to expand its military support for Georgia.

Geopolitical trends indicate that Russia’s long-term “separatist” strategy to stop Western expansion in the former Soviet space is losing its effectiveness. While it is true that Moscow stopped its neighbors from joining the EU and NATO, its gamble that those breakaway regions would undermine the pro-Western resolve of Moldova, Georgia, and Ukraine has largely failed. Although Russia remains militarily predominant, Western expansion via the powerful weapon of economic influence is proving to be more efficient.

Nor can the Russian leadership solve the problem of its failure to entice states around the world to recognize the independence of breakaway states. For instance, in the case of Abkhazia and South Ossetia, only Syria, Nicaragua, Venezuela, and Nauru have extended them recognition—not a prominent set of states from a geopolitical point of view. This trend is not likely to change anytime soon. Moscow simply does not have sufficient resources—and in any case, US laws withholding financial aid from states that recognize the independence of separatist territories throughout the former Soviet space remain a major disincentive.

Nor does Russia have any long-term economic vision for the breakaway states. Dire economic straits have inevitably caused populations to flee toward abundant medical, trade, and educational possibilities. Usually these are territories from which the separatists initially tried to break away. The Kremlin has failed to transform those entities into secure and economically stable lands. Crime levels have been on an upward trajectory, too, as high-level corruption and active black markets have undermined the effectiveness of Moscow’s spending.

Over the past several years, there have been hints in the media about rising discontent within the Russian political elite on how the breakaway territories (plus Syria) are being run. Questions have been raised about how Russian money is being spent and about the increasingly predatory nature of the separatist (plus Syrian) political elites, which are focused on extracting as much economic benefit as they can from Moscow.

This situation is similar to the state of affairs in the late 1980s, just prior to the Soviet collapse. At that time, members of the Soviet elite started to realize that Moscow had become little more than a supplier to Soviet republics that had grown more and more predatory as corruption skyrocketed and production levels sank. The result was the Soviet dissolution.

The Soviet level of endowment to the republics was far higher than it is now, but a similar pattern is emerging. Moscow has to cope with domestic economic troubles, “disobedience” from separatist leaders, and problematic relations with the West. These challenges make it increasingly difficult for Moscow to pull the strings in multiple separatist regions at once. Even in Syria, the Kremlin’s spending is occasionally questioned by Russian analysts and politicians. The Russian elite has grown less willing to provide direct economic benefit to the separatists, as the return is too marginal to warrant the expense.

Home » Russia’s Troubles With Its ‘String Of Pearls’ – Analysis