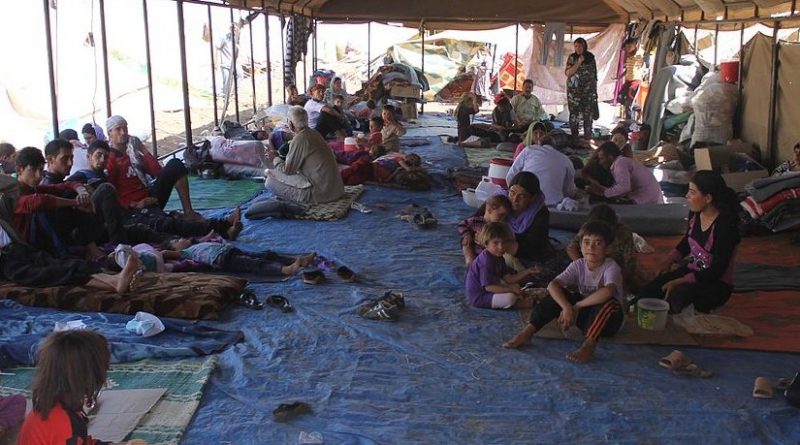 With a translated statement from the Yazidi Prince, Mir Tahsin Beg

When the Islamic State attacked Iraq’s Sinjar Mountain range—home to the largest population of the Yazidi minority—on August 3, they arrived in only a few convoys, estimated to be carrying around 1,000 jihadist fighters. According to a new, private report by an Iraqi with military knowledge (yes, it will become public, hopefully soon), the mountain had a defense force consisting of 16,000 Kurdish Peshmerga and the 11th brigade of the 3rd division of the Iraqi army—led by a Kurdish general. None of the military leaders responsible for defending Sinjar were Yazidis, despite the mountain having a Yazidi majority population estimated at over 84%.

Though vastly outnumbering the attacking jihadists—and maintaining the high-ground advantage—the Peshmerga defenders fled the IS attack without a fight. In mid-August, Christine van den Toorn documented this ignoble abandonment of perhaps the Middle East’s most vulnerable minority group, but only now are we getting a sense of the numbers of Peshmerga who could have successfully defended them and prevented the displacement of several hundred thousand people.

Though as many as 16,000 Peshmerga fled the IS attack on Sinjar—supposedly for not having adequate defenses against the more up-to-date weaponry of the vastly smaller IS force—a group of just 3,000-4,000 local Yazidis with no support has continued to defend a few parts of Sinjar until this very day—embattled but remaining unconquered by the jihadists.

Theories that verge on the conspiratorial circulate among Yazidis who believe the KRG (Kurdistan Regional Government) threw them under the bus in order to elicit greater US military support. Yazidis see Sinjar—an outlying area not contiguous with the three governorates that make up Kurdistan Province—as a sacrifice made by the KRG for longer-term political goals. Perhaps simple cowardice is a better explanation, though one that runs against the grain of the lionized Peshmerga’s popular reputation.

Regardless of why the Peshmerga forces didn’t remain to defend Sinjar against IS for even one day, all of the claims—by Kurds and Iraqis alike—that it would be soon retaken have failed to materialize. Even after two months of US airstrikes in Iraq, IS still maintains control of almost every area that they took from Iraq and Kurdistan, including Sinjar, Tel Afar, and the Yazidi and Christian towns of the Nineveh Plain near Mosul.

Kurds finally captured Rabia from IS this past week, but were unable to continue to Sinjar, and their offensive prompted severe retaliatory attacks from IS that continue today—against Yazidi targets in Sinjar.

One would expect that the US airstrikes would be conducted in coordination with Kurdish ground forces in order to retake important Yazidi homelands—especially since the refugee crisis is choking the Dohuk governorate so badly that schools cannot open, their classroom floors being the new homes for thousands of expelled Yazidi families. But the particular IS bases on and near Sinjar that Yazidis have repeatedly requested be targeted by US airstrikes remain untouched.

Yazidis have given up all confidence in the KRG, most now self-referring as “Yazidi, not Kurdish.” With almost no arms/munitions support from the Iraqi or Kurdish governments, local Yazidi defenders in Sinjar (calling themselves the Sinjar Protection Forces) are trying to stave off IS attacks into the few areas unconquered by the jihadis. Thousands of kidnapped women being held in locations near the mountain—whose presence is confirmed by the UN and whom Yazidi volunteers are keeping track of—could be liberated by the Yazidi Sinjar Protection Forces, if they could just get US airstrikes to hit the IS bases and provide cover for the fleeing women.

I’ve written and spoken on international media about this problem as have many journalists and others (0, 1, 2, 3, 4, 5, 6, 7, 8, 9, 10, 11, 12, 13, 14, 15). Yazidi representatives have begged the State Department and Department of Defense to work directly with local Yazidi defenders in Sinjar. Instead, a pattern of sporadic and occasional US airstrikes continues in Iraq, more than two months since IS began a genocidal campaign of forced conversions, massacres, and sexual enslavement.

Less than one airstrike per day is occurring on IS targets in Sinjar.

A statement from the Prince—the highest figure of Yazidi leadership

The Yazidi plight has become so dire that it has shaken the Yazidi Mir, or Prince—the spiritual leader of the community—from his usual sleepy state of towing the Kurdish political line. Mir Tahsin Beg has issued the following statement in Arabic, which we have translated into English, below:

Since the 3rd of August our Yazidi people have been exposed to the fiercest campaign of genocide [that they’ve experienced] in this century which has taken the lives of more than 5,000 innocent people through the violence of the Da’esh [Islamic State] terrorist organization. More than 7,000 have been kidnapped—mostly women & children—and around 350,000 are now displaced and expelled into the Kurdistan Region, Syria, Turkey, and other countries, and living in very poor conditions, without access to the minimum requirements for basic human needs.

Despite the passing of more than two months of the Yazidi tragedy, and the IS occupation of Sinjar and other Yazidi areas such as Ba’shiqa and Bahzany, and the presence of a Yazidi resistance defending with a patriotic spirit the very existence of the Yazidis—which is simultaneously a defense of the existence of Iraq, of an integral part of Iraq, and its people, honor, and dignity—until now we haven’t seen any serious attempt to support this resistance in order to free Sinjar and other Yazidi areas, and to save those that can be saved from among the kidnapped and expelled Yazidis who are headed for an unknown destination, without the slightest concern of the central [Iraqi] and regional [Kurdistan] governments, as though the Yazidis were part of neither Iraq nor Kurdistan.

In the face of this horrific and catastrophic situation, we are filled with surprise at the Iraqi and Kurdish Regional Governments’ ignoring of our Yazidi tragedy as though this tragedy is not an Iraqi one.

A few days ago, the Kurdish Peshmerga forces announced the beginning of a battle liberate Sinjar via Rabia in coordination with Iraqi forces and with the support of coalition airstrikes led by the U.S., but these forces have not achieved as great an advance as had been expected. This has prompted the IS forces to start fierce attacks on more than one front in Sinjar to tighten the noose on the Sinjar Protection Forces [local Yazidi volunteer defenders] by closing in on them from all sides.

We call on officials of the central and regional governments to bear responsibility—national, political, humanitarian, and moral—for the deterioration of the Sinjar situation and the consequences of it. We urge them to carry out their national duties to our besieged people in the Sinjar mountains, ask them to support the Sinjar Protection Forces logistically and militarily, and to facilitate the prompt delivery of weapons, equipment, and supplies—immediately.

—Prince Tahsin Sa’eed Ali, Head of the Yazidi High Spiritual Council of Iraq and the World

Home » The Yazidis Are Not Getting Support – OpEd