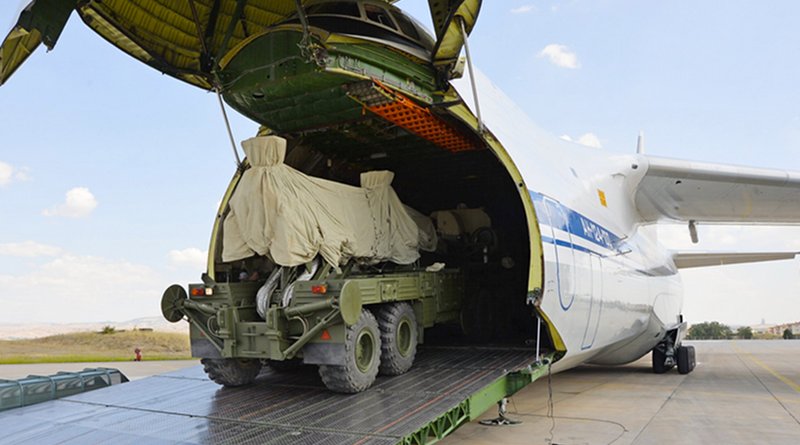 The visit of NATO chief Jens Stoltenberg coinciding with the emergence of footage showing the transit the Russian-made S-400 missile defense system through the Black Sea city of Samsun on Tuesday points to the tension between Turkey’s defense priorities and the security of the transatlantic alliance.

A notice was released the same day to close northern airspace for 10 days due to the S-400 and drone exercises in Sinop, the final destination of the Russian system, right across Russian territories.

The footage came a day after Stoltenberg warned that Ankara’s controversial purchase of the S-400 surface-to air-missile system posed a real risk to allied aircraft and can result in US sanctions.

The US has not yet commented on Turkey’s plan, but excluded it last year from its fifth generation F-35 joint strike fighter program after the country received the first batch of the Russian defense system.

“Stoltenberg was in Turkey to try to calm Turkish-Greek tensions, but also to urge Turkey to refrain from activating the S-400 system, warning that this could trigger American sanctions on Turkey. Proceeding with a test of the system today, when Stoltenberg was in Athens, sent a strong signal that Turkey is doubling down and in no mood to succumb to pressure from its NATO allies.”

According to a Bloomberg report, Turkey plans to test the S-400 next week at a site on the Black Sea coast. While the move does not mean that Turkey is immediately activating the Russian system, reports in Ankara suggest that the activation card may be used as leverage.

The exercises, where 10 British-made Banshee target drones will also be used to test the S-400s, are set to last until Oct. 16. The engagement capability of the S-400 weapons, as well as the detection and tracking ability of the system’s radars and communications system potential, will be tested.

“The timing of the testing simply pushes us to the conclusion that this may be an instrument of messaging toward Russia and Armenia,” Karol Wasilewski, an analyst at the Warsaw-based Polish Institute of International Affairs, told Arab News.

According to Wasilewski, Turkey may want to show its resolve on the Nagorno-Karabakh issue and talk Russia into negotiations about the conflict.

“This is not the first test. The first one happened in November 2019. Turkey tried it once and endured no consequences, so I think now decision-makers are also sure there will be no consequences,” he said.

However Aaron Stein, a Turkey expert and director of research at the Foreign Policy Research Institute, said that the timing of the S-400 testing was more geared around the US political calendar and the upcoming elections.

“As we enter that lame duck period from November to January, where there is the possibility of a delay in reporting electoral results because of the large number of mail-in ballots, now would seem to be a good time to test the S-400 and delay the imposition of sanctions,” he told Arab News.

As NATO does not have a mandate to discuss the S-400 issue, Stein regards the subject first and foremost as a bilateral dispute between Washington and Ankara.

Ankara’s potential activation of the $2.5 billion Russian system is believed to be a game-changer in the region with all the major risks that its connection to other NATO radar systems could bring in terms of cyberthreats.

“This is just going to harden anti-Turkey sentiment. Ankara is already under a de facto arms embargo and it may soon face sanctions under Section 231 of the 2017 Countering America’s Adversaries Through Sanctions Act (CAATSA). It has also lost the F-35. Things are already bad and they may get worse,” Stein said.

Goldman said that the recent US move to station a ship in Crete, in response to Turkey using its S-400 system to lock onto Greek F-16 fighter planes, was fuel added to the fire.

“Turkey, rather than seeking to douse the flames, is taking the dispute up a notch,” he added.

Goldman said the testing move was destined to aggravate tensions with its Western partners just when Turkey needed them the most – for balancing against Russia, for diplomacy with Greece, and most importantly, for financial help amid Turkey’s worst economic crisis in a generation.

“This move is in line with Ankara’s increasing tendency to escalate when confronted with a challenge,” he said.

He agreed that the timing of the S-400 test was also a response to recent events in the US, as Turkey may be trying to take advantage of the Washington power vacuum.

“As Turkish Foreign Minister Mevlut Cavusoglu said back in September 2019, Turkey did not buy the S-400 missiles just as a prop, and it makes sense for them to want to deploy the system given the recent saber rattling with Greece, France, and other countries. Perhaps Ankara thinks that once the S-400 system is in place, it will then still be able to get Western financial help, like a swap line from the US Fed, once these tensions pass,” he said.

Home » Turkey To Test S-400 Defense System Next Week: What Next? – Analysis