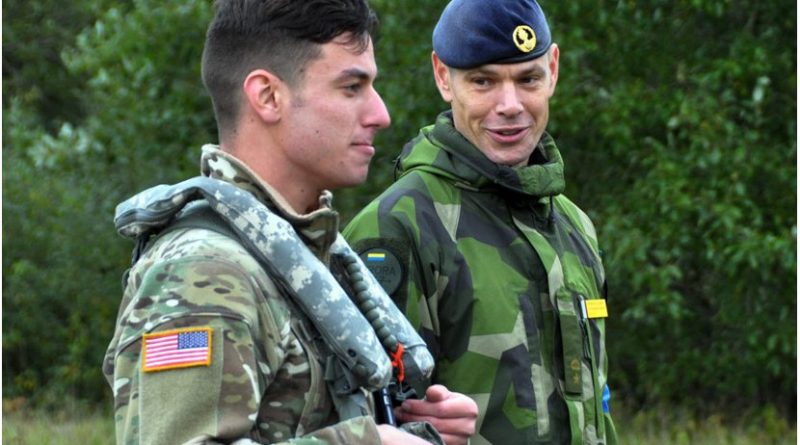 (FPRI) — In late 2014, Swedish authorities spotted what many suspected was a Russian submarine lurking off Stockholm. The incident set off alarm bells among Swedes. It reminded them of a similar incident in 1981, when a nuclear-armed Soviet Whiskey-class submarine ran aground a few kilometers outside Sweden’s main naval base.[1] Following Russia’s invasion of Georgia, annexation of Crimea, and intervention in eastern Ukraine, the recent submarine scare served to underline the threat that a resurgent Russia could pose to Sweden.

No wonder that, despite Sweden’s long tradition of neutrality and an “alliance-free” foreign policy, Swedish leaders of almost all political stripes began to consider closer ties with NATO. That of course irked Russia. Victor Tatarintsev, the Russian ambassador to Sweden, responded with what seemed like a backhanded reassurance that Russia had “no plans to invade Sweden.” In May 2017, Russian President Vladimir Putin put it more bluntly. He warned that if Sweden joined NATO, Russia would take military measures “to eliminate [the new threat].” While Swedish Foreign Minister Margot Wallström clearly stated that her government would not seek NATO membership, Sweden has moved closer to the Alliance. NATO naturally welcomed the shift, given Sweden’s strategic importance to NATO’s defense of its Baltic member countries.

Observers have long described Sweden’s security policy as “non-participation in military alliances during peacetime and neutrality during wartime.”[2] But that does not mean that Sweden takes its security environment lightly, especially when it comes to the Baltic Sea. For centuries, its waters have been a thoroughfare for not only trade, but also power projection. Should unfriendly forces control it, they could easily threaten Sweden and even reduce its access to the wider world. Hence, Sweden has had an enduring national interest in the security of the Baltic Sea and the coast beyond.

Throughout the Cold War, the Soviet Union controlled the Baltic coast. Because of that, Sweden kept up its guard. It maintained a sizable standing military and nurtured a world-class defense industry. That attention to military preparedness has had a long history in Sweden where a popular nineteenth-century slogan proclaimed: “one man, one gun, one vote.”

After the Cold War, Sweden cut its defense expenditures. But the advent of an aggressive Russia across the Baltic Sea has led Sweden to rethink its military posture. In September 2017, it raised its defense budget by five percent over its already planned increase. It also recently reinstituted conscription to bring its military back to full strength. Starting in 2018, it will conscript 4,000 18-year-olds. That number will rise to 8,000 per year by 2022. Sweden still has more to do. Apart from the 60 JAS 39E fighters and two A26 diesel-electric attack submarines already on order, Sweden will need more and newer armaments for its soon-to-be larger armed forces.

Even so, Sweden has begun to strengthen its defenses on Gotland, a strategic island in the Baltic Sea. Contrary to reports in 2016 that reestablishing a permanent military presence on Gotland was unexpected, Sweden’s Defence Policy white paper—which all of Sweden’s major political parties agreed to in 2015—outlined Gotland’s rearmament as part of a broader set of security precautions that Sweden would take through 2020.[3]

While it is perfectly understandable why neutral Sweden has felt the need to be better armed, what is unusual is how enthusiastically it has embraced multilateral defense cooperation. Roughly a decade ago, Sweden joined the European Union’s (EU) Common Security and Defence Policy and led the effort to create the EU’s 2,400-man Nordic battlegroup. Soon after, it helped to establish the Nordic Defence Cooperation, which brought together five Nordic countries, including two NATO members.

Recently, Sweden has stepped up its collaboration with NATO. It signed a host-nation agreement that allows NATO forces to train in Sweden and boosted its participation in NATO military exercises, like Baltic Operations (Baltops) and Steadfast Jazz. Sweden has gone so far as to commit a fighter squadron to fight alongside NATO’s rapid-reaction force.

Sweden is also shedding its long-time aversion to a bilateral military relationship with the United States. The number of meetings between Swedish defense ministers and U.S. secretaries of defense has noticeably risen, from an average of once every two years over the last decade to twice a year in 2016 and 2017. During Swedish Defense Minister Peter Hultqvist’s visit to the Pentagon in May 2017, he announced not only Swedish participation in NATO’s Baltops 2017 exercise in June, but also the involvement of about 1,000 U.S. troops in Sweden’s largest military exercise in 23 years. Over 20,000 troops from nine countries (seven of them NATO members) took part in the exercise, called Aurora 2017, which spanned three weeks in September and focused on the defense of Gotland.

Swedes—ever conscious of their cherished neutrality—have long opposed their country joining multilateral defense organizations, like NATO. But fewer of them do so than before. A national poll found that a slim plurality of Swedes favored membership in NATO for the first time in 2014.[4] While opinions of the public slipped back the other way two years later, those of Swedish leaders did not. Most now believe that Sweden needs to form stronger partnerships, though not alliances, with NATO and the United States. From their perspective, the real question is how Sweden can translate those partnerships into greater security without formal defense treaties.

Such partnerships bring Sweden close to breaching its traditional neutrality and “alliance-free” foreign policy. Someday, it may be forced to choose one approach over the other. In the meantime, Swedish leaders will continue to wrestle with what it means for Sweden to be a partner, but not an alliance member—to be nonaligned, but not entirely neutral either.

About the author:
*Felix K. Chang is a senior fellow at the Foreign Policy Research Institute. He is also the Chief Strategy Officer of DecisionQ, a predictive analytics company in the national security and healthcare industries. He has worked with a number of digital, consumer services, and renewable energy entrepreneurs for years. He was previously a consultant in Booz Allen Hamilton’s Strategy and Organization practice; among his clients were the U.S. Department of Energy, U.S. Department of Homeland Security, U.S. Department of the Treasury, and other agencies.