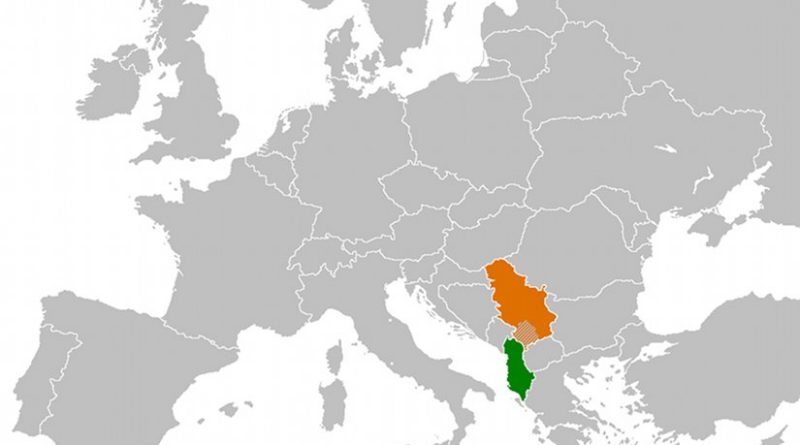 The soccer match between Serbia and Albania in October of 2014, during which the famous drone incident unleashed violence towards the Albanian players, has already entered the list of most famous sports events. It illustrates the already-known logic that soccer still harbors the most aggressive, nationalistic sentiments. Albania was initially announced by the UEFA to have lost the game only to be rewarded the win later by a decision of the Court of Arbitration for Sport (CAS), which gave the victory to the Albanian team when it stripped Serbia of three points. The rollercoaster of nationalistic rhetoric and soccer matches went on with the following game played in Albania, where Serbia scored twice, leaving Albanian fans mourning. The game was highly policed, as the Albanian government took almost draconian security measures to ensure that not even the smallest incident would happen to the Serbian team while in Albania. A few days later, winning with a striking 3-0 score against Armenia, Albania secured its historical entry into the European Soccer Championship to be held next year in France. Social media exploded with various comments and memes mocking Serbians by telling them to sit back, relax, and watch Albania kick the ball in Paris.

However, one would be mistaken to think that bilateral relations between Albania and Serbia are only recently bad. The incidents and events occurring during this year were not primarily negative and were not limited to the sports events. Albanian and Serbian prime ministers, who were involved as main players in the Berlin and Vienna summits, have flanked Chancellor Merkel in regional and EU events, displaying an unusual potential for dialogue and even camaraderie.  Youth exchanges that will lead to a regional youth center, coordinated both in Tirana and Belgrade, have produced some positive media coverage and a warm social reaction after so much negativity was poured out on TV and in newspapers in 2014.

It is an important step for respective governments to take such a commitment to normalize bilateral relations in the face of difficult pasts. However, for the effort to be successful, more society segments need to be involved. Much more needs to be done with the media, which often perpetuates myths and controversial topics despite their relevant lack of importance for current challenges faced by both countries.

Albania and Serbia share difficult historic baggage. The dissolution of Yugoslavia, the conflict in Kosovo, and the subsequent independence of Kosova have been a powerful rollercoaster for the two countries, which each claim to be home to the largest ethnic groups in the Balkans. However, even between Serbia and Kosova, some signs of normalization due to EU sponsored dialogue are starting to materialize beyond symbolic handshakes – such signs are evolving into important bilateral deals.

Most importantly, collaboration projects between some actors that have known one other for a longer time, and have found ways to cooperate in the past despite differences, have matured into more serious and sustainable joint initiatives.

Civil society organizations have once again taken the lead to strengthen their bonds and include other actors in hopes to find truth in the maxim “to know each other is to stop hating each other”.  In this context, two of the most prominent institutions of civil society in each country – the Albanian Institute for International Studies and the Forum for International Relations of the European Movement of Serbia – have joined hands in establishing the first joint Centre for Albanian-Serbian relations to promote the normalization of bilateral relations, encourage cooperation and interaction among youth, media and business community and to keep the integration impetus for better regional cooperation strong.

Beyond the frenzy both in social media and in the stadium seats, the spirit is fragile but positive among ordinary citizens. There seems to be a real potential amidst Albanian society to back the normalization project. According to a national poll of AIIS, around half of the citizens asked believe their country had normal relations with Serbia. Most importantly, around 90 percent of the citizens recognized that the improvement of relations with Serbia was in the best interest of both countries, and hence each country should enhance its relationship with Serbia for its own sake rather than for the good marks handed down from Brussels or Berlin.

Relations between Serbia and Albania hold a key influence in terms of the overall stability in the western Balkan region. This particular importance is recognized by citizens in Albania, as the overwhelming majority of them point out that bilateral relations are key to security and stability for the entire region.  Should Albania and Serbia succeed in building an improved and structurally viable economic, political and social bond, the positive effects will reverberate in all their neighboring states. Such a relationship could become a tool for facilitating, then, the evolvement of several outstanding regional issues and also provide impetus to the EU’s integration of the western Balkans. Therefore, the popular support becomes even more pertinent. Particularly encouraging are the results pertinent to cultural cooperation. More than 80 percent of citizens are interested in joining more cultural activities with Serbia. In this regard, the work has already started. The latest example comes from the current edition of the Tirana International Film Festival, which is hosting special programmer screening movies from Serbian directors and film students. Borrowing an idea once again from sports, one could say that the difficult hurdle-run towards normalization has begun for these two countries that share considerable, historical enmity baggage. However, for this to be successful, the participating athletes need to be drawn inclusively from societal groups. Their blouses cannot simply say the names of the respective prime ministers, otherwise they will eventually stumble.

*Alba Çela is Deputy Director at the Albanian Institute for International Studies, Tirana based think-tank.

**The results shown here are from a national poll with a representative sample of 1200 citizens taken by AIIS in Albania during September 2015.

Home » Albania And Serbia: The Recent Hurdle-Run Towards Normalization – Analysis