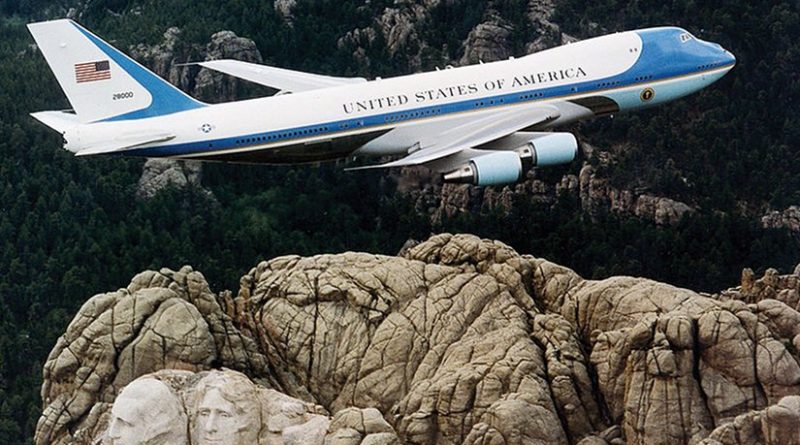 President-elect Donald Trump chided Boeing in a tweet, arguing that its new Air Force One design was too expensive and should be canceled. As the topic ‘trended’ on Twitter, the aerospace giant’s stock took a hit.

Boeing is currently in the process of building two specialized jets, based on the 747-800 platform, to serve the White House. On Tuesday morning, Trump tweeted that the costs of the program are “out of control, more than $4 billion. Cancel order!”

Boeing is building a brand new 747 Air Force One for future presidents, but costs are out of control, more than $4 billion. Cancel order!

“I think it’s ridiculous. I think Boeing is doing a little bit of a number,” Trump said later in the day, speaking to reporters at Trump Tower in New York. “We want Boeing to make a lot of money, but not that much money.”

Immediately after Trump’s tweet, Boeing’s stock fell precipitously, recovering a bit over the next couple of hours.

This is what happened to Boeing’s stock after @realDonaldTrump‘s Air Force One tweet https://t.co/MGUi8eD7ZN pic.twitter.com/HXJvhqUWpr

Back in 2013, Trump boasted on Twitter of buying Boeing stock after it went down due to troubles with the 787 Dreamliner. “Great company!” he tweeted. Trump sold that stock in June 2016, his spokesman Jason Miller told reporters on Tuesday.

It is not the first time a company’s stock has slid as a result of a tweet, noted Ed Harrison. “But this is usually as a result of a stock analyst giving an opinion or breaking news revealing damaging information,” he said. “Donald Trump takes on individual companies in a way that is unprecedented for a major American political figure. We should expect more tweets targeted at specific companies.”

“Boeing has to be concerned right now, and not just because of this Air Force One contract. The airline manufacturer is also worried about Trump’s tough talk on China, which is one of Boeing’s largest and most-promising customers,” said Boom Bust co-host Ameera David. “If Trump does anything to disrupt that business relationship, we’re likely to see a much more damaging and long-lasting knock on the company’s share price.”

“We are currently under contract for $170 million to help determine the capabilities of these complex military aircraft that serve the unique requirements of the President of the United States,” Boeing said on Tuesday.

Air Force One is the call sign of any US aircraft which has the president on board. A dedicated airplane has been used for the purpose since 1945. The current Air Force One is a heavily modified Boeing 747-200, built in 1986. It has an onboard hospital, electronic countermeasures and heavy shielding to protect occupants from an electromagnetic pulse during a nuclear attack. It can also be refueled in the air, like most US military planes.

Trump himself is using a Boeing 757-200, manufactured in 1991 and heavily modified since. It is smaller, slower and has a shorter range than the existing Air Force One, but a lot leaner: it costs $8,383 an hour to operate, compared to the $179,750 per hour for the Air Force One.

During the campaign, Trump would often arrive on the stage of his rallies accompanied by the dramatic opening theme of the 1997 film “Air Force One.”