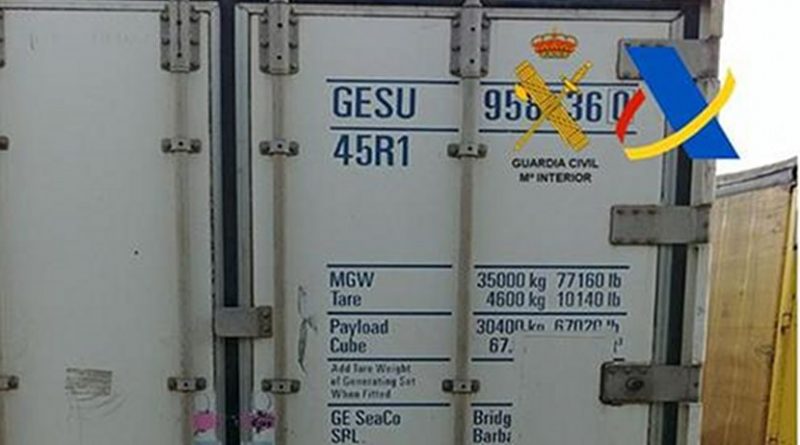 Container seized in Spain with a total of 5,883 kilograms of cocaine being found in the Port of Algeciras. Photo Credit: Ministerio de Hacienda y Función Pública

The Spanish Tax Office, working closely with the Guardia Civil, have completed the biggest seizure of cocaine in Spain for 18 years, with a total of 5,883 kilograms of the drug being found in the Port of Algeciras. The drug was hidden in a container that according to its Customs documentation should have been carrying bananas from the Colombian city of Medellin, with the final destination being El Prat de Llobregat in the province of Barcelona.

So far three people have been arrested in the operation: one heading the company importing the container that transported the cocaine and two close accomplices.

“Operation Nativity” began with investigations carried out by the Sub-Directorate General of Operations of the Department of Customs and Excise of the Spanish Tax Office. Following on from these prior actions, the final phase of the operations was decided on and implemented by the Risk Analysis Unit (Spanish acronym: UAR) of the Customs of Algeciras, a joint unit in which officials from the Tax Office work together with the Guardia Civil under orders from the Customs authority.

The operation began when the Sub-Directorate General for Operations of Spanish State Tax Office (Spanish acronym: AEAT), based on information available in the AEAT databases and other information obtained by it, detected a suspicious shipment and applied the usual investigative techniques used by the Agency to determine the risk potential of the freight.

Based on this risk analysis, and examination of the commercial and maritime documentation that accompanied the shipment, a suspicious container was selected that according to the accompanying documentation was transporting a shipment of bananas aboard the ship Banak with its final destination being El Prat, after docking at Algeciras.

Once selected, the Sub-Directorate of Operations of the Tax Office requested the Customs Authorities in Algeciras to inspect the merchandise in the container physically as there were well-grounded suspicions that the container could contain cocaine.

The timely alert received by the Customs was submitted to the Risk Analysis Unit, which carried out the check and confirmed the existence of drugs in the previously selected container.

The check was carried out on 28 November in the port of Algeciras. It revealed a total of 5,883 kilograms of cocaine in packets of one kilogram each, marked in the usual way by drug smugglers to identify shipments to different destinations or organisations.

The seizure in Algeciras is the biggest of cocaine by the Spanish police in 18 years, the largest amount seized in a container in Spain and the second biggest in the history of drug smuggling in our country in any means of transport. The biggest was the seizure made on the high seas in 1999 (7.6 tons) by the National Police Force and the Customs Service of the Tax Office.

As a result of the seizure, investigations are being carried out at present, under the direction of the Investigating Judge of Court No. 1 of Algeciras (Cadiz), in coordination with the Special Drugs Prosecutor, for the purpose of identifying those responsible for the operation.

So far, three people have been arrested. One is the head of the banana importing department of the company importing the container that transported the cocaine. He was also responsible for the purchase, sale and logistics of the fruit.

One Honduran and one Portuguese national have also been arrested. Both are resident in Barcelona, and are people trusted by the head of imports, with power to make decisions in relation to the logistics, sale and shipment of the banana containers from Colombia.

The three individuals have been arrested for the crime of alleged membership of a criminal organisation, as well as crimes of smuggling and drug trafficking. Investigations are continuing and further arrests have not been ruled out.

Home » Spain: Biggest Cocaine Seizure In 18 Years Made In Algeciras