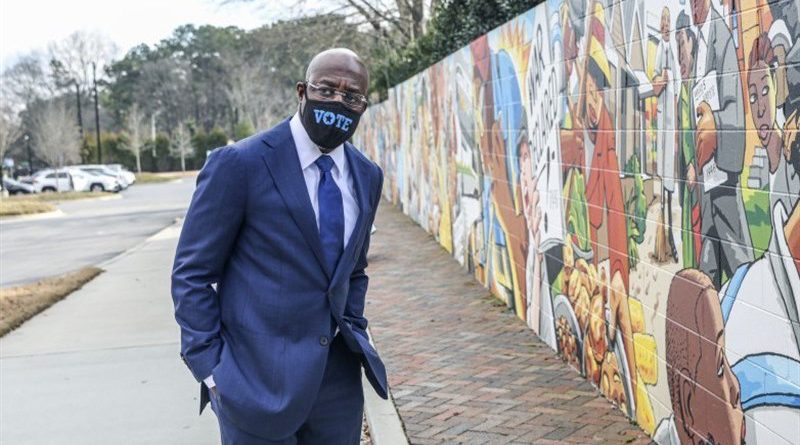 Raphael Warnock, the US Democratic Senator-elect for Georgia, believes that the Bible teaches socialism and that embracing a Marxist economic platform “actually makes you a Christian.”

In a sermon delivered in 2016 in Atlanta’s Ebenezer Baptist Church, Warnock chided that “evangelicals who stand on the Bible” but reject socialism need to “go back and read the Bible.”

The early church was a socialist church. I know you think that’s an oxymoron, but the early church was much closer to socialism than to capitalism. Go back and read the Bible. I love to listen to evangelicals who stand on the Bible. Well, they had all things in common. They took everything – I’m just preaching the Bible – they took all of their things and they had all things in common. But even the folk who say they just follow every word of the Bible, they’re not about to do that. But if we would just share what we have, everybody can eat, everybody ought to have water, everybody ought to have healthcare. It’s a basic principle.

And I don’t mind telling you that those who have more ought to give more. The strong ought to bear the infirmities of the weak. And in the nation and in the church, to whom much is given, much is required. We need to level the playing field. And to be concerned about the poor does not make you a socialist; it actually makes you a Christian, and it means that you believe that everybody is a child of God.

Warnock’s statement that politicians should impose the same policies “in the nation and in the church” so conflates the two realms that, were it uttered by a conservative, it would instantly trigger accusations of theocracy.

Warnock’s biblical exegesis and application of this passage are deeply confused. The Christian view of voluntary charity could hardly differ more from the secular, socialist vision of mandatory government redistribution of wealth.

Socialists often cite Acts 4:32-37, which states that immediately after Pentecost no Christian would “say that any of the things he possessed was his own, but they had all things in common.… Nor was there anyone among them who lacked; for all who were possessors of lands or houses sold them, and brought the proceeds of the things that were sold, and laid them at the apostles’ feet; and they distributed to each as anyone had need.” Far from establishing socialism, the Bible highlights the Christian alternative to Marxism.

Second, the Apostle Peter underscored the voluntary nature of Christian tithing. Just a few verses later, he upbraided Sapphira, who sold her land but held back part of the proceeds: “Was it not your own? And after it was sold, was [the money derived from the sale] not in your own control?” Christians freely give their alms to poor out of love, personally tailoring their intervention to the recipient’s need. Socialism forcibly confiscates other people’s property and distributes it to the well-connected through one-size-fits-all government programs. Even Warnock’s predecessor, Rev. Martin Luther King Jr. – who had a complicated view of what he deemed “socialism” – described the one overriding reason that he rejected Marxism: “Man becomes hardly more, in communism, than a depersonalized cog in the turning wheel of the state.” History shows that socialists often feign concern for the poor in order to seize church property for their own ends.

Third, Christian charity is administered through the church, not the government. “A close look at that passage will reveal that not only is it not socialism, but it is antithetical to socialism,” said a far greater preacher than Warnock, the late Rev. Dr. D. James Kennedy, who spoke at the Acton Institute’s first annual dinner. “You’ll notice that they brought the money and they laid it at the feet of – Caesar? Pontius Pilate? No, they laid it at the feet of the apostles.”

Socialism regards all intermediary institutions that stand between the individual and the government as anathema. Marxism, Rev. Kennedy said, teaches that the federal bureaucracy must become the “provider for the needs of people, so they will worship the state” – a statement since verified by social science. Researchers led by Adam Kay of Duke University discovered that church and state have a “hydraulic relationship”: The more people put their faith in one institution, they less they trust the other. His research team concluded, “The power and order emanating from God can be outsourced to the government.” Further scholarship reveals that socialism, with its unattainable promises of an earthly utopia, often gradually displaces Christians’ belief in God. (See “How socialism causes atheism,” the cover story of the Summer 2019 issue of Religion & Liberty.)

Fourth, the Bible illustrates how holding all things in common can introduce conflict even into a tiny community of faithful Christians administered by the Apostles themselves. Shortly after Christians chose to share their private property, disputes broke out along nationalist lines. “There arose a complaint against the Hebrews by the Hellenists, because their widows were neglected in the daily distribution” (Acts 6:1). If a small, relatively homogenous community of Spirit-filled Jewish believers led by actual saints cannot avoid dissension, can a diverse nation of 328 million people that shares no religious or moral common ground fare better?

Fifth, if Jesus intended “socialism” to be the universal way of life “in the nation and in the church,” there’s scarce evidence for it from Christian history. Not a single verse of the Bible commands Christians to pass specific economic legislation or to compel other people to give a cent of their money against their will. And world history is devoid of a 2,000-year-old Christian socialist state – an odd state of affairs, since Jesus said, “The gates of Hell shall not prevail” against His Body. If a socialist government is an integral part of God’s plan, then it failed – and not merely once, but over and over again.

American history is littered (one can scarcely think of a more appropriate verb) with the bones of failed communes and “voluntary communities” like Robert Owen’s New Harmony, which came crashing down under the weight of free riders. One member wrote, “Instead of striving who should do most, the most industry was manifested in accusing others of doing little.” Other would-be Edens fell through their leaders’ hypocrisy, nepotism, or sexual misconduct.

If Warnock wished to enter a voluntary community where all members hold their goods in common, he could establish one – temporarily. The median existence of early socialist communes amounted to a mere two years. “These experiments in socialism did not turn out well, and the idea itself might have wasted away in infancy had it not been taken up by a symbiotic team of unique prophetic power: Karl Marx and Friedrich Engels,” wrote Joshua Muravchik in his book Heaven on Earth. “They shifted the basis of socialist hopes from individual experiments to broader historic trends, which fortified it against empirical failure.”

Marxism’s sweeping view of history manifest itself in the church through such varied movements as the Social Gospel, liberation theology, and certain mainline churches choosing to hybridize politics and religion – such as when World Council of Churches financially supported Zimbabwe’s Robert Mugabe.

Warnock’s contention that embracing the welfare state “makes you a Christian” is far from the only time his church activity has raised eyebrows. Fidel Castro spoke at Abyssinian Baptist Church in 1995 when Warnock served as its youth leader. Warnock evaded questions about whether he attended the speech. He greeted Castro’s death with a Bernie Sanders-like appreciation of Castro’s “complex” legacy before accusing America of holding “political prisoners.” Dozens of black pastors called Warnock out for saying that abortion represents “human agency and freedom.”

Georgia voters have chosen whether Warnock’s misguided theology about the early church will affect national policy for the next six years. The state’s two run-off elections has determined the balance of the Senate and decide whether the progressive Left can institute such policies as packing the Supreme Court, abolishing the Senate filibuster, and granting statehood to Puerto Rico and the District of Columbia. The high stakes emphasize how critical it is that religious leaders properly understand the intersection of theology and economics.

Home » Is Raphael Warnock Right That ‘The Early Church Was A Socialist Church’? – OpEd

2 thoughts on “Is Raphael Warnock Right That ‘The Early Church Was A Socialist Church’? – OpEd”