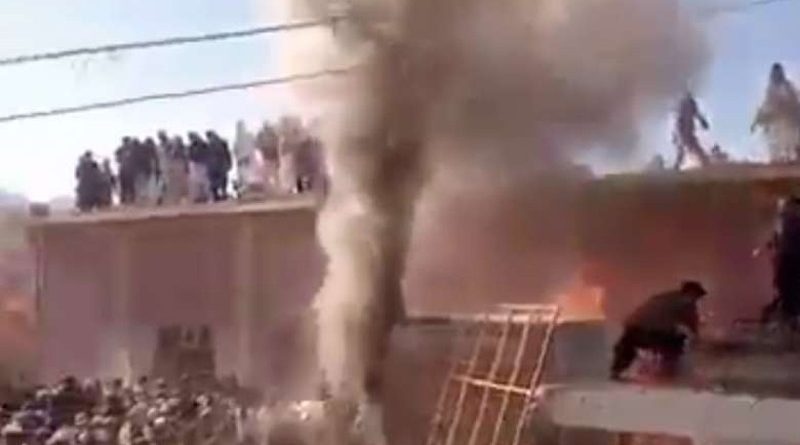 A mob attacks the shrine of Shri Paramhans Ji Maharaj in Teri village of Karak district in Khyber Pakhtunkhwa province of Pakistan on Dec. 30. (Photo supplied)

Soon after he became Prime Minister, Imran Khan pompously announced that “Naya [new] Pakistan is Quaid’s [Jinnah’s] Pakistan and will ensure that our minorities are treated as equal citizens” and by adding “unlike what is happening in India,” also took a jibe at his Indian counterpart. Since Khan gave this assurance and also invoked the name of Pakistan’s founding father, it was largely expected that he would address the issue of the alarming rise in the number of attacks on minority communities and their religious sites in real earnest with the seriousness that it rightly deserved.

However, even though Khan has been in office more than two years, this hasn’t happened and the recent incident of a century old religious shrine in Karak district of Khyber Pakhtunkhwa [KP] province [where revered Hindu saint Shri Param Hans Ji Maharaj breathed his last] being vandalised in broad daylight and under the very nose of the local police is the latest addition to the burgeoning list of unprovoked assaults the minorities continue to face in Pakistan.

Vandalism of the Karak shrine isn’t an aberration. Au contraire, it conforms to a long ongoing pattern, wherein clerics [or even ordinary persons] craftily distort religious beliefs to instigate mobs into believing that wanton acts of violence and coercion against minorities communities, like destruction of their religious sites and forcible marriages with their girls are acts of righteousness and have religious sanction respectively. However, what makes Karak shrine vandalism even more reprehensible is the fact that not only was this shrine vandalised earlier in 1997, but that authorities had even turned down the genuine request of Pakistan Hindu Council [PHC] for financial assistance to rebuild it. Consequently, this shrine was rebuilt with funds collected by PHC-only to be vandalised once again after 23 years, proving that such incidents are commonplace in Pakistan.

But instead of addressing the serious problem of the rapidly growing intolerance towards minority communities, Pakistan’s Foreign Office [FO] has instead sought to trivialise this grave issue by playing politics and resorting to its typical ‘oranges-and-apples’ comparisons as well as resorting to rhetoric. If the FO is to be believed, then Pakistan’s response to this shocking incident was par excellence. So, it’s no surprise that the FO statement states, “The clear difference between India and Pakistan in respect of minority rights can be gauged from the fact that the accused in the Karak incident were immediately arrested, orders were issued for repair of the temple, the highest level of judiciary took immediate notice, and senior political leadership condemned the incident.”

The FO went on to add, “Whereas, in India, the blatant acts of discrimination against Muslims and other minorities take place with state complicity. The Indian leadership is yet to condemn the perpetrators of the Delhi massacre in February 2020, let alone bring those criminals to justice.” But it seems that Islamabad doesn’t realise that even if the allegations it has levelled against New Delhi were true, this puerile comparison in no way either condones or mitigates the reprehensible vandalism of Karak shrine.  But things didn’t end here and the FO even went as far as saying that “As a perennial purveyor of state-sponsored discrimination against its minorities, India is in no position to pontificate on the issue of minority rights elsewhere.”

It’s really hilarious to hear such a tedious sermon from a nation, in which, [according to Human Rights Watch [HRW] 2020 World Report] religious minorities “continued to face violence, discrimination, and persecution, with authorities often failing to provide adequate protection or hold perpetrators accountable.” It’s also ironical that a country that has been designated by Washington as a ‘country of serious concern’ for engaging in or tolerating “systematic, ongoing, egregious violations of religious freedom,” has the gall to pontificate on how to treat minorities. But on the serious side, display such an irresponsible attitude by Islamabad not only validates its inclusion in the US State Department’s ‘country of serious concern’ list but also justifies the terse observations of HRW on Pakistan’s pathetic treatment of its minorities.

So, while Islamabad may keep apportioning blame for the ongoing religious and sectarian violence within the country on inimical ‘foreign’ powers, the reality is that it is itself responsible for such a sorry state of affairs. Islamabad’s problems stem from its proclivity for adopting an ostrich-like approach on the persecution of minorities and by doing so, it’s doing the country and its people great disservice because such apathy towards communal incidents not only fans fundamentalism and encourages religious intolerance but also creates a fertile environment for breeding sectarian animosity.

Therefore, while mandarins in Pakistan’s FO may be congratulating themselves for what they believe to be yet another diplomatic ‘victory’ by deftly using the Karak Hindu shrine vandalism incident to tar and feather New Delhi, the harsh truth that despite being full of ‘sound and fury’ the FO’s crude response ‘signifies nothing’.

In its bid to highlight Islamabad’s prompt response, the FO said “… the accused in the Karak incident were immediately arrested, orders were issued for repair of the temple, the highest level of judiciary took immediate notice, and senior political leadership condemned the incident.” While what the FO has stated is undoubtedly true, but it has simultaneously omitted or contorted some inconvenient facts that expose Pakistan’s institutionalised apathy as regards safeguarding fundamental rights of minorities. Infact, the CJP’s observation that the mob which vandalised and destroyed the Karak shrine “went with an impunity,” speaks volumes about institutionalised discrimination against minorities in Pakistan.

When Dr Suddle admitted before the three-judge bench headed by CJP that the KP Evacuee Property Trust Board [EPTB] “did not protect the [Karak] shrine,” Justice Ijazul Ahsan asked KP IG as to how could such a major breach of law occur when a police checkpost was existing just next to the shrine and why were intelligence agencies not able to get wind of this pre-planned attack. KP IG did try to defend the police organisation by accusing the 92 police officials posted at Karak shrine checkpost for having “showed cowardice and negligence.” However, since KP police has proved its mettle during anti-terrorist operations, for its well-armed and trained rank and file to show “cowardice” on such a massive scale, and that too when required to deal with an unarmed mob somehow doesn’t sound very convincing.

In a renewed effort to conceal official apathy in safeguarding the Karak shrine, KP IG tried to convey to the court that the police had taken a very serious view of the “cowardice and negligence” exhibited by the police force at Karak checkpost, by saying that all the 92 police officials [including a superintendent and deputy superintendent of police] who were on duty at the time, had been suspended. However, this weak attempt to supress tacit organisational patronage being accorded by some organs of the state to clerics and organisations that promote communal hatred didn’t impress the CJP who rightly observed that “suspension [of policemen] was not enough.”

As policemen are responsible maintaining law and order, for them to be accused of “cowardice and negligence’ rightly attracts an extremely severe penalty. So, what remains to be seen is whether these 92 cops would be awarded exemplary punishment as laid down I law, or that just like in the past, they would quietly be reinstated once the furore dies down. Similarly, though 109 people have been arrested for their involvement in vandalising the religious shrine, the genuineness of Khan’s claim of treating minorities as “equal citizens” will only be established when those guilty of this loathsome act are convicted. But since there’s no record of anyone involved in the 1997 vandalism of this shrine being convicted, to expect anything to the contrary in the current incident would be nothing short of a miracle!

Despite its overreliance on bombast and obfuscation to wriggle out of this uncomfortable situation, the FO still needs to be complimented for truthfully summing up the official response to this incident by admitting that “orders were issued for repair of the temple, the highest level of judiciary took immediate notice, and senior political leadership condemned the incident.” But what merits attention here is that while the legislature should have rightfully discharged its constitutional responsibility of protecting fundamental rights of minorities, all the government did was to merely “condemned the incident.” It was the CJP who rose to the occasion by taking “immediate notice” of the vandalism and issued orders for repairs of the Karak shrine. He also displayed exceptional moral courage by admitting that this incident had caused “international embarrassment to Pakistan” -something that the prime minister of Pakistan should have done, but regrettably didn’t!

Khan has been very vocal in expressing grave concerns on what he believes to be official persecution of minorities in India and dreams big about creating a Pakistan that fulfils the vision of Qaid. So, devoting some time, energy and efforts to put his own house in order on the minority persecution   front will certainly do Khan a lot of good! After all, didn’t Jinnah assure the people in August 1947 that “You are free; you are free to go to your temples, you are free to go to your mosques or any other place of worship in the state of Pakistan. You may belong to any religion or caste or creed – that has nothing to do with the business of the state”?

So, it’s high time that Prime Minister Imran Khan sheds verbosity and grandiloquence and instead, walks his talk.