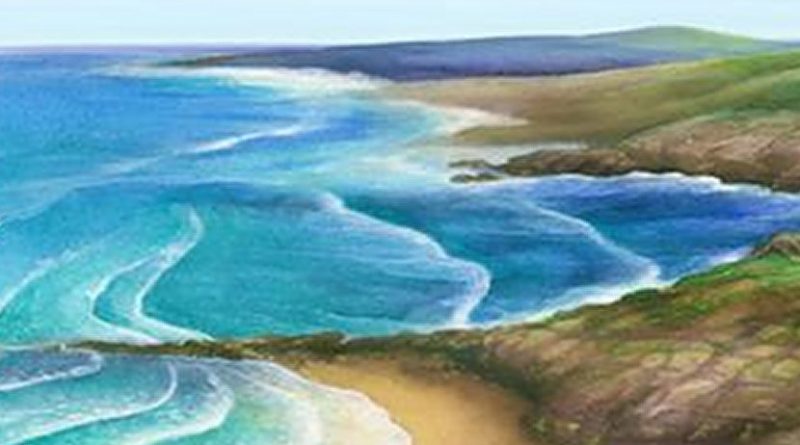 An artist's rendering of a coastal ocean landscape in the early Triassic world 250 million years ago. Credit: Hewe Duan

About 250 million years ago, when the Earth had no ice caps and the water around the equator was too hot for reptiles, sea level still rose and fell over time. Now, an international team of researchers has developed a way to track sea-level rise and fall and to tease out what caused the changes in the absence of ice sheets.

“Today’s models suggest .3 to 2.5 meters (1 to 8 feet) of sea-level rise during the 21st century, mainly due to ice sheet melting and thermal expansion,” said Mingsong Li, postdoctoral fellow in geoscience, Penn State. “However, we know that sea level fluctuated even during times when there were no ice sheets on Earth. The question is, what caused the fluctuation?”

The researchers reported in a recent issue of Nature Communications that the effects of the Earth’s tilt on the amounts of water in the oceans and in groundwater account for the changes in sea levels during this period, the Early Triassic.

The normal proxies that are used to indicate sea-level changes are heavily dependent on information obtained from ice sheets, but during a time when those ice sheets did not exist, other proxies were necessary.

The researchers looked at the sediments that form near the edges of where oceans were. If an area is near the ocean shore, the sea depth is fairly shallow. This shallowness causes mixing and disturbance of the sediments, including sea life, that create the layers of sedimentary rock the researchers examined. Tides, storms and other disturbances in shallow water will stir up the bottom, while further from shore, where the water is deeper, turbulence cannot reach the ocean floor, allowing sediment to settle undisturbed.

Researchers can date the sequences of sediment deposited on the ocean floor and, using this turbulence model, track the edges of the ocean, indicating sea-level rise.

While this research was done with sediments from South China, the sea levels during the Early Triassic behaved globally.

“The Earth’s tilt contributes to a polar temperature gradient,” said Li. “With a large tilt, more water is going into the atmosphere from the middle and higher latitudes. More rainfall is hitting the central continents and more water enters the groundwater.”

During this time, there were the oceans and a large central lake called the Germanic Basin. Evaluation of the area where this lake existed shows the expansion and contraction of this groundwater-linked body of surface water.

The researchers found that the wobble of the Earth Tilt has a periodicity of about 33,000 years, but that within that time span, there is another seesaw of wobble every 1.2 million years. If all of today’s groundwater became seawater, sea level would rise more than 1,000 feet.

Current estimates of sea-level rise by the Intergovernmental Panel on Climate Change consider only the effect of melting ice sheets, thermal expansion and anthropogenic intervention in water storage on land. Li believes that the balance between groundwater and seawater should be considered because the amounts of sea-level rise or fall that can occur due to a shift from groundwater to seawater could be large.

Li notes that about two-thirds of the world’s cities with over 5 million people each are located in low-lying coastal areas less than 30 feet above current sea level.