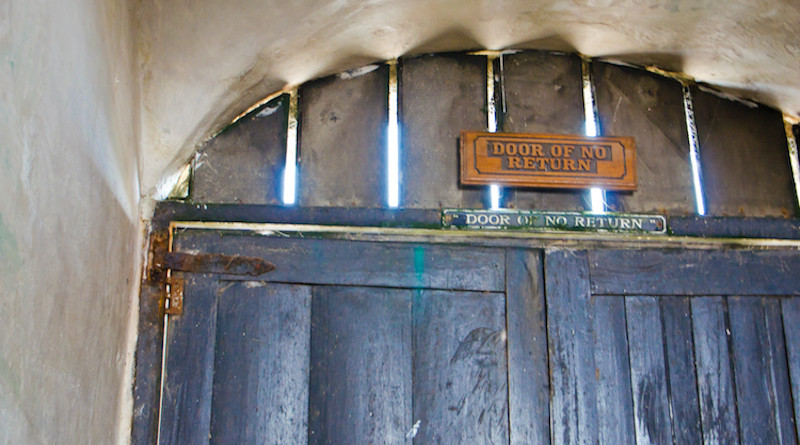 Cape Coast Castle's 'Door of No Return' that slaves would pass through right before they were put on ships to the Americas and elsewhere. Source: Wikimedia Commons.

As Americans explore the renaming of army bases, statues, streets, and schools that honour racist slave-holders or portray demeaning relationships between whites and Black, Brown and Latinx citizens,  similar efforts are underway in Senegal and Liberia most recently.

Goree, an island in Senegal linked closely with slave trade, has decided to rename one of its main squares in response to the anti-racist movements around the world.

According to a statement from authorities, the move is in solidarity with the Black Lives Matter protests that have spread across the world, denouncing recurrent racial violence targeted at the black community.

The 28-hectare island, situated two kilometres offshore from Dakar, was the largest slave-trading centre on the African coast between the 15th and 19th century, according to the UN’s cultural agency UNESCO.

Goree Island is also registered by UNESCO as a World Heritage centre and act as a “symbol of human exploitation.” Europe Square was inaugurated in 2003 by Mayor Augustin Senghor and the then President of the European Commission, Romano Prodi.

Mayor Augustin Senghor initially argued that street names should not be changed in order not to forget the pain and drama experienced on Goree Island – the “last stop of freedom” for many Africans in Senegal.

The Senegalese also want the statue of former colonial governor, Louis Faidherbe, to be removed. Faidherbe was governor of French Senegal in 1854–61 and 1863–65 and a major founder of France’s colonial empire in Africa. During Faidherbe’s tenure, his major accomplishment was to create a vast colony dominated by Europeans.

The date for the renaming has yet to be fixed as access to the island, a commune of Dakar, is currently restricted due to the coronavirus pandemic.

In a related development, an open letter by Sekou Keita, a “proud son of Nimba”, demands that Liberians consider the renaming Liberia’s capital, Monrovia, named for a staunch supporter of the movement to send Blacks to Africa.

He writes: “MONROE WAS A SLAVE OWNER! The task NOW is given to you to seek guidance from your Citizens to suggest a name that is both SYMBOLIC and HISTORICALLY relevant. If I may, DUCOR!” The full text may be found on the internet.