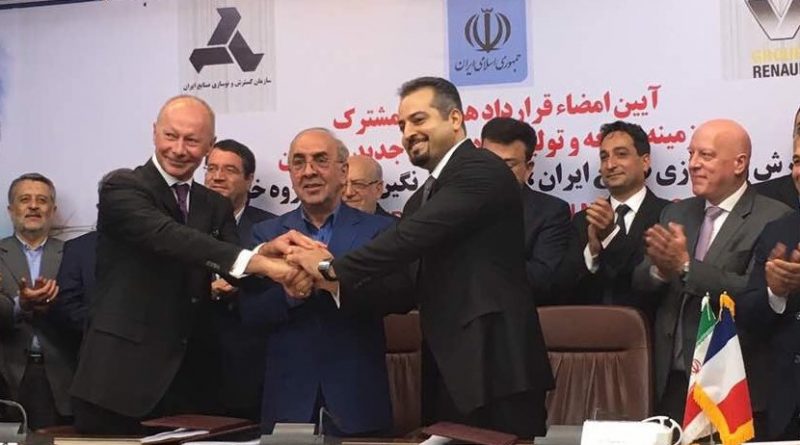 French carmaker Renault announced Monday that it has signed a joint venture agreement with the Industrial Development & Renovation Organization of Iran (IDRO) and Parto Negin Naseh Co, an importer of Renault products in Iran. Media is reporting that the deal could be worth around 660 million euros

The proposed joint venture company, of which Renault will be the majority shareholder, though with a first period of joint control with IDRO and Parto Negin Naseh Co, will include an engineering and purchasing center to support the development of local suppliers as well as a plant with an initial production capacity of 150,000 vehicles a year, supplementing Groupe Renault’s existing capacity of 200,000 vehicles a year in the country.

According to Renault, in first-half 2017, Groupe Renault sales in Iran doubled year-on-year, for a total 68,365 vehicles and a 9.7% market share.

The first vehicles to be produced at the plant will be new Symbol and new Duster.

In addition to the vehicle plant announced in September 2016, an engine plant is also planned with a capacity of 150,000 units a year.

The manufacturing facilities will be in Saveh, located 120 km from Tehran. They will be owned and operated by the joint venture company.

The agreements also provide for the development of an exclusive Renault distribution network, in addition to the existing network of NEGIN Khodro.

“We are happy to sign this agreement with IDRO and Parto Negin Naseh Co. In a rapidly expanding Iranian market, it was vital to implement plants, engineering and purchasing centre. This joint venture will enable an acceleration of our growth in this country” said Thierry Bollore, Member of Groupe Renault Executive Committee and Chief Competitive Officer.

“The development of a commercial network specific to our brand will reinforce Groupe Renault’s position in Iran. The signing of this new joint venture reinforces the strategic choices we have made in Iran and will open new perspectives in a 2 million vehicle market projected in 2020”, said Stefan Mueller, Member of Groupe Renault Executive Committee and Chief Performance Officer.

Entry into force and finalization of the transaction remains subject to a number of conditions precedents, including regulatory approvals, formation of the new company and preparation of the industrial assets for the project. The parties expect completion to take place on or around October 30, 2017.