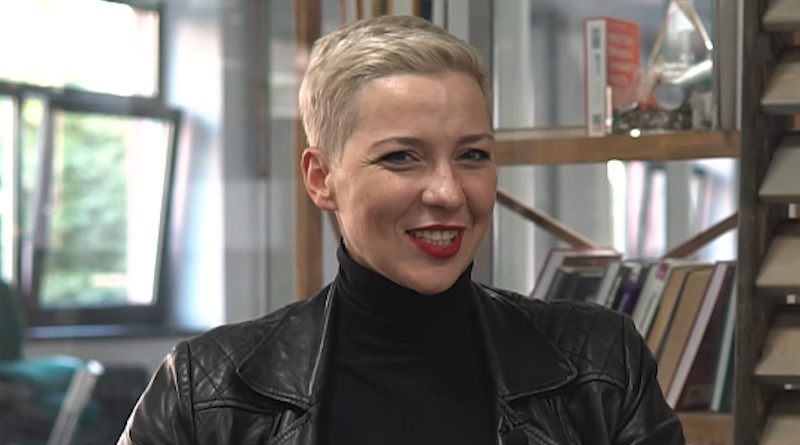 (RFE/RL) — Opponents of Belarusian President Alyaksandr Lukashenka are scrambling to locate one of their most influential leaders after a report suggested a member of the opposition Coordinating Council’s presidium was hustled away in a minivan by unidentified men early on the 30th day of anti-government protests.

The independent, Russian-language news portal Tut.by quoted an eyewitness as saying Maryya Kalesnikava was abruptly swept from the street in downtown Minsk on September 7 and taken into a vehicle, marked “Communication.”

The Belarusian Interior Ministry, its national Investigative Committee, and the State Control Committee have all said they have no information about Kalesnikava’s disappearance. Minsk police said they did not detain her.

The apparent abduction came one day after authorities acknowledged arresting more than 600 people at protests across the country over the weekend that attracted tens of thousands of people to pressure Lukashenka to resign following what they say was a rigged election last month.

Lukashenka, who has ruled the country for 26 years, has refused to hold talks with his opponents and rebuffed calls to hold a new election.

Meanwhile, the Coordinating Council said its press secretary, Anton Randyonkau, and its executive secretary, Ivan Kravtsov, had also disappeared. Police said they had no information on the alleged detentions.

“It’s obvious that these methods are illegal and cannot lead to anything else apart from an escalation in the situation in the country, deepening the crisis and fueling protests,” the council said in a statement.

The EU “expects the Belarusian authorities to ensure the immediate release of all detained on political grounds before and after the falsified 9 August presidential elections,” the bloc’s foreign policy chief Josep Borrell said.

“We strongly condemn the unabating arbitrary and unexplained arrests and detentions on political grounds in Belarus,” Borrell said, adding that the Belarusian authorities “continue to intimidate or allow intimidation of its citizens in an increasingly lawless way.”

Reuters has quoted three unnamed EU diplomats as saying the bloc will seek to impose economic sanctions on 31 senior Belarusian officials, including Interior Minister Yury Karayeu, by the middle of this month.

Initial approval without specifying who would be targeted, was given in August.

“We initially agreed on 14 names but many states felt that was not sufficient. We have now reached consensus on another 17,” one of the diplomatic sources told Reuters. “These are senior officials responsible for the election, for violence, and for the crackdown.”

British Foreign Secretary Dominic Raab said he was “seriously concerned for the welfare” of Kalesnikava.

German Foreign Minister Heiko Maas demanded “clarity on the whereabouts and the release of all political prisoners in Belarus.”

“The continued arrests and repression, including and in particular against members of the Coordination Council, are unacceptable,” Maas told the Bild daily.

Lukashenka’s leading opponent in the presidential election was political novice Svyatlana Tsikhanouskaya, who fled into exile in Lithuania days after the August 9 vote.

Reuters quoted her saying that Kalesnikava’s abduction looked like authorities were trying to stamp out protest momentum and intimidate the opposition.

“Instead of talking to the people of #Belarus, the outgoing leadership is trying cynically [to] eliminate [the opposition] one by one,” Linkevicius said. “The kidnapping of M.Kalesnikava in downtown of #Minsk is a disgrace. Stalinist NKVD methods are being applied in 21st century’s Europe. She must be released immediately.”

Tsikhanouskaya is scheduled to visit Warsaw this week to hold meetings with top Polish officials.

Belarusian officials say Lukashenka won a sixth presidential term with 80 percent of the vote, a number that democracy activists and Tsikhanouskaya dispute.

A spokesman for President Vladimir Putin said on September 7 that Lukashenka will visit Russia “within days.”

Dmitry Peskov reportedly told TASS that “preparations are in full swing,” adding, “Generally speaking, it [the visit] can be expected within days. We will inform you in due time.”

Moscow has responded coolly to Lukashenka’s appeals for Kremlin support since the protests erupted.

Russia has powerful economic and political leverage in Belarus through subsidized oil and gas shipments, although a two-decade-old agreement on a union state exists mainly on paper.

Authorities in Belarus said on September 7 that they detained some 633 protesters as tens of thousands marched in the capital and other cities the previous day as part of the continuing opposition-led effort to pressure Lukashenka to leave.

Ahead of the September 6 protests, Lukashenka’s security services warned of a crackdown against those who decided to participate in the unsanctioned demonstration in the capital.

Aside from Minsk, demonstrators gathered in Brest, Baranavichy, and the western city of Hrodna, to the east in Mahilyou, and in the southern city of Homel.

Opposition groups are also calling for the release of political prisoners and for an independent investigation of the police crackdown that swept up thousands in the days after the vote.

Tsikhanouskaya, who ran for president after her husband was jailed following his announcement he would run, said on September 5 that her country was in a “deep political crisis.”

Demonstrators in Minsk were chanting, “Long live Belarus!” and, “Shame!” and carrying red-and-white flags and banners, a symbol of the opposition that has been banned by the authorities, at the September 6 event.

Police later dispersed protesters with the help of tear gas and roundups.

In addition to thousands of detentions, Belarusian authorities have silenced local journalists and expelled foreign journalists, and have prosecuted many opposition leaders for what they have alleged are threats against the Belarusian order.