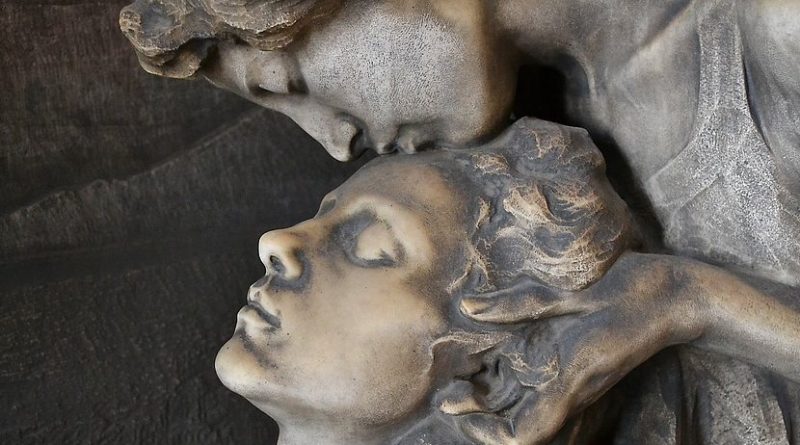 The tension and conflict between the United States and China that has lately become visible with war on tariffs, trade, and intellectual property will go a long way before it can be resolved in some form. The confrontation is not really about China’s economic gains or financial profit through unfair trade practice with the United States, or about China’s illegitimate acquisition of U.S. intellectual property. The battle is about how we can reshape our civilization for the next 100 years and which path humanity should take. It is a decision that humanity must make at this juncture. It is an effort to bring awakening to humanity and to change course for a better future.

China does not want change from its one party-ruled fascism, which has enabled its military sector and the ruling power elite to gobble the nation’s entire wealth under the state-run economic system. A nation being populated by more than one billion people and wielding economic power on the world stage should take responsibility for our civilization and should have a vision for the future of humanity.

However, China has instead strengthened its fascist ruling under Xi Jining’s leadership, who recently amended the Communist Party’s decree and paved the way for permanent dictatorship with no term limit. China has pursued its aggressive agenda for world domination relentlessly under Xi’s leadership, which has been materialized by its recent political and military undertakings: (a) the building of a modern-time silk road for energy supplies that would encircle the Middle East, Europe, Central Asia, and South Asia over the land and the seas, which China officially calls the One-Belt-One-Road Project; (b) the construction in South China Sea of artificial islands and military bases with missile units, which not only irreversibly destroyed huge coral reefs and priceless maritime environments, but increased military aggression against the sovereignty of its neighboring countries; (c) giving North Korea advanced nuclear materials and ballistic missile technology and keeping the rogue regime as China’s nuclear-armed handyman, which brought about Kim Jong Un’s uncontrollable missile tests and appalling nuclear threats to the United States and the West in 2017; the list goes on.

Moreover, domestically China has built numerous internment camps and imprisoned more than a million Uyghurs in Xinjiang in the name of “re-education,” who are an ethnic minority living in China’s far west autonomous region. The international community views it as an attempt for ethnic cleansing much beyond human rights abuse. What legitimate account can Xi Jinping offer for this mass incarceration? How does that differ from Nazi Germany’s oppression of Jews in the concentration camps?

In South Korea, as Gordon Chang said, ideological fanatics and their zombies, who call themselves a “candlelight generation,” are running amok in every government office, from President Moon to the Supreme Court justices to countless representatives in the National Assembly to numerous generals in the military. Lim Jong Seok, Moon’s chief of staff has a criminal record and served a jail term on treason charges; Suh Hoon, director of the national intelligence agency of South Korea lived two years in North Korea having a tie with the North Korean elite. Where are they taking South Korea with them?

All that these fanatics and criminals want is to deny the legacy of South Korea as a free and democratic country and instead subject South Korea to the rule of North Korea’s Kim regime, which they think is the legitimate successor of the Chosen Dynasty that ruled the Korean peninsula for 500 years as a monarchy before Korea’s surrender to Japan in 1910. In a nutshell, South Korea was hijacked by a pack of well-planned traitors in a political coup after illegal impeachment of the sitting South Korean president in early 2017. The rest is what the world has witnessed: systematic enslavement of the free and democratic country under the rogue one-party regime of North Korea, in the name of “peace and prosperity of one Korea.”

No doubt these South Korean traitors and fanatics are loyal cells and agents who have diligently carried out Xi Jinping’s delusional agenda for world domination. Should the hijacking have occurred during the Obama administration, South Korea would have become another helpless Communist satellite state under the rule of China and North Korea. Fortunately, the timing of this hijacking was not right. It occurred when the United States was determined to reshape the world order for a better future of humanity.

As the U.S. confrontation with China grows stronger and becomes more intense, its energy buildup must find a place for pressure relief before explosion. That place is North Korea. The United States and the West cannot allow China-led multinational fascist alliance in the region since it will pose a grave threat to humanity. North Korea’s fate is sealed. South Korea’s Moon Jae In added fuel to the flames, and the flames will only engulf the two Koreas faster.

At the Singapore summit in June, North Korean dictator Kim promised U.S. President Trump to fulfil his vows for denuclearization. In October U.S. Secretary of State Mike Pompeo visited Pyongyang, but Kim refused to give a list of North Korea’s nuclear stockpiles. Why did Kim balk? U.S. National Security Advisor John Bolton pointed out that North Korea’s rapid development of nuclear and ballistic missile capabilities to hit the United States was made possible by technical and material assistance from China’s Xi Jinping. North Korean-made ballistic missiles and nuclear warheads all have Chinese-made parts, and the vehicles and equipment used to mobilize them were manufactured and supplied by China. Thus, Kim could not disclose them to the U.S. officials without permission from China’s Xi. Kim is little more than a puppet of Xi’s.

Kim should better remember the short video clip that President Trump showed him at the summit and its message: A move forward for a prosperous and glorious future, or a fallback to a paleontological past is your choice.

What choice does Kim Jong Un have now? I don’t think he has any choice. Betrayal of China’s dictator Xi would mean death to him, and Kim knows it. Breaking the promise he made personally to President Trump at the summit would mean death to him, too, and Kim knows it well. All Kim can do is delay denuclearization indefinitely, earn his time through empty words, and pray for another ride in his new Rolls Royce Phantom.

Can Kim play Trump? No. Will Kim have enough revenue to manage his regime? No. That is why Kim sent his South Korean delegate, President Moon to Pope Francis in Vatican, then to EU leaders—French President Macron and German Chancellor Merkel. South Korea’s sitting president begged these world leaders to lift the United Nations sanctions on North Korea and asked them to save North Korea’s dictator from falling into a bottomless pit. Mr. “Waning-Crescent” Moon came home only with mocking laughter behind him. I admire the South Koreans since they elected an empty-headed man to be their president.

History tells us that leaders who have kept their hands bloody for power cannot open the door to democracy and free markets, because of the fear of reprisal and revolts. Dictators are unable to change the systems they have built, until their last days in the office. Deng Xiaoping could embrace open policy for China because he climbed to power with clean hands. But Kim Jong Un cannot open North Korea to the outside world; he has put too many political rivals to death, including his uncle and half-brother. Xi Jinping is driving China off the cliff. Unfortunately, Xi is unable to change the system he has built for power, out of fear for retaliation. Only the people of China can save the fate of China from falling back to the dark age of the Cultural Revolution and the abject poverty the country saw.

Home » The Kiss Of Death: The Political Future Of Northeast Asia – OpEd