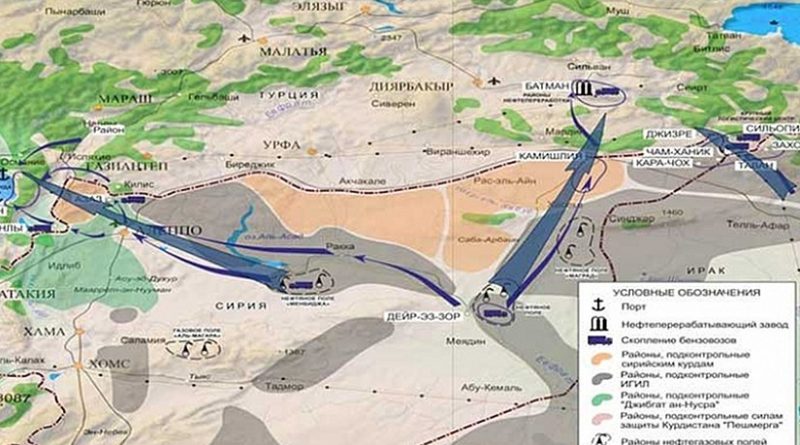 The routes of alleged oil smuggling from Syria and Iraq to Turkey. Graphic provided via Modern Diplomacy.

According to what has been disclosed by Russian sources, the fact that Turkey smuggles – on a large scale – oil coming from the Caliphate is – if not certain – highly likely.

Al-Baghdadi’s networks have always used the transport routes near the Turkish border where the hydrocarbons – often coming from the Kurdish areas of Kirkuk or Sulemaianiyah – are traded by a network of brokers and intermediaries of various ethnic origins.

Furthermore the main oil pipelines are out of order and are also well-known to the Russian, Syrian and Coalition’s air forces.

Some sources say that there are also Western oil companies eager for buying Caliphate’s oil, but it is more likely for the oil of those areas to be admixed or shifted so as to make it impossible to detect and recognize its origin.

In fact, on December 2, 2015, the Russian Defence Ministry showed pictures, photos and documents largely proving – according to the Russian political line and storytelling – that there is a “widespread system of oil smuggling between Turkey and the Isis/Daesh’s territories in Syria and Iraq.

The oil is transported in trucks – tens and hundreds of means – up to the Turkish territory where it is sent to the various refineries.

According to Russian sources, the amount is 200,000 oil barrels per day, slightly less than the total of oil extracted by the Syrian government alone until the outbreak of the Syrian-Iraqi jihad.

According to Russian official sources, Russia hit 32 extraction facilities, 11 refineries, 23 pumping stations and as well as 1,080 trucks for oil transport.

Hence Turkey is being targeted, regardless of Russian allegations being true or not.

The problem lies in the fact that Turkey is the second NATO armed force, after the United States, and certainly one of Russian goals is to annihilate the Atlantic Alliance’s presence in the Greater Middle East.

However, there is a linkage between the Russian operations against Turkey following the shooting down of the Sukhoi-24 aircraft and the NATO enlargement recently proposed.

Montenegro – and probably Croatia, at a later stage – are supposed to become members of the Atlantic Alliance.

This would mean Balkans closed to the Russian influence and strengthening of the Atlantic lines so as to protect Ukraine to the bitter end.

Nevertheless, this is a condition that Russia will never accept.

Hence, if Russia strengthens its already significant ties with the Kurds, this will bring grist to the Daesh/Isis’ mill, because it would create other masses of refugees who would increase the blackmail power already shown by Turkey towards the weak and inept European Union, while Great Britain has already carried out four bombing missions against the Caliphate’s positions with its Tornado aircrafts.

The Caliphate does not seem to suffer much these air raids and attacks: ISIS has learned Hamas’ lesson and lives underground for the time needed to prevent the collateral damage of fighters flying over its skies.

In addition, there is a well-grounded reason to believe that the Caliphate’s expansion may lead the Al Baghdadi’s group to have chemical weapons – already partially owned by Isis and coming from Syrian and Iraqi arsenals – but, in particular, to have the fighter aircrafts available to the old Gaddafi’s regime. Moreover, with a view to controlling the Syrian area, the Russian fleet in the Black Sea must necessarily cross the seas controlled by Turkey.

Hence Turkey is becoming essential for NATO survival in the Middle East and the price paid by the other allies will inevitably be very high.

Also the old alliance – now deprived of strategic content – between Turkey and Israel will collapse, because the Jewish State now coordinates all its air and military operations with the Russian Federation.

Meanwhile, following the recent elections of November 1, 2015, the new government was formed: it is a single-party government dominated by President Erdogan’s party, namely the AKP.

It includes Ahmed Davutoglu, the Prime Minister and architect of the recent Turkish foreign policy, with Mehmed Cavusoglu as Minister for Foreign Affairs and Volkan Bozkir in charge of relations with the European Union.

Cavusolglu had already been the Turkish Minister for Foreign Affairs from August 2014 to August 2015, as well as vice-President of the Assembly of the Council of Europe, and is known for having prevented – with his accomplices – the election of his competitor in Antalya, on March 30, 2014.

Volkan Bozkir is a career diplomat, and he is the Head of the Delegation for Turkey’s accession to the European Union.

Hence Turkey is seeking the EU support as a starting point for its autonomous and independent project of power projection into Central Asia.

If the European Union accepts this course of action, it will lose Mesopotamia and the agreements with Russia, which also supplies over 50% of the oil and gas used by Turkey. Conversely, if Turkey’s accession to the European Union does not materialize, Turkey will do its utmost to make life hard for the Eurasian peninsula.

He is a lawyer by profession and he was former deputy-Prime Minister in 2013, pending the large corruption scandal in the Turkish government.

He had been Undersecretary to the Presidency of the Council of Ministers from 2007 to 2013.

In all likelihood, he is the strong man of the AKP regime and the spearhead against the Kurdish insurgency.

Ibrahim Yldirim is the Transport Minister, who has the task of expanding the Turkish large infrastructure, and particularly the route from Beijing to London, which would give to Turkey an extraordinary power vis-à-vis the European Union and Mesopotamia itself. He is a man who had been involved in the great scandal of 2003, but his unshaken loyalty to President Erdogan is the reason for his comeback.

Mehmet Simsck, who was appointed Economy Minister, is a Kurdish-Turk and was former Prime Minister of the Turkish Republic and Finance Minister from 2009 to 2015.

He, too, comes from Batman and he is an expert of the economy of emerging countries and Europe with the Middle East. He also worked for Merrill Lynch in London, as well as for the German Deutsche-Bender Securities from 1998 to 2000. He had also worked for UBS Securities in New York in 1997.

Hence he is a neoliberal technocrat.

Albayrak was CEO of Calik Holding, which deals with textiles, energy, construction, finance, logistics and media. He is the cashier and treasurer of President Erdogan’s family.

He studied at the London School of Business and at Pace University in New York.

He represented Calik in the United States.

In short, a government of technocrats linked to an entourage of super loyal aides to the President.

About the author:
*Professor Giancarlo Elia Valori is an eminent Italian economist and businessman. He holds prestigious academic distinctions and national orders. Mr Valori has lectured on international affairs and economics at the world’s leading universities such as Peking University, the Hebrew University of Jerusalem and the Yeshiva University in New York.

In 1992 he was appointed Officier de la Légion d’Honneur de la République Francaise, with this motivation: “A man who can see across borders to understand the world” and in 2002 he received the title of “Honorable” of the Académie des Sciences de l’Institut de France.

Home » Turkey And The Smuggling Of Islamic State Oil – Analysis