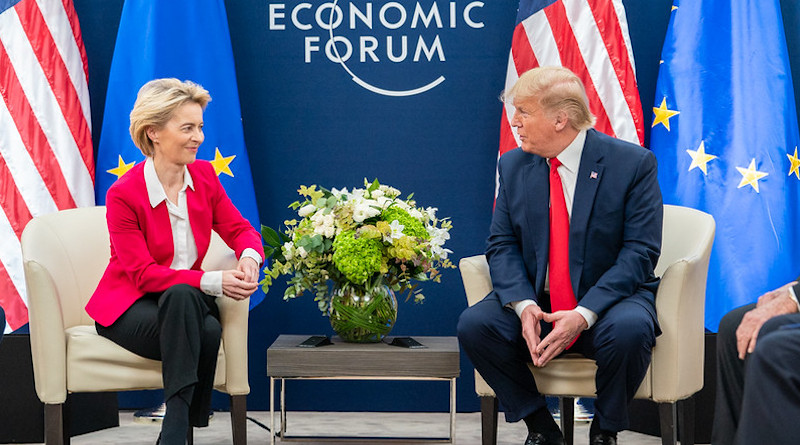 A group of EU member states are unhappy about the lack of information from the European Commission on the trade talks with the US and have expressed their “nervousness” about what could be in the deal, various diplomats and European officials told EURACTIV.

When Commission President Ursula von der Leyen met with US President Donald Trump in Davos (Switzerland) in late January, she said she would travel to Washington soon and both sides would reach an agreement to settle the trade dispute “in a few weeks”.

Von der Leyen was expected to travel on Thursday and Friday (6-7 February). But instead, she sent her Trade Commissioner Phil Hogan and the High Representative for Foreign Affairs and Security, Josep Borrell, to talk to the Trump administration.

But diplomats complained that the Commission chief was not keeping member states in the loop about her plans or what she would offer to Trump.

“Everybody is very nervous, nobody knows what the Commission will do”, one diplomat said, on condition of anonymity.

The diplomat added that the feeling was that the first priority for von der Leyen, who used to be Germany’s defence minister, was to protect the German interests and its powerful car industry by avoiding further tariffs.

Trump said he had told von der Leyen in Davos that “‘if we don’t get something, I’m going to have to take action and the action will be very high tariffs on their cars and on other things that come into our country,”

Another EU diplomat sought to downplay other member states’ concerns, saying “we would have shared them, had we not been so confident in the Commission’s ability to handle this trade talks”.

The same diplomat added that “Germany is very concerned” about the possible tariffs. But based on how von der Leyen acted in her first months, “we are confident in her ability to put her specific nationality at a distance”.

A Commission official contacted by EURACTIV recalled that the negotiating mandate given by the member states last spring was “very clear”.

National governments authorised the Commission to negotiate with the US on the conformity assessment needed in some sectors to facilitate trade exchanges, and on the elimination of tariffs on industrial goods.

After meeting with Trump, von der Leyen said she was convinced the two sides could engage in a positive agenda on trade, technology, energy “and much more besides”.

A third EU diplomat cautioned that although the Commission was trusted to defend the interests of the EU as a whole, they would remain “vigilant”, in particular to certain aspects in the field of agriculture.

One of the diplomats consulted explained that the Commission has “a lot of margin” to manoeuvre within the mandate, in particular by easing sanitary and phytosanitary (SPS) measures that could facilitate the import of American agrifood products.

The diplomat said that lifting the ban on the import of chlorinated chicken to the EU, a longstanding demand by Washington, could fall within the scope of this facilitation.

A senior EU official said that tweaking the SPS measures could represent a “backdoor” to overcome the stalemate the EU-US negotiations hit last autumn over the inclusion of agriculture, a red line for the Europeans.

But diplomats are sceptical about the possibility of reaching a deal with the US without a new mandate that would include agricultural products.

According to US Secretary of Agriculture, Sonny Perdue, changes to the regulatory barriers would not be sufficient as their goal is to balance America’s $12 billion agricultural trade deficit with the EU.

The risks of new tariffs hitting the car industry came on top of other parallel disputes between the EU and the US.

In addition, Washington was considering increasing from 25% to 100% the tariffs imposed on European agrifood products from Germany, France, the UK and Spain, as part of the Airbus compensatory tariffs authorised by the World Trade Organisation.

Meanwhile, some member states are preparing to bring their demands directly to the US administration.

Spanish ministers of foreign affairs and trade, Arancha González and Reyes Maroto, will travel to the US in the coming days.

Maroto has previously expressed her concerns to Hogan about the potential tariff increase in the agrifood sector, which Madrid sees as “unfair” for Spanish farmers, who are currently protesting at home over their falling benefits.

Spanish officials recalled that Madrid does not have a trade surplus with US in goods, and had only minority participation (under 5%) in the making of Airbus airplanes.

In addition, Spain was the first member state hit by the Trump tariffs, when he imposed duties on black olives.

The Spanish government will also remind the US Administration of the ongoing military cooperation between the two countries. Spain hosts a US Naval base in Rota (Cadiz), important for their operations in the Mediterranean.