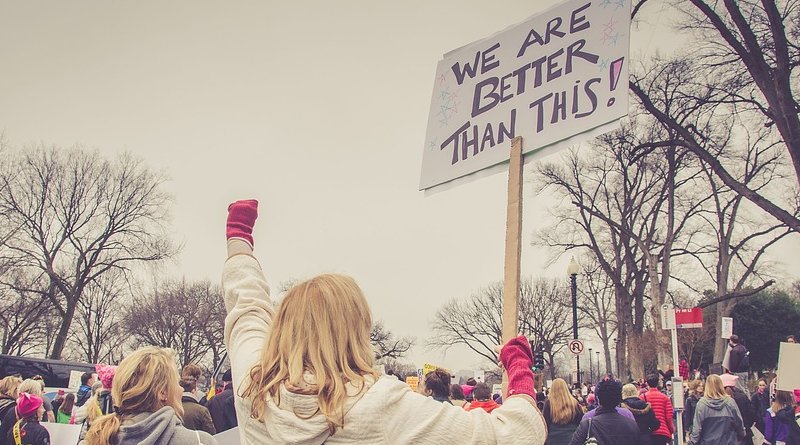 It is almost as if we today face an impossible trinity: liberalism, democracy, and freedom. Once these three were assumed to march together, yet today they pull in different directions.

The grands boulevards of Paris, occupied intermittently of late by protestors in yellow vests, are themselves a testament to the power of the crowd. When Emperor Napoleon III had his capital remodelled by Baron Haussmann, the narrow alleyways of the medieval city, birthplace of revolutions, were replaced by broad avenues that — legend has it — were designed with cavalry charges and artillery in mind. The power of the Paris mob was a thing to fear, and Napoleon III had no intention of letting them push him off his throne, as they had three French rulers before him.

Rulers fear the street. One might be tempted to add ‘for unelected autocrats in particular,’ except that is not true. Certainly not today, when democratically elected governments around the world face angry protests organised and enthused by social media. In fact, street power is as old as civilisation: cities have streets, and streets attract protest. Street power has destabilised republican governments as often as it has toppled autocrats — if anything, the power of the mob was first sharpened and used by populists in Ancient Rome, from the brothers Gracchi onwards. The Roman Republic did not survive the populists of the street; will today’s republics do much better?

Liberal democracy depends upon, and guarantees, certain basic freedoms, including the freedom of assembly. Citizens must be able to gather together— to demonstrate, to protest, and to demand. But this particular moment of history has given this freedom a special potency. Discontent, radicalisation, polarisation, and radicalisation alike spread with greater ease through social media networks which create echo chambers and flatten nuance. Even governments that pride themselves on their understanding of political processes and public opinion can find themselves wrong-footed, stunned by the speed at which a single incident or policy change can spark a blazing protest movement. India’s government, for example, must have felt secure after two massive electoral victories, but appears quite unprepared for the fury on the streets following its amendment of citizenship law.

It is almost as if we today face an impossible trinity: liberalism, democracy, and freedom. Once these three were assumed to march together — without free association, are not both liberalism and democracy meaningless? — yet today they pull in different directions. Liberal checks on democracy reduce the speed at which decisions can be taken, allow political and minority groups some veto power, and protect certain individual and collective rights. But this allows populist leaders, who promise to override such vetoes and erode such rights, to ride the anger of the street power. Illiberal and “managed” democracies themselves, however, may not find things easygoing — for social media allows angry minority groups to organise ever better, and indeed in some places and times to enhance their power. That is what the Parisian mob was always about, after all — the French Revolution was an urban phenomenon. Similarly, populists today in Europe, Asia, and America who depend upon rural and peri-urban votes often find themselves facing angry urban protests. Donald Trump in the United States faced public resistance to his “Muslim ban”; Polish cities rallied against Law and Justice’s controversial judicial reforms; and both Andrej Babis in the Czech Republic and Viktor Orbán in Hungary faced in their cities the largest street protests since the fall of Communism.

Two competing delusions are at work in today’s face-offs between street protestors and powerful politicians. The first is the belief that executive power, even in liberal democracies, should have fewer checks. As some humorist in the distant past put it, the problem with some politicians is that they forget they have been appointed and start thinking they have been anointed. Similarly, an electoral mandate and the self-reinforcing narratives of social media can cause leaders to believe that their own decisions represent the sovereign will. Modern republican and constitutional monarchy evolved precisely in order to constrain such delusions contained in heads that wore a crown. But those sovereign-constraining institutions have proved fragile when they are faced with leaders who wield “the will of the people” with as much fervour as their predecessor did “divine right.” From their point of view, street protestors are at best bad losers and at worst traitors, seeking to subvert either the electoral process or the nation-state itself. Many accuse them of being in league with the nation-state’s enemies — Babis blamed the EU for trying to subvert his rule, Orban’s regime imagines George Soros is behind the anger, and so on.

The second delusion is no less dangerous. It is the belief, held by many on the street, that through protest itself they can de-legitimise an elected government. To organise in defence of a principle, or against a particular action is one thing; to seek to render a duly constituted government powerless or force it out of office is quite another. Yet in sharply divided societies the latter can be the explicit or implicit aim of some protests. In this analysis one must exclude, of course, those courageous individuals who gather together to defy openly illiberal or oligarchic systems — there is no way that the government of Hong Kong, for example, can be considered truly “elected.” Those protestors already know their government lacks legitimacy; they seek, through their demonstrations, to express their own identity and to force its recognition by Beijing and the world. The drafter of India’s Constitution, B. R. Ambedkar, in a famous speech to the Constituent Assembly said: “When there was no way left for constitutional methods for achieving economic and social objectives, there was a great deal of justification for unconstitutional methods. But where constitutional methods are open, there can be no justification for these unconstitutional methods. These methods are nothing but the Grammar of Anarchy and the sooner they are abandoned, the better for us.” Ambedkar was drawing a clear distinction between public protests against an illiberal government, and those against a constitutional one. In today’s environment, one might go further and add the third category: protests against the dilution or abandonment of constitutional principles.

These two delusions can feed off and reinforce each other, creating a situation in which an elected government and those who did not vote for it are permanently at odds, fed by a climate of political polarisation. Such polarisation is not necessarily a sign that democracy is not working. It is in fact the opposite: an indication that it is working too efficiently. In an information-rich environment, political entrepreneurs are better able to calculate exactly what wedge issues will harden their base and bring them closer to victory; they can determine exactly how much financial and political capital must be spent where, in order to maximise its effect. Thus, elections can simultaneously be much closer and more bitter than they were earlier. Meanwhile, the political activists who make up the essential support base of any political party remain constantly informed of any deviations from their preferred principles by their elected representatives; and so increasingly stringent standards for ideological purity are imposed, rendering consensus and compromise that is the requirement for a functional democracy ever more difficult. Both Republican and Democratic parties in the United States, as well as social democratic parties in Europe, have slowly lost their moderate wings to such purity tests. An inability to compromise at the highest level means in turn that partisans have more of an impetus to take to the streets; and so the cycle continues.

At a very basic level, the relationship between citizens and the state is in danger of breaking down in this spiral of mutual challenge. Even democratic polities are now responsive to the most ideologically fervent members of whoever happens to be the ruling coalition at that point, and in order to push through maximalist policies will delegitimise protests and protestors. Breaking out of this cycle will require exceptionally generous and courageous leadership. But a time of strong leaders is paradoxically one where courageous leadership is sadly uncommon.