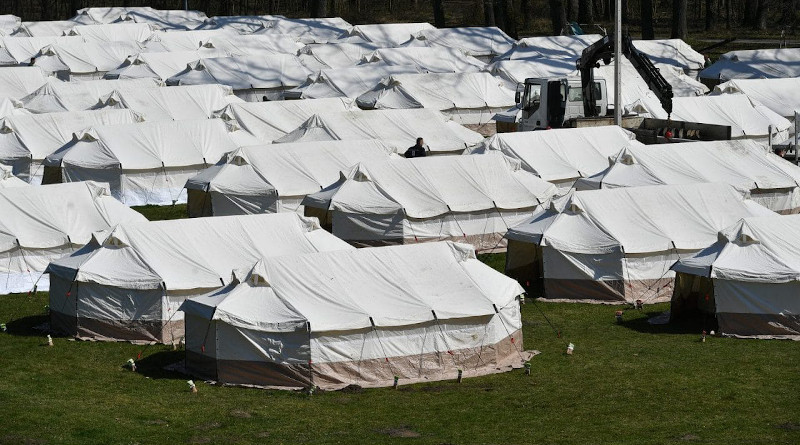 Hundreds of people have been detained for violating coronavirus self-isolation measures after arriving in Serbia, but many claim that they were not properly notified about their obligations amid confusion about rapidly-changing government announcements.

Serbian police have filed charges against more than 600 people for violating self-isolation measures after arriving in the country, and sent the offenders to specially-built detention facilities in three different cities. Around 120 people are currently in detention.

The measures imposed by the authorities to curb the spread of COVID-19 have been tightened up several times since they were first imposed in mid-March. The changes have been announced at special press conferences, usually in the evening, and then published in the Official Gazette, often with slight alterations.

Media have been quoting official statements from the press conferences immediately, then reporting on what was amended the day afterwards.

All of this has caused confusion, especially among people who entered the country a couple of days before the state of emergency was declared, and who have claimed that they were not informed of the rules they should obey.

Some people who entered Serbia before the state of emergency came into force were subsequently detained.

BIRN’s fact-check shows that the confusion was initiated by unclear messages from state officials amid the rapid development of events on the ground.

BIRN analysed the Serbian government’s Decision to Declare COVID-19 Caused by SARS-CoV-2 an Infectious Disease, which is the only official decree that regulates the issue, as well as all the amendments to the decision and the way it was actually implemented.

The government officially declared COVID-19 an infectious disease on March 10 and decided that restrictive measures could be applied. In the first couple of days after this, these measures were mostly imposed on foreign citizens and were applicable to Italy, Iran, Hubei province in China, Daegu and North Gyeongsang provinces in South Korea and Ticino canton in Switzerland.

On the evening of March 14, the government imposed more restrictive measures. To the list of ‘hotspot countries’ were added Spain, Germany, France, Austria, Greece and Slovenia. This took the total to 11 countries. Foreign citizens coming from these countries or regions were banned from entering Serbia.

For Serbian citizens returning from these 11 countries or regions, the state ordered “isolation in home conditions” – self-isolation – for 14 days. Media and official websites published this information widely.

But in practice, people who entered Serbia during the day on March 14 from ‘hotspot countries’ were, as in previous days, urged to notify officials at the border if they had any symptoms and were given a flyer with the recommendation to reduce contacts with other people in their household, workplace or public places for next 14 days and to call the nearest epidemiologist if they developed any symptoms of the virus. Obligatory isolation still was not mentioned.

Twenty-four hours later, Serbia imposed a state of emergency, all foreign citizens were forbidden to enter the country, and a major change was introduced for Serbian citizens.

Serbian citizens returning from the ‘hotspots’ were obliged to self-isolate in their homes for 28 days and those coming from other, non-‘hotspot’ countries had to do the same for 14 days.

People who entered Serbia in the following days, and according to state representatives there were thousands of them, were given a signed official order to self-isolate.

Police started to check up on them, calling them on their landlines and knocking on their doors. Police director Vladimir Rebic told TV Pink on March 17 that there were 8,000 people in self-isolation at that point.

On March 18, the state announced that a health or sanitary inspector can also give a verbal self-isolation order, and that a written version can also be requested.

The examples of some of the people who have been detained so far for violating self-isolation measures show that the main element of confusion surrounds people who entered the country around March 14, because it is not clear when exactly the self-isolation order came into force.

Lawyer Milena Vasic from the Lawyers’ Committee for Human Rights, YUCOM, said that the measures are not being applied retroactively and only apply “from the entry into force of the decision itself”.

Vasic argued that the problem arose from the way that people were informed when they arrived in Serbia.

“Many citizens claim that they received only a warning and not a verbal decision [order], and this is indeed a systemic problem – many citizens were given a measure of detention for not respecting a measure of self-isolation about which they were not adequately informed,” she said.

“To our knowledge, this [situation] lasted for about a week, and subsequently the state authorities themselves noticed this omission and started issuing verbal decisions in such a way that they really informed citizens that they were obliged to adhere to self-isolation measures,” she added.

Verbal orders started to be given on March 18, which also caused confusion among people returning to Serbia.

Vladica Ilic from the Belgrade Centre for Human Rights agreed that the method of informing people they had to go into self-isolation was problematic.

Ilic said some people claimed that they were not told about the measure on arrival and then “learned about it after about ten days from police” when officers called to check that they were self-isolating.

Ilic explained that, according to Serbian law, people in such a situation can be given a verbal order to self-isolate, but it must later be followed by a written one, although “the right to receive a written amendment of the verbal decision is suspended until termination of the state of emergency”.

“Citizens upon whom this measure is imposed must also be informed about to whom, within what time limit and in what manner they can file an appeal, which is a right guaranteed by the constitution,” Ilic explained.

On March 19, Defence Minister Aleksandar Vulin told media that the army has set up tents in three military facilities as temporary accommodation for people ordered into quarantine.

Vulin explained that the tents would be used to accommodate Serbian citizens arriving from the so-called coronavirus ‘hotspots’ who do not have a registered address in the country.

The same day, Serbia closed all its borders, and those arriving from the so-called ‘hotspots’ who previously would have had to self-isolate at home for 28 days were now obliged to enter quarantine in one of the military facilities for 28 days.

Although Vulin said the tents would be used for Serbian citizens who do not have a registered address, the government’s decision actually said that all arrivals from the so-called ‘hotspots’ were now obliged to be quarantined there.

However, no information has yet been made public about who is being housed in the new quarantine facilities.

Confusion continued, because in parallel with detaining people who had already entered Serbia, new groups of people started to arrive in the country – students studying abroad, patients and workers who had lost jobs and who were stuck in airports or cities abroad until the government sent planes to repatriate them.

These new arrivals were automatically transferred to quarantine facilities such as student dormitories, and some were settled in former reception centres for migrants and refugees. Some of them claimed they were not told where they were being taken or what was going to happen to them.

On March 21, the state extended home isolation measures to 28 days for all people entering Serbia from the so-called ‘hotspots’.

On March 26, references to specific ‘hotspots’ like Italy and Iran were removed, and the measures were now said to apply to people arriving from undefined coronavirus ‘hotspots’ in general. It also became possible for arrivals to be accommodated in other facilities as well as the military tents.

From the beginning of April, all people who arrive in Serbia from abroad must self-isolate for 28 days, and for those whose 14 days of self-isolation would have expired by the end of March, the measure has been extended for another two weeks.

According to the latest data published on the state’s official COVID-19 website, on April 5 there were 74,694 people in self-isolation in Serbia.

Home » BIRN Fact-Check: When Did Serbia Order All Arrivals To Self-Isolate?