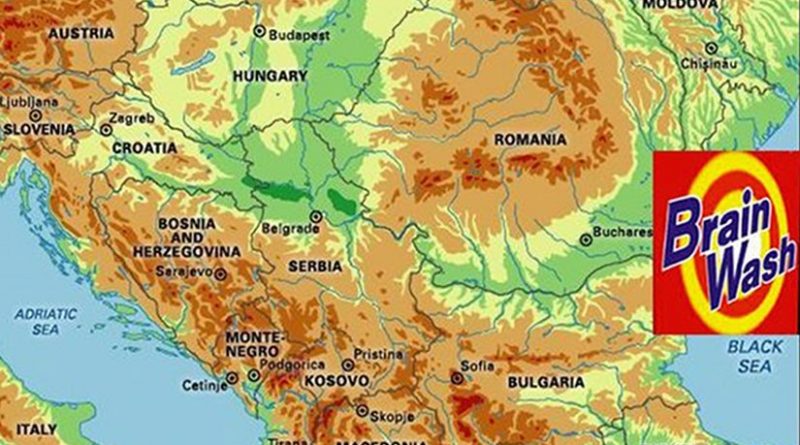 We continue with the third part of analyzing Media (il)literacy within South-East Europe, having in mind that having an illiterate media-type people within the area is a blessing for the politicians.

People usually say, “Trust them, without doubt,” when referring to the  content of the news on any News channel in Bosnia and Herzegovina, Croatia, Serbia, Montenegro, Kosovo*, and Macedonia…


2. The gradual strategy (by Noam Chomsky)

“Acceptance to an unacceptable degree, just apply it gradually, dropper, for consecutive years. That is how the radically new socioeconomic conditions (neoliberalism ) were imposed during the 1980s and 1990s: the minimal state, privatization, precariousness, flexibility, massive unemployment, wages, and do not guarantee a decent income, so many changes that have brought about a revolution if they had been applied once.”

Croatia: Transition is something that is unavoidable within the past twenty years, but the “transition” is in the way how former communists and current capitalists (but also the newest nationalistic tycoons) thought it should be: a cheap buy off during privatization of the former big trade and production companies, merging them within consortiums, and the “killing” (i.e. even buying them and linking them to the existing clusters) of small companies through the damping of prices for the goods presented within the market. It has to happen, they have said – politicians, because that is the future. Slowly, we will develop, they were saying in the 1990s (XX Century). Currently, in the second decade of XXI century, Croatia has an unemployed rate of 16,.7 % and is among most undeveloped countries of the European Union. Transition has killed a future over there. Is there a light at the end of tunnel? Maybe, through lustration, but is it too late?

Is the Media in on it? Just under the control of the ones who have the money and pay to present their own variant of truth. Independent media: died in 2008 with the Feral Tribune, possibly the most independent media in Former Yugoslavia area, beginning from 1990.

Bosnia and Herzegovina: First, divide a country in small pieces (in Dayton, back in 1995, which had stopped the War, but did not bring anything else other than peaceful suffering) and have 148 ministers within four levels of authorities (municipal, cantonal, entity and state level – and there is even a fifth, separate, district level for one city-Brčko) for education and divide, which is unavoidable (because, we are different, for God’s sake…nacionalists screamed…being faced with the point that there is no need for the translation of three “different” languages: Bosnian, Croatia and Serbian in Bosnia and Herzegovina…60% of equality of languages, proved by world-known linguistics, shows that in use is only one language, and yet over here there is 80% of equality…so?!) children as known apartheid once upon a time in South Africa and/or Nazi Germany. You can even find in Bosnia and Herzegovina (especially in Middle Bosnia Canton and Herzegovina Neretva Canton) schools in which kids are entering in the same building, but going to different classrooms and having two directors for two schools under one roof and two different professors for the same subject, because…of simply Apartheid, regardless of if we are talking about Bosniaks, Croatian and or Serbs.

What we will do about the others, then? Nothing, and it will happen to them like it happens to in the famous “Sejdić – Finci question” since 2009. Gradually, strategically going towards the history because they are the “others“ and not “our kind of human nationalists”. It has been shown that today’s kids, after 20 years of brain-washing with “my own history, language and geography” do not not know anything about those we are different from them. But then, that was the goal of the gradual strategy for division of education. It has been a very successful one, I have to admit, because, it will not help in the interaction of the cultures and by that improvement of my and/or his/her own culture, but instead a separation of it. For good. In the XXI Century. In the heart of Europe.

In the Balkans Media (il)litteracy has been shown with the unitary and/or nationalistic supression of the truth. There is no “middle of the road“ truth, but one small reflextion of the light within very small group of teachers and students led by Prof. Nenad Veličković from University of Sarajevo within “Školegijum“, who tries to wake up memories on the bright future within education, just if…we interact properly.

Serbia: The myth of Kosovo’s battle in Serbia has been built through the centuries reflecting a lost battle as the victory. The battle was lost in 1389 when Turks won against the Serbian army —  but “we won” Serbian nationalists have screamed through the ages, centuries. Today, Kosovo*, and everybody sees that, is not anymore in any kind of way in Serbia, and it has been recognized as sovereign state by the side of 108 countries in the World. Of course, there are still a lot of things (politically, economically, socially) to be done to be fully recognized by the UN and big-world countries such as Russia and/or Spain, but having the USA, Great Britain and Germany recognize them shows a lot. Nevertheless, let’s go back to the gradual strategy of both sides in regards to their own thoughts about the Kosovo as part of or not part of Serbia: Serbia was teaching everybody that Kosovo is part of Serbia and will never be recognized such as sovereign country by Serbia – especially after delusion of Yugoslavia and losing even small control over it by Serbian authorities.
At the same time the gradual strategy of Kosovo is slow and easy negotitations to gain as much as sovereignty as they can by small, successful steps. Who will win, in the end. No one yet knows,  but we do know who has lost: Both the citizens of Kosovo and Serbia. Why? Check out unemployment rates and recession. Can they physically survive if fed only through a national(istic) vocabulary such as: “We will eat roots of the plaints but Kosovo will stay as a part of Serbia,“ and/or “Kosovo is on its own regardless of the suffering…and we will suffer even more…and stay on its own.“?! What about humanity. Gradual strategy of humanity? Is there any over here. Or this is the real end, my dear friend.

Media (il)litteracy reflection with exclusions of the truths on both sides — and people on both sides are really brainwashed with their “own truth”. No other truth is acceptable but ours, presented in all media in Serbia and/or Kosovo. Just walk on the street in Belgrade and ask either side is Kosovo independent…You might be beaten even.

Montenegro: Majority of Montenegrians over the minority of Serbians. Both with orthodox roots. Two different churches. One God. Same religion. Showing that the language is Montenegrin, and not the Serbian language as it used to be called — even introducing new words within it. Slowly, but surely, nations within the area of the Balkans are shaping them up within their own culture and language what is the preconditions to become real nations. But, what about this: “We are two tribes of the same people. But. The problem is which one!” That is why there are disputes between Serbians and Montenegrians in Montenegro. Serbs were saying that Montenegrians are Serbs and Monetegrians are saying that Serbs in Montenegro are Montenegrians. Where are the humans, after all?

Macedonia: Recent riots against the Government (1,000-3,000 people between 5.5. – 7.5. 2015) on the streets of Capitol of Macedonia, city of Skopje is a reflection of the gradual strategy of both sides that having a stable country is bad for them. Both can exist only within organized anarchy where they can blame each other for all wrong things done in the past. Basically, on the ground is the fight for the authority and money (as shown even within recent coup d’etat in Islamic community of Macedonia).

What about Media (il)literacy? Nothing special Good old story of being controlled by the power of money and authority.

Solution: Simple, as it might be. Education based on scientific knowledge of educators who respect others and different ones and within months it will be changed. The problem is…where to find them (educators) with mentioned quality. And how to give them that power of teaching? The questions arises, but that is good, because practical answers will come, eventually. Without that, even the worst thing that can happen would be as it was back in 1990, after the dissolution of Yugoslavia.
Guess?