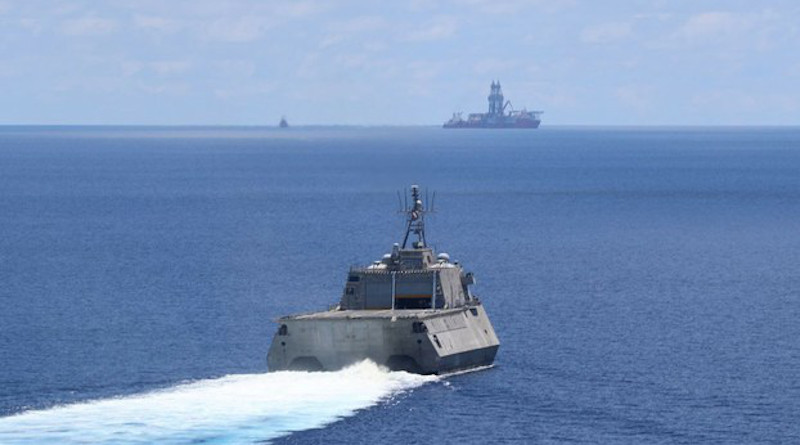 The commander of the U.S. Pacific Fleet called on China to end its “bullying” behavior in the South China Sea as the U.S. sent a warship near the spot where a Malaysian-contracted oil exploration ship is operating and close to a recently deployed Chinese survey vessel.

The U.S. Navy’s 7th Fleet said in a press release that on Thursday it had sent the USS Montgomery and transport ship USNS Cesar Chavez near the West Capella, the oil exploration ship which is operating within Malaysian waters.

The Chinese survey ship Hai Yang Di Zhi 8, escorted by China Coast Guard (CCG) ships and maritime militia, has been conducting a survey nearby since April 15. That is widely viewed as an attempt to intimidate Malaysia out of exploiting resources in waters that China also claims.

The USS Montgomery is the second American littoral combat ship to sail in that area of the South China Sea within two weeks, after the USS Gabrielle Giffords patrolled there on April 26.

“The Chinese Communist Party must end its pattern of bullying Southeast Asians out of offshore oil, gas, and fisheries. Millions of people in the region depend on those resources for their livelihood,” Adm. John Aquilino, commander of the U.S. Pacific Fleet, said in a press release.

Tensions have been rising in the resource-rich South China Sea, which China largely claims for itself, notwithstanding conflicting territorial claims involving five other governments. Assertive behavior at sea and recent Chinese declarations of administrative authority over the contested area have drawn protests from both neighboring countries and the U.S. government.

China frequently sends research vessels, coastguard ships, and paramilitary forces to assert its claims. The CCG is much bigger and better armed than most navies in the region, including that of Malaysia. But experts said that by sending ostensibly civilian law enforcement ships, China increases pressure on its rivals without allowing territorial disputes to spiral into war.

James R. Holmes, a professor of maritime strategy at the U.S. Naval War College, said the recent deployments of U.S. littoral combat ships hint at a new role for these advanced but smaller vessels, which may be better suited to countering gray-zone tactics employed by China.

The U.S. Navy rotates its four littoral combat ships in and out of Singapore’s Changi Naval Base.

“A littoral combat ship, especially one bulked up with naval strike missiles, may provide a good tool for this mission because it outguns anything in the China Coast Guard or maritime militia, yet it’s outclassed by heavy ships from the PLA Navy. It’s intermediate in capability,” Holmes said.

If the U.S. Navy were to send more muscular warships, it would risk looking more provocative than China and potentially escalating the situation, he said.

Malaysia signaled its discomfort when the U.S. sent two bigger warships, the USS America and USS Bunker Hill, on an exercise in the same area on April 18. The littoral combat ships are smaller and less heavily armed.

“For my money this is a form of diplomatic jujitsu we ought to test out in the South China Sea,” Holmes said.

The littoral combat ships ran into numerous difficulties during their development and commissioning into the U.S. Navy. There were originally meant to be 55 of the ships built, but the Navy decided not to acquire any more after the first four, and in February, the Navy’s budget director recommended decommissioning them.

The United States has accused China of exploiting the COVID-19 pandemic to expand its unlawful claims in the South China Sea.

China has said that the Hai Yang Di Zhi 8 survey ship is conducting normal activities and have accused U.S. officials of smearing Beijing.

But adding to the current tensions, China last week announced a unilateral fishing ban in a large area of the South China Sea until Aug. 16, prompting protests from fisheries’ associations in Vietnam and the Philippines.

Her comment follows a conversation Wednesday between U.S. Secretary of State Michael Pompeo and Vietnam’s Deputy Prime Minister Pham Binh Minh. They agreed on the “importance of ensuring freedom of the seas, and the unfettered pursuit of economic opportunity throughout the Indo-Pacific region,” the State Department said in a statement.

One thought on “US Calls For China To Stop Bullying In South China Sea, Sends Second Warship To Survey Site”