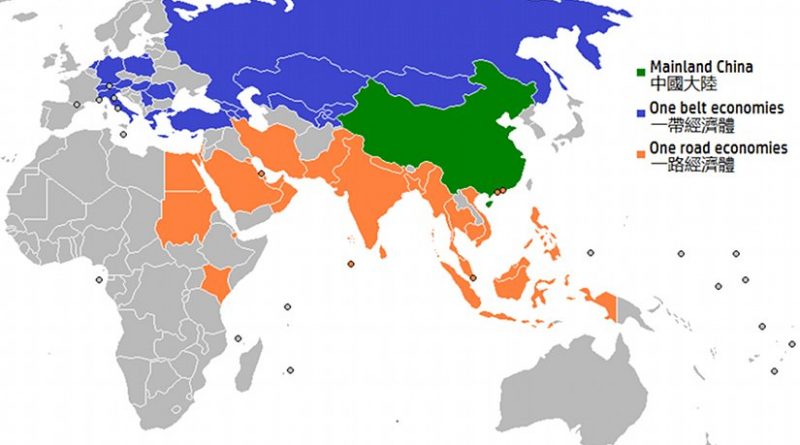 Map of the countries involved in China's One Belt One Road initiative. Map: Tart / Wikimedia Commons

Mid-way through 2013, Xi Jinping presented his government’s most ambitious foreign policy initiative, ‘One belt, one road’, also known as the new Chinese silk roads. It is a strategy that seeks to stimulate the trade, financial, cultural and educational exchanges between the countries of Eurasia and Africa by developing infrastructure and greater coordination of public policies in these regions.

Spain’s status as a founding member of the Asian Infrastructure Investment Bank demonstrates that the country, like others in the EU, is much more interested in the initiative’s economic opportunities than in its geostrategic implications. Various state projects geared towards the private sector have taken this approach further, such as the Conference on Multilateral Partnerships organised by ICEX from 6-8 July 2016 in Beijing, which was aimed at companies in the transport, energy and environmental infrastructure sectors, especially water and the treatment of urban waste.

Conversely, other countries such as the US, Japan and India have shown a greater mistrust of the initiative, thereby hindering both their direct involvement and the success of the project as a whole. Despite the positive attitude of the Spanish political authorities and business leaders, the fact is that for the time being neither the hopes for investment in Spain nor the business opportunities for Spanish companies stemming from the new silk road projects, whether in Spain, China or other countries, have lived up to expectations.

The factors that account for the lack of inward investment in Spain linked to the silk roads are the secondary role that China bestows on Western Europe within the project and the fact that Beijing prefers to locate its Mediterranean anchor sites in places where desperate local needs for investment ensure especially advantageous conditions for their investments, such as in the ports of Piraeus in Greece and Cherchell in Algeria. A highly important factor in this context, which moreover considerably restricts business opportunities for non-Chinese companies, is the condition linked to a large part of the funding offered by Beijing, which makes it subject to the acquisition of products and services supplied by Chinese companies. Note the contrast between the US$40 billion of the Silk Road Fund and the generous bilateral loans granted by Beijing to many of the developing countries along the route of the new silk roads, notably the more than US$50 billion awarded to Pakistan, as opposed to the almost US$1 billion approved to date for multilateral projects by the Asia Infrastructure Investment Bank.

This does not prevent there being cases, both in countries included in the ‘One belt, one road’ initiatives and in other regions, in which Spanish companies win contracts linked to projects benefiting from Chinese financing. This is feasible when the local authorities insist on internationally-accepted technical standards and processes. As long as the greater part of financing for new silk road projects continues being earmarked for projects where the contracts are not tendered for in a transparent and competitive way however, the prospects for Spanish companies’ participation will remain highly limited.

Such normative differences are also a concern to other European countries, as evidenced by the recent EU investigation into the high-speed train line between Belgrade and Budapest, financed by the Export-Import Bank of China, construction of which was awarded to the China Railway International Corporation without any form of public tendering. This is in breach of EU rules, which require public tender processes for large-scale transport projects.

The high-level forum held in Beijing on the new silk roads on 14 and 15 May will present an excellent opportunity to address these questions. The results obtained at the forum may determine the initiative’s prospects for success over the short term, and it is therefore to be hoped that the Chinese authorities are able to make a significant announcement designed to give it fresh impetus. If this does indeed prove to be the case, both the Spanish authorities and companies will undoubtedly be paying close attention in order to seek a greater role in the project.

About the author:
*Mario Esteban, Senior Analyst at the Elcano Royal Institute and Lecturer at the Autonomous University of Madrid | @wizma9