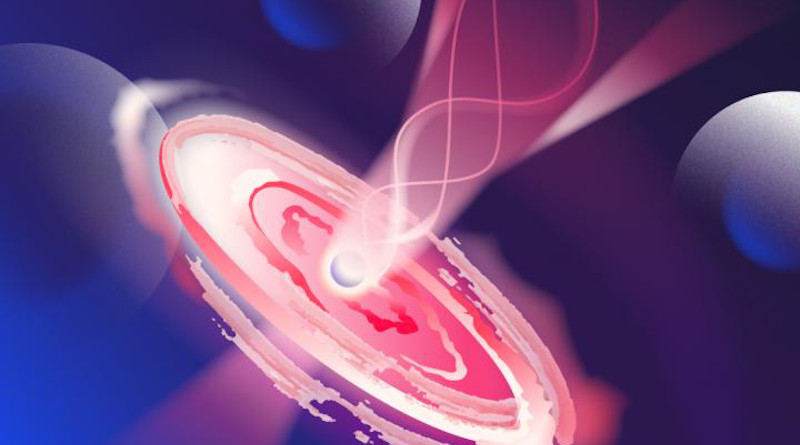 At the center of a quasar, a black hole is surrounded by a spinning accretion disk composed of dust and gas, and there are two oppositely directed plasma jets emanating from it. The shape of the jets changes with distance from the center, and as a result, they look like the famous flared pants. In this artist's rendering, a twisted magnetic field and clouds of interstellar gas can be seen around the jet. CREDIT: Daria Sokol/MIPT Press Office

Researchers from Russia, Germany, Finland and the U.S. have studied more than 300 quasars — spinning black holes that produce beams of plasma. The team has found that the shape of these so-called astrophysical jets changes from parabolic to conical at some distance from the black hole, reminiscent of the iconic flared jeans of the ’70s. By effectively measuring these “cosmic pants,” the researchers aim to interpret the workings of the central engine that accelerates matter to nearly the speed of light at the centers of remote active galaxies. The study is reported in the Monthly Notices of the Royal Astronomical Society.

Beacons of the universe

Quasars are among the brightest objects in the universe, despite being billions of light years away from the Earth. They are sometimes called beacons, and what they help us navigate is not only the remote cosmic past and intricate structure of the universe, but our own planet, too. Because they are so remote, quasars can be used as stable reference points in the sky for measuring the Earth’s rotation and the coordinates of objects on the planet’s surface. This principle underlies GPS, GLONASS, and other positioning systems.

A quasar is so bright it can be discerned from an enormous distance. Shown in figure 1, it hosts a spinning supermassive black hole that weighs up to several billion times as much as our sun. Matter around the black hole falls onto it, carrying a magnetic field. The field lines are akin to wires with charged particles strung on them like beads. Figure 2 illustrates that as the magnetic field lines rotate, plasma accelerates to nearly the speed of light. The resulting outflows are called astrophysical jets, and it is because of them that quasars are such dazzling objects.

Reaching for the sky

Astronomers have previously thought that almost every jet is shaped like a narrow cone, expanding sideways after it leaves the black hole region.

After observing hundreds of quasars for two decades via a network of radio telescopes scattered around the globe, the authors of the new study have challenged this assumption. They produced images of over 300 quasar jets monitored by the MOJAVE program and ran an automated analysis of their shapes. As a result, the team discovered 10 quasars with parabola-shaped jets evolving into cones. This transformation could be discerned owing to the relative proximity of the quasars involved: Each of the 10 turned out to lie “mere” millions of light years away. The “bootleg flaring” occurred at a distance of roughly several dozen light years from the black hole.

“The mechanism behind the formation and acceleration of jets in remote active galaxies has not been fully understood so far, yet it is crucial that we figure out how these cosmic accelerators work,” said Professor Yuri Kovalev from the Moscow Institute of Physics and Technology (MIPT) and Lebedev Physical Institute of the Russian Academy of Sciences.

“The region where jets originate is difficult to discern. It is very compact, and the distance to these objects is so great that everything blurs together. So while multiple theoretical models were available, there were no observational data to test them against. Our study is the first to report the detailed geometry of jets based on observations of large numbers of quasars,” the astrophysicist added.

The geometry of the jet results from an intricate interplay between the internal and external forces, the magnetic field, the plasma, and the interstellar gas. The astrophysicists found an elegant way to account for these factors. A central engine consisting of a spinning black hole and a magnetic field provides a limited power supply and cannot push particles to higher and higher velocities indefinitely, just like a rocket engine. It was known before that plasma speeds up easily only up to a certain point. After that the acceleration is so slow it effectively stops. It is at this point that the pants flare.

“Earlier studies pointed to the shift in quasar jet shape observed in a few galaxies. However, they did not draw the conclusion that it was a property of all quasars rather than the individual objects concerned. We have pinned this effect on the internal characteristics of jets, and that explanation turned out to be neat and intuitive,” commented Dr. Elena Nokhrina from MIPT.

Scientists now have a new way to evaluate the speed of black hole rotation and make sense of the mechanism behind the formation of the incredibly focused and rapid jets of plasma in quasars, which are so bright they are visible from billions of light years away.