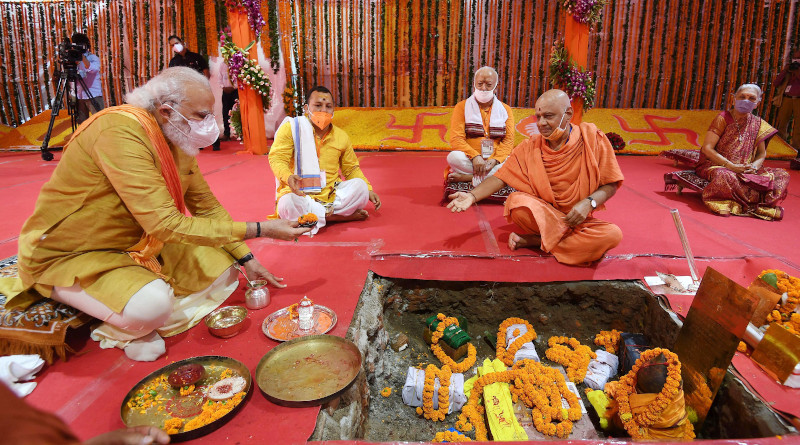 In the 16th century the Mughals, or Moguls, invaded India, stayed and then started the spread of the Islamic religion in the country. Some Hindu families were converted into the Islam religion by coercion and other methods.

In 1608, Britishers entered India as traders and then slowly started occupying the country, when Christianity spread in India. Somel Hindus were converted into Christianity by coercion and other methods.

With the entry of Mughals and Christian Missionaries and the systematically spreading of their religions in India, the threat started on the existentialism of the Hindu religion in India, with little resistance from Hindus for all practical purposes. While savants like Swami Vivekananda espoused the rich philosophy of Hindu religion  and brought it to the attention of some parts of the world and tried to create a sense of pride amongst Hindus, his valiant efforts had little impact on the rapid spread of Islam and Christianity in India at the cost of the Hindu religion.

Many Hindus were helplessly concerned about the reducing number of the Hindu population in India. At this time, many concerned Hindus wanted to build a counter force to protect the Indian philosophy, tradition and culture and Hindu way of life,  which inevitably mean protecting the Hindu religion from further erosion. Thus, emerged the Rashtriya Swayam Sevak Sangh (RSS), a few years before India’s independence, which caught the imagination of a section of Hindus to some extent.

While years have passed and several developments have taken place and even RSS was banned for sometime in India for whatever reasons, the fact is that RSS remains as a force to be reckoned with in India. Attempts to discredit RSS has been continuing, but many people believe that RSS has played a positive role in stemming the onslaught on the existence of the Hindu religion in India. This is the ground reality.

RSS has been claiming that it is essentially a cultural organization, functioning with the objective of conserving and highlighting the traditions and value systems of India, which mean the philosophy of Hinduism. However, the fact is that several members of RSS have been showing interest in political activities, thinking that the attainment of political power is an essential requirement to protect the glory of India and the Hindu religion.

Certainly, a decisive change took place when a pledged member of RSS namely Vajpayee became the Prime Minister of India and later on, another pledged member of RSS namely Narendra Modi became the Prime Minister and stayed on at the job after convincingly winning the national parliamentary election for second term, enjoying a reasonable level of public esteem and popularity.

On the other hand, it is crystal clear that BJP is the political arm of RSS or RSS is the social arm of BJP, with foot soldiers of RSS actively campaigning for BJP in several elections. Both these entities are so closely intervened that one cannot anymore distinguish between RSS and BJP with regard to the goals and objectives.

Earlier, an impression was sought to be created that RSS functions independently and BJP functions independently. But, Prime Minister Narendra Modi has now removed this “curtain” by making the foundation stone laying ceremony of the Ram temple in Ayodhya as an official function and inviting the chief of RSS to participate in the function and the associated religious ceremony.

Obviously, Prime Minister Modi invited the RSS chief with the deliberate intention of establishing the fact and conveying the view to the nation that BJP and RSS are the same with regard to objectives and long term goals. The veil that BJP and RSS are different has now been erased by no less a person than Prime Minster of India.

Unlike the earlier Prime Ministers who were extremely reluctant to be seen  in the public eye as wedded to Hindu philosophy, Narendra Modi has clearly demonstrated his determination to be seen and understood as a Hindu with strong faith in Hindu philosophy and rituals.

In several other countries in the world, it is common for the governments to be officially associated with a particular religion as seen in several Islamic countries and other countries where Christianity is the official religion. This has not been so in India, as India has declared itself as a secular country.

While India continues to remain a secular country, with all religions enjoying similar status and those belonging to minority religions even getting special privileges, it is for the first time that an Indian Prime Minister has asserted the predominant status of the Hindu religion in India.

While the “secularists” in India object to this approach and stand of Narendera Modi, there is nothing wrong or ‘unsecular’ with regard to the approach of Modi, as the basic concept of secularism still stands strong and vibrant in India. A Prime Minister declaring himself as Hindu and adopting Hindu religious practices and his party being associated with another organization (RSS) wedded to spread of Hindu philosophy does not mean that the secular philosophy of India has been given up.

There is certainly nothing inappropriate in declaring that BJP and RSS share the same values and they complement each other.