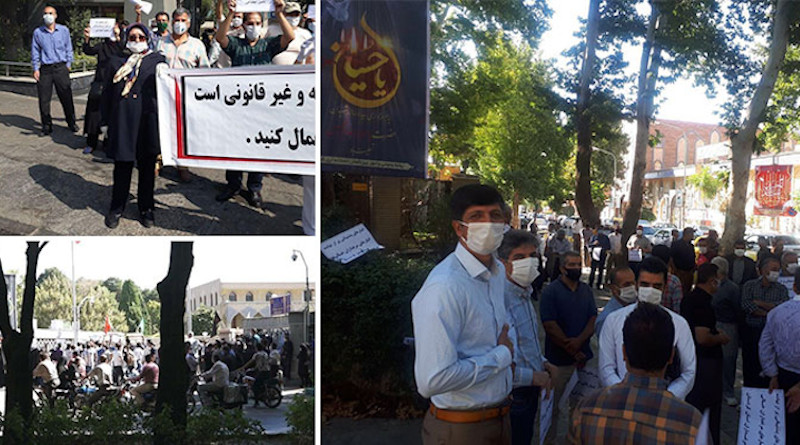 According to collected reports by sources affiliated with the Iranian Resistance in the month of August, Iranians held 331 recorded protests in 82 cities and 26 provinces, with an average of eight protests a day.

Iranians mostly held gatherings to express their economic grievances and demand their unpaid wages. Most of the protests were organized and were held for several days.

There was an increase in the number of protests compared to July, when 237 protests were recorded.

Oil and gas workers in several cities staged protests from the beginning of August to protest their delayed paychecks and benefits, difficult working conditions, and their lack of job security. The strike was initially kicked off by oil and petrochemical workers and was later joined by power plant workers.

The oil and petrochemical workers’ protests eventually spread to 24 cities, in 12 provinces and 55 districts. Managers and contractors tried to stop the workers’ strike by giving them false promises. Reports indicate that some of the workers have received their demand and have gone back to work while others are still on strike.

Other than industrial workers, workers in other sectors held 177 protests in 57 cities.

HEPCO workers in Arak protested for 20 days to protest their delayed paychecks among other things.

Neishabour Telecommunications workers in northeastern Iran protested for over a week against their temporary employment contracts, and not receiving months of their paychecks and insurance.

Workers of a counter manufacturing co. in the northwestern city of Qazvin also staged protests to demand their wages.

Retired Iranian workers receive very meager pensions, which is not given to them in a timely manner. The economic situation is also getting worse and the prices are very high. Pensioners also suffer from various illnesses, aggravated due to the COVID-19 outbreak. Iranian pensioners staged 21 protests in 14 cities during the month of August.

Gathering of preschool teachers in Dezful, protesting their employment.

Gathering of contracted teachers in Tehran to protest their employment status.

Gathering of contracted teachers in Alborz province to protest their employment status.

Gathering of teachers in different Tehran districts for consecutive days to protest their employment status.

Gathering of contracted teachers for consecutive days in Tehran to protest their delayed paychecks.

Gathering of private teachers in Tehran to protest not being employed formally by the Education Ministry.

Kermanshah tomato farmers protested the government’s tomatoes prices which they say is too low. Isfahan farmers in central Iran protested the blockage of Zayandeh Rud River which they use for irrigation, as well as the regime’s negligence toward their farming problems.

Other sectors held 82 protests in 43 cities in August. These include:

Gathering by the families of executed political prisoners in 1988 in Tehran’s Khavaran cemetery.

Gathering of families who lost their loved ones in the Ukraine international flight shot down by the regime in Tehran outside the Ukraine Embassy.

The attack against a police station by the family members of a 13-year-old boy killed by the police in Qahavand village in Hamadan, northwest Iran.

Gathering of political prisoners’ families outside the Mashhad Central Prison, to demand information on the condition of their loved ones in prison.

Gathering and protests by Abolfazl villagers, near Ahwaz, and clashes with the special forces and municipality authorities who had come to demolish their homes.

Gathering of nurses and contracted medical workers in hospitals in Mashhad, to protest the discrimination in their paychecks and low wages.

Gathering of nurses and health workers in Ahvaz to protest their delayed wages, employment status, and lack of job security.

Gathering of nurses in Urmia hospital to protest their living conditions and unpaid wages.

Gathering of doctors and nurses in Shiraz public hospitals to protest their delayed wages.

Gathering of nurses in Isfahan hospitals to protest their delayed wages.

Gathering of emergency doctors to demand their economic grievances.