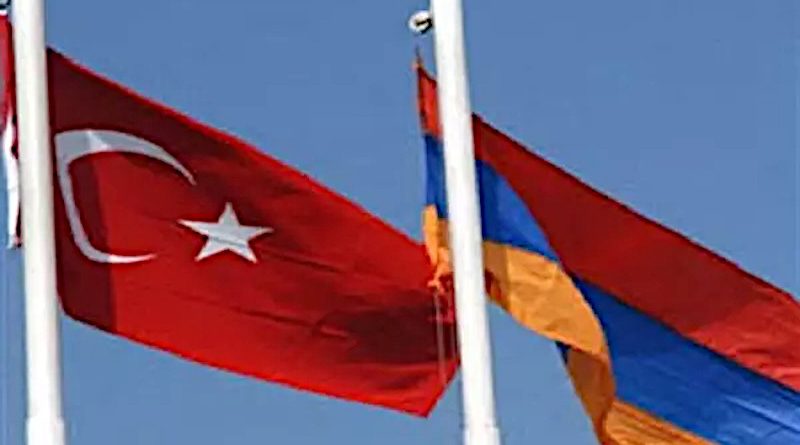 Flags of Turkey and Armenia

Potential Armenia-Turkey rapprochement could have a major influence on South Caucasus geopolitics. The opening of the border would allow Turkey to have a better connection with Azerbaijan beyond the link it already has with the Nakhchivan exclave. Moscow will not be entirely happy with the development as it would allow Yerevan to diversify its foreign policy and decrease dependence on Russia in economy. The process nevertheless is fraught with troubles as mutual distrust and the influence of the third parties could complicate the nascent rapprochement.

Over the past month Armenian and Turkish officials exchanged positive statements which signaled potential rapprochement between the two historical foes. For instance, the Armenian PM Nikol Pashinyan said that he was ready for reconciliation with Turkey “without preconditions.” “Getting back to the agenda of establishing peace in the region, I must say that we have received some positive public signals from Turkey. We will assess these signals, and we will respond to positive signals with positive signals,” the PM stated. Turkey’s President Recep Tayyip Erdogan said Ankara could work towards gradual normalization if Yerevan “declared its readiness to move in this direction.”

On a more concrete level Armenia has recently allowed Turkish Airlines to fly to Baku directly over Armenia. More significantly, Armenia’s recently unveiled five-year government action plan, approved by Armenia’s legislature, states that “Armenia is ready to make efforts to normalize relations with Turkey.” Normalization, if implemented in full, would probably take the form of establishing full-scale diplomatic relations. More importantly, the five-year plan stresses that Armenia will approach the normalization process “without preconditions” and says that establishing relations with Turkey is in “the interests of stability, security, and the economic development of the region.”

So far it has been just an exchange of positive statements, but the frequency nevertheless indicates that a certain trend is emerging. This could lead to intensive talks and possibly to improvement of bilateral ties. The timing is interesting. The results of the second Nagorno-Karabakh war served as a catalyzer. Though heavily defeated by Azerbaijan, Armenia sees the need to act beyond the historical grievances it holds against Turkey and be generally more pragmatic in foreign ties. In Yerevan’s calculation, the improvement of relations with Ankara could deprive Baku of some advantages. Surely, Azerbaijan-Turkey alliance will remain untouched, but the momentum behind it could decrease if Armenia establishes better relations with Turkey. The latter might not be as strongly inclined to push against Armenia as it has done so far, and specifically during the second Nagorno-Karabakh war. The willingness to improve the bilateral relations has been persistently expressed by Ankara over the past years. Perhaps the biggest effort was made in 2009 when the Zurich Protocols were signed leading to a brief thaw in bilateral relations. Though eventually unsuccessful (on March 1, 2018, Armenia announced the cancellation of the protocols), Ankara has often stressed the need of improvement of ties with Yerevan without demanding preconditions.

Beyond the potential establishment of diplomatic relations, the reopening of the two countries’ border, closed from early 1990s because of the Nagorno-Karabakh conflict and Turkey’s solidarity with and military and economic support for Azerbaijan, could also be a part of the arrangement. The opening of the 300 km border running along the Armenian regions of Shirak, Aragatsotn, Armavir, and Ararat could be a game-changer. The opening up of the border is essentially an opening of the entire South Caucasus region. The move would provide Armenia with a new market for its products and businesses. In the longer term it would allow the country to diversify its economy, lessen dependence on Russia and the fragile route which goes through Georgia. The reliance on the Georgian territory could be partially substituted by Azerbaijan-Armenia-Turkey route, though it should be also stressed that the Armenia transit would need considerable time to become fully operational.

Economic and connectivity diversification equals the diminution of Russian influence in the South Caucasus. In other words, the closed borders have always constituted the basis of Russian power in the region as most roads and railways have a northward direction. For Turkey an open border with Armenia is also beneficial as it would allow a freer connection with Azerbaijan. Improving the regional links is a cornerstone of Turkey’s position in the South Caucasus. In a way, the country has acted as a major disruptor. Through its military and active economic presence Turkey opens new railways and roads, thus steadily decreasing Russian geopolitical leverage over the South Caucasus.

As mentioned, both Ankara and Yerevan will benefit from potential rapprochement. It is natural to suggest that the potential improvement between Turkey and Armenia, Russia’s trustful ally, would not be possible without Moscow’s blessing. Russia expressed readiness to help Armenia and Turkey normalize their relations, saying that would boost peace and stability in the region. “Now too we are ready to assist in a rapprochement between the two neighboring states based on mutual respect and consideration of each other’s interests,” the Russian Foreign Ministry spokeswoman, Maria Zakharova, said. Yet, it is not entirely clear how the normalization would suit Russia’s interests. One possibility is that the Armenia-Turkey connection would allow Russia to have a direct land link with Turkey via Azerbaijan and Armenia. However, here too the benefits are doubtful. The route is long and will likely remain unreliable. For Russia trade with Turkey via the Black Sea will remain a primary route.

Presenting a positive picture in the South Caucasus could however be a misrepresentation of real developments on the ground. The Armenian-Turkish rapprochement is far from being guaranteed because of ingrained distrust between the two sides. Moreover, there is also the Azerbaijani factor. Baku will try to influence Ankara’s thinking lest the rapprochement goes against Azerbaijan’s interests. Moreover, as argued above, Russia too might not be entirely interested in the border opening. This makes the potential process of normalization fraught with numerous problems which could continuously undermine rapport improvement.

Thus, realism drives Turkish policy toward Armenia. Ankara needs better connections to the South Caucasus. Reliance on the Georgian transit route is critical, but diversification is no less important. The results of the Second Nagorno-Karabakh war present Turkey and Armenia with an opportunity to pursue the improvement of bilateral ties. Yet, the normalization could be under pressure from external players and deep running mutual distrust. Moreover, the two sides will need to walk a tightrope as a potential blowback from nationalist forces in Turkey and Armenia can complicate the process.