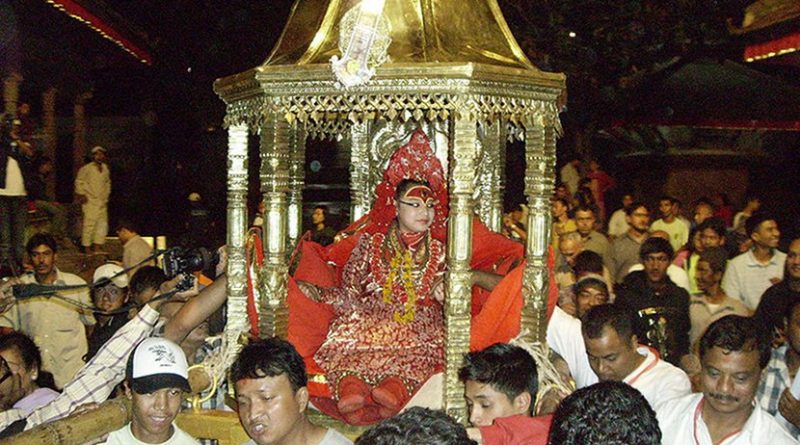 Kumari, "the living goddess," on the eve of the Indrajatra festival in Nepal. Photo by Manjari Shrestha, Wikimedia Commons.

Kumari, literally translating to a ‘pre-pubescent virgin’, is also the name of the living goddess in Nepal chosen at a very young age. They belong to the Shakya caste of the Newars, the same caste Buddha was believed to have hailed from.

It is believed that Taleju, a Hindu demigoddess, resides in the body of the Kumari but any form of heavy blood loss or serious illness would mean the exit of the deity. The Buddhists believe the Kumari to be the manifestation of Vajradevi. A Kumari is chosen by a group of priests, and has to live through her tenure in red and golden clothes and perform various rituals. The tenure gets over upon her first menstruation.

It begins with a search for the new Kumari for which they look for a girl without physical ‘flaws’, for instance, the girl must not have had a single wound on her body. Additionally, she must bear ‘chest of a lion’ and ‘thighs of a deer’ and meet many, many more criteria. After this, they are made to witness animal slaughter and kept in presence of dancing masked men. The Kumari must not flinch at all, even when later she has to spend a night in a room full of dead animals after the sacrifice made earlier the same day. Lastly, she has to choose among various objects, the one belonging to the preceding Kumari. Having cleared all these ‘tests’, she will be chosen.

While the idea of living as a Goddess is very fascinating to some, the truth is that after their tenure they are made to go back and reintegrate with the society they have no contact with whatsoever. This transition from a Goddess worshipped by so many people to being one of them is not easy. For a little girl of three years to live in one confined building and to talk to only a few number of people, it is very difficult to start to mingle with the society later on.

Earlier, during the monarchy period, the Kumari was venerated and worshipped by the Royal family. The kings received blessings from the Kumari every year and it guaranteed their reign for the said year. This is partly because the horoscope of the Kumari was aligned with that of the king so that no harm or conflicts would be caused to the king. This faith and belief from the royal palace translates to a much better lifestyle then in comparison to now. Now, they receive a meagre monthly income of $50 in Kathmandu and as little as $17 in other cities of Lalitpur and Bhaktapur from the government. More importantly, the family of the Kumari also becomes her caretakers meaning the parents have to tend to her full time and they often leave their day jobs in the process. This means that the entire family is supported by one little girl who receives barely any money from the government.

The Kumaris in the past were not given any education because as representations of a deity they were considered to be omniscient. However, with time this has evolved and the Kumaris do receive education from private tutors but this has a direct bearing on the quality of education received. This is because other people, including her tutors, cannot offend or upset her and have to agree to what she says. She cannot communicate with them directly. She cannot touch them. Moreover, this is an equivalent of being home-schooled and going to a normal school in the latter half of her life is very difficult.

A petition was filed in the Supreme Court in 2008, stating that the practice of Kumari was an ‘institutionalised form of discrimination against girl children’, depriving them of their constitutional rights. However, the counter arguments persisted that the members of the Newar community see this as a traditional practice and do not believe this to hurt the child. They further argue that it is a matter of prestige for the said family, and the child is seen as a divine being and is on a higher pedestal as compared to other people and not disadvantaged. Because every community is guaranteed to practice their traditions freely and without question, people from outside the community should not comment on their practices. However, this is objectionable because there are communities in Nepal also involved in other practices like dowry, child marriage, chhaupadi (menstruating women kept in cow sheds), but these have been brought under control via interference by the state and other people.

The Court never decided on this issue and passed the burden on other committees.  However, as a token of culture, tradition, and tourist attraction, a 3-year-old was instated as the Kumari on September 28, 2017, after rigorously checking her for ‘flaws’. She will now be permitted to leave the 15th century temple she will reside in only about 13 times a year, and that too on official occasions. Moreover, her feet are to never touch the ground when she is out of her residence and she will be carried around. She is also not permitted to befriend other people except those approved because of the strict rituals she has to follow as an impersonation of a deity, such as isolation, not being allowed to talk to people, touch them, or step outside her residence. She has caretakers who cater to all her needs but apart from that she will be allowed minimal human interaction. This process is undergone by young girls of 3 years old and sometimes lesser who have very little say in this process just because it is a matter of pride and honour for their families. Her father, filled with mixed emotions claimed to be enthralled to welcome a goddess. She changed into a deity overnight. If this is not deprivation of a normal childhood, then what is?

About the author:
* Aditi Aryalis a student of Social Science and writes about social and developmental issues pertaining to exclusion, inequalities, and gender disparities in the South Asian context.

Home » Kumari: A Tale Of The Living Goddess – OpEd