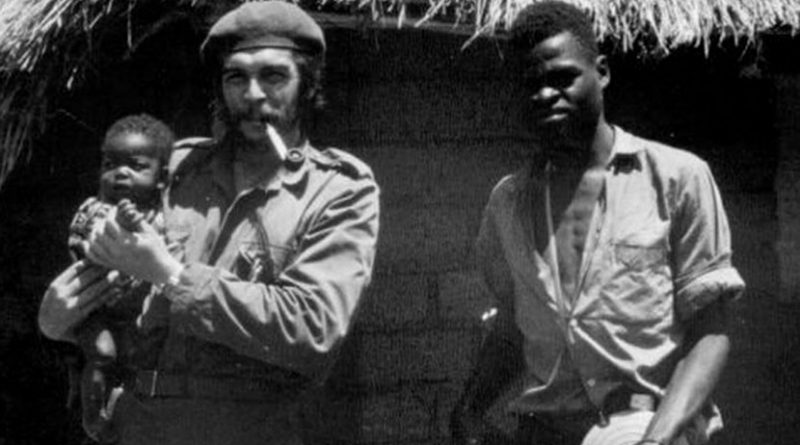 Che Guevara in the Congo in 1965. Wikimedia Commons

On 9 October, 1967, Che Guevara – one of the greatest revolutionaries ever known – was murdered in Bolivia under the orders of Washington. This death was foreseeable. In 1966, Che Guevara had left Cuba to wage an anti-imperialist struggle in the South American nation of Bolivia. The plan was to establish a mother column led by Che in Bolivia, with further guerrilla columns branching out from the main unit to enter the neighboring countries of Argentina, Brazil, Chile and Peru, thus creating a continent-wide revolutionary front. This anti-imperialist plan of action was based on the way Vietnam heroically resisted the full-blown onslaught of American hegemony. As Fidel Castro put it, “In the same measure in which Vietnam resists, the revolutionary liberation movement will grow in other parts of the world. Other fronts of the struggle for liberation will open throughout the world in direct proportion to Vietnam’s resistance.”

The revolutionary class war in Bolivia was not going to be bloodless and Che was fully aware of this. In his speech “Create Two, Three, Many Vietnams” – written in a training camp in Pinar del Río in Cuba before setting out for Bolivia – Che had said: “Wherever death may surprise us, let it be welcome, provided that this, our battle cry, may have reached some receptive ear and another hand may be extended to wield our weapons and other men be ready to intone the funeral dirge with the staccato singing of the machine-guns and new battle cries of war and victory.”

On 30 August, 1967, one of Che’s guerrilla columns was massacred as it crossed the Rio Grande River at a point known as Vado del Yeso. On hearing this news, Bolivia’s President Rene Barrientos offered $4,000 for Che’s capture, dead or alive. Barrientos’ entire efforts at capturing Che were aided and funded by USA. On 28 April, 1967, the US Army had signed a memorandum of agreement with Bolivian forces to create the Second Ranger Battalion aimed at hunting down Che Guevara’s guerrilla band. This battalion was to be trained by a mission of a sixteen-member Green Beret team of US Special Forces, drawn from the 8th Special Forces division of the US Army Forces at Southcom in Panama.

With the entry of the US, Che’s guerrilla army of 50 had to face a military force consolidated by the vast resources of an imperialist empire. The confrontation with such a powerful enemy inflicted great damages on Che’s revolutionary unit. On 26 September, 1967, Che’s detachment had to face an ambush in La Higuera which greatly dented the combative capacity of the guerrillas. In that ambush, many members of the revolutionary group were killed and injured in broad daylight before they could reach the peasant area of Jaguey. While it was dangerous for the guerrillas to advance by daylight along the same route they had been following for days, Che decided to take the risk in order to help a doctor named El Medico whose health was deteriorating.

On 8 October, Che’s guerrilla unit was resting in a ravine named Quebrada de Yuro. While resting, the guerrillas where attacked by a Ranger company that had graduated from the US Army Special Forces training camp in nearby Santa Cruz under the command of Gary Prado. At 1 p.m., Prado ordered encirclement for the capture of the guerrillas. The small group of men who made up Che’s revolutionary vanguard fought heroically until dusk. All those who fought in the positions closest to Che were killed. Meanwhile, Che did his utmost to safeguard the withdrawal of El Medico (who was killed several days later at a place not far from the ravine) to a safer place until he was himself shot in the leg and fell wounded. While the wounds in his legs kept him from walking, comrade Willy assisted and helped him out of the line of fire. The two of them walked straight into a group of soldiers who were loading up a mortar. The soldiers ordered them to surrender. Che responded by firing back his M-2 rifle until a bullet from the soldiers destroyed its barrel, rendering it totally useless. The pistol he carried had no magazine. Now, Che had no option.

After being captured, Che was moved to a school-house in the village of La Higuera where he remained alive for about 24 hours. During the night of 8 October and the next morning, he was interrogated by various officials, including the CIA agent Felix Ramos, one of the Cuban exiles sent by the CIA to participate in the counter-insurgency campaign against the guerrillas. Che refused to answer any questions. On another occasion, he was asked by the deputy commander of the Vallegrande detachment of soldiers, Lieutenant Colonel Andres Selich to “speak badly about Fidel”. He flatly refused to do so. When one of the junior officers, who had drunk too much in celebration of Che’s capture, tried to harass him, he received a punch across the face.

In the morning of 9 October, 1967, a message was radioed into La Higuera from Bolivian high command in La Paz: “Proceed with the elimination of Sr. Guevara”. Elimination was the only option left for imperialists. On the one hand, if they would have prosecuted Che through judicial proceedings, the court would have been transformed into a revolutionary platform by an impassioned orator commanding solid arguments. On the other hand, the imperialists feared that if Che remained alive as their prisoner, sympathizers from all over the world would converge on Bolivia to carry on his fight. Therefore, Che had to be killed.

At around 1 p.m., Sergeant Mario Teran stepped into the room where Che had been kept. He could only see Che growing before him. He was “big, very big, enormous”. “His eyes shone intensely. I was afraid he was going to jump on top of me and with a rapid movement, sever my arm off.” Soon, Teran’s legs began trembling. Sensing Teran’s nervousness, Che said, “Calm yourself, man, and aim well”. “You are only going to kill a man.” Unable to overcome his panic, Teran turned and ran from the schoolhouse. Both Colonel Selich and Colonel Zenteno ordered him to go back and immediately shoot Che. Still trembling, Teran returned to the room and without looking at Che’s face, shot him.

On the day of Che’s killing, Walt Rostow – at that time the National Security Advisor – told President Johnson that unconfirmed information suggests that the Bolivian battalion – “the one we have been training” – “got Che Guevara.” Two days later, Rostow boasted that Che’s death “shows the soundness of our ‘preventive medicine’ assistance to countries facing incipient insurgency – it was the Bolivian 2nd Ranger Battalion, trained by our Green Berets from June-September of this year, that cornered him and got him.” While the American death machine celebrated its imperialist murder of Che, Fidel declared on 18 October, 1967: “They are mistaken when they think that his death is the end of his ideas”.

With his leg maimed, his rifle broken and his pistol emptied, the American imperialists managed to capture and murder Che. While self-congratulating themselves on the murder of this revolutionary human being, Washington strategists tend to forget the sheer absurdity of trying to overpower a revolution through bullets. The essence of Che’s sublime humanity, revolutionary selflessness and fundamentally radical demands continue to diffuse among the oppressed masses. Che’s yearning for a new future where humanity in untarnished by the brutal wounds of imperialism and subjugation continue to invigorate contemporary resistance against neoliberal capitalism. In essence, Che is not dead, his ideas are with us.