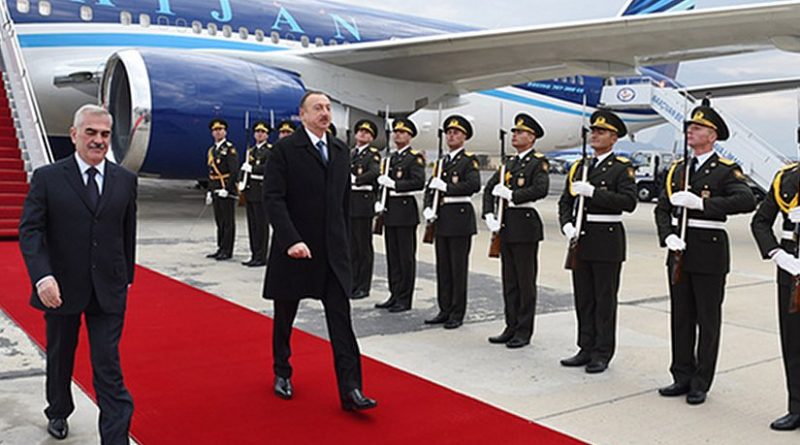 On December 1, 2015 the President of Azerbaijan Ilham Aliyev arrived in the Nakhchivan Autonomous Republic to conduct a working visit and inaugurate a number of impressive public projects in the following sectors: infrastructure, health services, transportation, industrial parks, a renewable energy project and a fresh water supply infrastructure.

During his visit, the Azerbaijani head of state was accompanied by the Chairman of Supreme Assembly of Nakhchivan Mr. Vasif Talibov, and his cabinet of Ministers. In the early morning hours the President of Azerbaijan met with members of the government of Nakhchivan Autonomous Republic, who informed the Azerbaijani leader on many economic accomplishments, led by Nakhchivan’s administration. Afterwards, President Aliyev attended the opening of the Nakhchivan Industrial Complex. The brand new industrial park occupies a total area of nine hectares, it manufactures a number of pervious concrete products in various plants that utilize gypsum, drywall, lime and other materials; automatic management and video surveillance system has also been installed in all its premises. This facility has an annual production capacity of 150,000 tons of pervious concrete.

Moreover, President Aliyev inaugurated the “Eastern Terminal” of the Nakhchivan International Airport. Chairman Vasif Talibov and Mr. Jahangir Asgarov informed the head of state about the recent technical indicators of the terminal and shared the high level convenience indicators that this airport has to offer after its recent remodeling project.

The terminal is equipped with special elevators for passengers with limited mobility; a 41 meter-long baggage conveyor system and escalators were also installed in the terminal. All these additions will allow an increase in the airport`s passenger traffic from 150-200 to 400-450 passengers per hour.

A memorable visit of President Aliyev was his wreath laying ceremony at the statue of national leader Heydar Aliyev in Nakhchivan, located in the center of the city of Nakhchivan. Chairman Vasif Talibov informed the head of state about the landscaping and reconstruction works that have been carried out around the statue.

Additionally, the Azerbaijani head of state attended the opening of Nakhchivan Autonomous Republic Hospital. The hospital facility was commissioned in 1920 as Nakhchivan’s hospital. The construction of the building of the Nakhchivan Autonomous Republic Hospital started in 1979 with the support of national leader Heydar Aliyev, and ended in 1987. The reconstruction of this hospital started in early 2013 and completed at a record timing.

In one of the afternoon events, President Ilham Aliyev, accompanied by Chairman Vasif Talibov, attended the opening of Nakhchivan Solar Power Plant.

President of the Republic of Azerbaijan Ilham Aliyev has attended the opening of Nakhchivan Solar Power Plant nearby Khal-khal village of Babek district. The power plant occupies an area of 35 hectares. The 20 megawatts plant is a project implemented under an agreement between the State Energy Agency of Nakhchivan Autonomous Republic and the Belgian Soltech Company. In the project, more than 78,684 modern glass solar panels, stands and 11 electric power substations were installed as well as more than 30 different types of techniques and more than 400 workers have been involved. Nakhchivan Solar Power Plant will produce more than 30 million kilowatt-hours of electricity per year. After greeting the employees of the State Energy Agency of Nakhchivan Autonomous Republic and a representative of Soltech Company, President Aliyev wrapped up his very intensive working visit and departed for Baku, from the Nakhchivan International Airport.

This was perhaps the most important visit that President Aliyev has led in 2015.