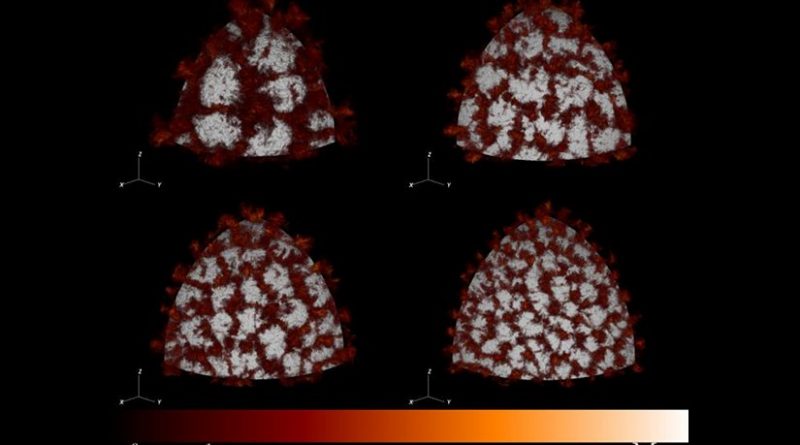 "Outflows" (red), regions where plumes of hot gas escape the intense nuclear burning at a star's surface, form at the onset of convection in the helium shell of some white dwarf stars. This visualization depicts early convection on the surface of white dwarf stars of different masses. Credit: Adam Jacobs, Stony Brook University

Exploding stars may seem like an unlikely yardstick for measuring the vast distances of space, but astronomers have been mapping the universe for decades using these stellar eruptions, called supernovas, with surprising accuracy.

Type Ia supernovas–exploding white dwarf stars–are considered the most reliable distance markers for objects beyond our local group of galaxies. Because all Type Ia supernovas give off about the same amount of light, their distance can be inferred by the light intensity observed from Earth.

These so-called standard candles are critical to astronomers’ efforts to map the cosmos. It’s been estimated that Type Ia supernovas can be used to calculate distances to within 10 percent accuracy, good enough to help scientists determine that the expansion of the universe is accelerating, a discovery that garnered the Nobel Prize in 2011.

But despite their reputation for uniformity, exploding white dwarfs contain subtle differences that scientists are working to explain using supercomputers.

A team led by Michael Zingale of Stony Brook University is exploring the physics of Type Ia supernovas using the Titan supercomputer at the US Department of Energy’s (DOE’s) Oak Ridge National Laboratory. Titan is the flagship machine of the Oak Ridge Leadership Computing Facility (OLCF), a DOE Office of Science User Facility located at ORNL. The team’s latest research focuses on a specific class of Type Ia supernovas known as double-detonation supernovas, a process by which a single star explodes twice.

This year, the team completed a three-dimensional (3-D), high-resolution investigation of the thermonuclear burning a double-detonation white dwarf undergoes before explosion. The study expands upon the team’s initial 3-D simulation of this supernova scenario, which was carried out in 2013.

“In 3-D simulations we can see the region of convective burning drill down deeper and deeper into the star under the right conditions,” said Adam Jacobs, a graduate student on Zingale’s team. “Higher mass and more burning force the convection to be more violent. These results will be useful in future studies that explore the subsequent explosion in three-dimensional detail.”

By capturing the genesis of a Type Ia supernova, Zingale’s team is laying the foundation for the first physically realistic start-to-finish, double-detonation supernova simulation. Beyond capturing the incredible physics of an exploding star, the creation of a robust end-to-end model would help astronomers understand stellar phenomena observed in our night sky and improve the accuracy of cosmological measurements.

These advances, in addition to helping us orient ourselves in the universe, could shed light on some of humanity’s biggest questions about how the universe formed, how we came to be, and where we’re going.

All Type Ia supernovas begin with a dying star gravitationally bound to a stellar companion. White dwarfs are the remnants of Sun-like stars that have spent most of their nuclear fuel. Composed mostly of carbon and oxygen, white dwarfs pack a mass comparable to that of the Sun in a star that’s about the size of the Earth.

Left to its own devices, a lone white dwarf will smolder into darkness. But when a white dwarf is paired with a companion star, a cosmic dance ensues that’s destined for fireworks.

To become a supernova, a white dwarf must collide with or siphon off the mass of its companion. The nature of the companion–perhaps a Sun-like star, a red giant star, or another white dwarf–and the properties of its orbit play a large role in determining the supernova trigger.

In the classic setup, known as the single-degenerate scenario, a white dwarf takes on the maximum amount of mass it can handle–about 1.4 times the mass of the Sun, a constraint known as the Chandrasekhar limit. The additional mass increases pressure within the white dwarf’s core, reigniting nuclear fusion. Heat builds up within the star over time until it can no longer escape the star’s surface fast enough. A moving flame front of burning gases emerges, engulfing the star and causing its explosion.

This model gave scientists a strong explanation for the uniformity of Type Ia supernovas, but further tests and observational data gathered by astronomers suggested there was more to the story.

“To reach the Chandrasekhar limit, a white dwarf has to gain mass at just the right rate so that it grows without losing mass, for example by triggering an explosion,” Jacobs said. “It’s difficult for the classic model to explain all we know today. The community is more and more of the belief that there are going to be multiple progenitor systems that lead to a Type Ia system.”

The double-detonation scenario, a current focus of Zingale’s team, is one such alternative. In this model, a white dwarf builds up helium on its surface. The helium can be acquired in multiple ways: stealing hydrogen from a Sun-like companion and burning it into helium, siphoning helium directly from a helium white dwarf, or attracting the helium-rich core remnant of a dying Sun-like star. The buildup of helium on the white dwarf’s surface can cause a detonation before reaching the Chandrasekhar limit. The force of this sub-Chandrasekhar detonation triggers a second detonation in the star’s carbon-oxygen core.

“If you have a thick helium shell, the explosion doesn’t look like a normal Type Ia supernova,” Jacobs said. “But if the helium shell is very thin, you can get something that does.”

To test this scenario, Zingale’s team simulated 18 different double-detonation models using the subsonic hydrodynamics code MAESTRO. The simulations were carried out under a 50-million core-hour allocation on Titan, a Cray XK7 with a peak performance of 27 petaflops (or 27 quadrillion calculations per second), awarded through the Innovative and Novel Computational Impact on Theory and Experiment, or INCITE, program. DOE’s Office of Nuclear Physics also supported the team’s work.

By varying the mass of the helium shell and carbon-oxygen core in each model, MAESTRO calculated a range of thermonuclear dynamics that potentially could lead to detonation. Additionally, the team experimented with “hot” and “cold” core temperatures–about 10 million and 1 million degrees Celsius, respectively.

In three-dimensional detail, the team was able to capture the formation of “hot spots” on the sub-Chandrasekhar star’s surface, regions where the star cannot shed the heat of burning helium fast enough. The simulations indicated that this buildup could lead to a runaway reaction if the conditions are right, Jacobs said.

Using the OLCF’s analysis cluster Rhea, Zingale’s team was able to visualize this relationship for the first time.

Before translating its findings to the next step of double detonation, called the ignition-to-detonation phase, Zingale’s team is upgrading MAESTRO to calculate more realistic physics, an outcome that will enhance the fidelity of its simulations. On Titan, this means equipping the CPU-only code to leverage GPUs, which are highly parallel, highly efficient processors that can take on heavy calculation loads.

Working with the OLCF’s Oscar Hernandez, the team was able to offload one of MAESTRO’s most demanding tasks: tracking stars’ nucleus-merging, energy-releasing process called nucleosynthesis. For the double-detonation problem, MAESTRO calculates a network of three elements–helium, carbon, and oxygen. By leveraging the GPUs, Zingale’s team could increase that number to around 10. Early efforts to program the OpenACC compiler directives included in the PGI compiler indicated a speedup of around 400 percent was attainable for this part of the code.

The GPU effort benefits the team’s investigation of not only Type Ia supernovas but also other astrophysical phenomena. As part of its current INCITE proposal, Zingale’s team is exploring Type I x?ray bursts, a recurring explosive event triggered by the buildup of hydrogen and helium on the surface of a neutron star, the densest and smallest type of star in the universe.

“Right now our reaction network for x-ray bursts includes 11 nuclei. We want to go up to 40. That requires about a factor of 16 more computational power that only the GPUs can give us,” Zingale said.

Maximizing the power of current-generation supercomputers will position codes like MAESTRO to better take advantage of the next generation of machines. Summit, the OLCF’s next GPU-equipped leadership system, is expected to deliver at least five times the performance of Titan.

“Ultimately, we hope to understand how convection behaves in these stellar systems,” Zingale said, “Now we want to do bigger and better, and Titan is what we need to achieve that.”