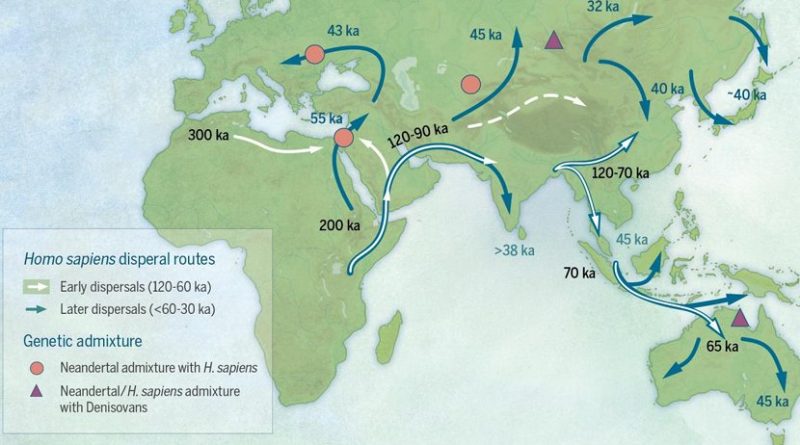 Most people are now familiar with the traditional “Out of Africa” model: modern humans evolved in Africa and then dispersed across Asia and reached Australia in a single wave about 60,000 years ago.

However, technological advances in DNA analysis and other fossil identification techniques, as well as an emphasis on multidisciplinary research, are revising this story. Recent discoveries show that humans left Africa multiple times prior to 60,000 years ago, and that they interbred with other hominins in many locations across Eurasia.

A review of recent research on dispersals by early modern humans from Africa to Asia by researchers from the Max Planck Institute for the Science of Human History and the University of Hawai’i at Manoa confirms that the traditional view of a single dispersal of anatomically modern humans out of Africa around 60,000 years ago can no longer be seen as the full story.

The analysis, published in the journal Science, reviews the plethora of new discoveries being reported from Asia over the past decade, which were made possible by technological advances and interdisciplinary collaborations, and shows that HomoSapiens reached distant parts of the Asian continent, as well as Near Oceania, much earlier than previously thought. Additionally, evidence that modern humans interbred with other hominins already present in Asia, such as Neanderthals and Denisovans, complicates the evolutionary history of our species.

New model: Multiple dispersals of modern humans out of Africa, beginning as early as 120,000 years ago

The authors brought together findings from multiple recent studies to refine the picture of human dispersals out of Africa and into Asia. While scientists once thought that humans first left Africa in a single wave of migration about 60,000 years ago, recent studies have identified modern human fossils in far reaches of Asia that are potentially much older. For example, H. sapiens remains have been found at multiple sites in southern and central China that have been dated to between 70,000 and 120,000 years ago. Additional finds indicate that modern humans reached Southeast Asia and Australia prior to 60,000 years ago.

“The initial dispersals out of Africa prior to 60,000 years ago were likely by small groups of foragers, and at least some of these early dispersals left low-level genetic traces in modern human populations. A later, major ‘Out of Africa’ event most likely occurred around 60,000 years ago or thereafter,” explained Michael Petraglia of the Max Planck Institute for the Science of Human History.

Recent genetic research has resolved the question of whether or not modern humans interbred with other ancient hominins – they definitely did. Modern humans interbred not only with Neanderthals, but also with our recently-discovered relatives the Denisovans, as well as a currently unidentified population of pre-modern hominins.

One estimate is that all present-day non-Africans have 1-4% Neanderthal heritage, while another group has estimated that modern Melanesians have an average of 5% Denisovan heritage. In all, it is now clear that modern humans, Neanderthals, Denisovans and perhaps other hominin groups likely overlapped in time and space in Asia, and they certainly had many instances of interaction.

The increasing evidence of interactions suggests that the spread of material culture is also more complicated than previously thought.

“Indeed, what we are seeing in the behavioral record is that the spread of so-called modern human behaviors did not occur in a simple time-transgressive process from west to east. Rather, ecological variation needs to be considered in concert with behavioral variation between the different hominin populations present in Asia during the Late Pleistocene,” said Christopher Bae of the University of Hawai’i at Manoa.

In light of these new discoveries, our understanding of human movements across the Old World has become much more complex, and there are still many questions left open. The authors argue for the development of more complicated models of human dispersals and for conducting new research in the many areas of Asia where none has been done to date.

Additionally, it will be important to review materials collected prior to the development of modern analytic methods, to see what more can now be learned from them.

“Fortunately,” said Katerina Douka, also of the Max Planck Institute for the Science of Human History, “there have been an increasing number of multidisciplinary research programs launched in Asia over the past few decades. The information that is being reported is helping to fill in the gaps in the evolutionary records.”

“It is an exciting time to be involved with interdisciplinary research projects across Asia,” added Bae.

Home » Revising Story Of Dispersal Of Modern Humans Across Eurasia